Silvena Rowe In Dubai: What do we Think?

A couple of months back, I told you about a chef who was going to move to Dubai and set up shop, and I was pretty excited. Silvena Rowe meant something to me that tickled a nerve – she meant that maybe we would see a grander scale movement towards modern middle eastern cooking in this city’s restaurants. 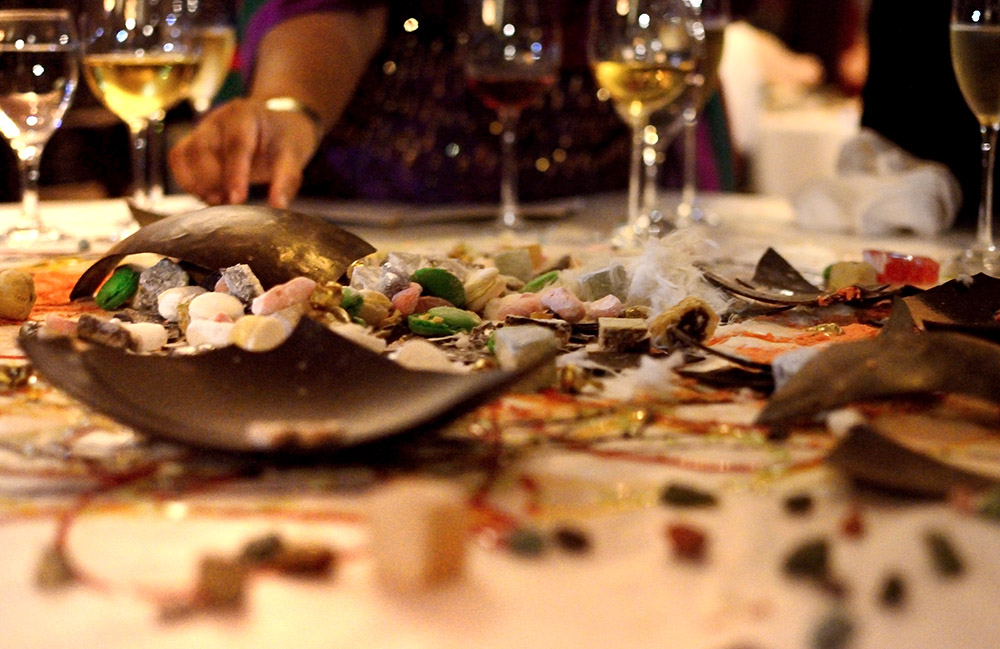 A couple of months back, I told you about a chef who was going to move to Dubai and set up shop, and I was pretty excited. Silvena Rowe meant something to me that tickled a nerve – she meant that maybe we would see a grander scale movement towards modern middle eastern cooking in this city’s restaurants. Well, she’s arrived, softly landing into a role as consulting chef at the H hotel, and as yet to open her own establishment as promised. So now, after two meals cooked by her, and a month with her cookbook I can start to tell you a little bit about her particular flavour.

Meal one was at the Capital Club…
It’s a strange venue, and I don’t think it’s changed much since I last visited (pre-GFC) in 2008. It’s still got that stuffy gentleman’s club vibe, with plush red carpets, dim lights, leather seating, simpering service staff and a pervading smell of old Armagnac and older money. Or, considering we’re in Dubai, it’s probably a scent of new money made to look like old… A baby grand sits untouched in the entry, shining like a pair of patent leather spats. Pretty hostesses with manicures better than mine direct diners to tables, and when I was seated, I squirmed, feeling out of place. Like I really should be rich enough be able to write a ten-thousand dollar cheque for a charity they might just ask me to spontaneously fund-raise for, or perhaps that I was an elderly, overweight escort who accidentally got sent on the job that that should have been reserved for someone younger and sleeker. It’s a curious place to find a firecracker like Silvena Rowe, but funnily enough, when she walked out to speak, it seemed very much like she’d settled right in.

On this night, her menu was a fusion of Asian styles and European ingredients, which fell together as seamlessly as the paradoxically perfect combination of her unpretentious nature and the pompous room. Entree was savoury baklava towers – cigars propped like the monoliths of Sheikh Zayed road, and stuffed with melt-in-the-mouth foie gras or spiked labne, and surrounded by construction debris – colourful and al-dente seasonal vegetables and edible flowers. A second of soft-shell crab followed, lightly coated in batter, crisp-fried and placed atop a laksa-style soup the colour of a Jumeirah lawn in summer. All the flavours of a green curry without the spice, and therefore trained to the region’s palates nicely. Main was black cod, a fish we more commonly see in Japanese restaurants, but this time glazed with sumac and pomegranate molasses. It’s a powerful, buttery fish, almost extreme in flavour, and was interesting to see in a glaze with differences to it’s normal teriyaki-style dressing.

Dessert was everything I hoped for. Tables were cleared and covered with the same kind of plastic sheets you’ll find on the floor (which of course is also the table) in a Yemeni Mandi restaurant. Waiters marched out armed with squeezie bottles, and shot them all over our table, then followed with baby bombs of sherbet and chocolate rocks from the spice souq. Shortly after, Ms Rowe herself stepped out with a basketball-sized easter egg, which she proceeded to unceremoniously dump from a height into the middle of the table. This dark chocolate pinata burst, flinging sugary shrapnel in all directions. Turkish delight, persian fairy floss, chocolate, candied pistachios, macarons, the most pillowy-soft home-made marshmallows and more were splayed across a square metre of the centre of every table in the room. Phones came out as quickly as guns from holsters in a show-down, and before we had our first mouthfuls, the entire room had Instagramed and tweeted the images until it became old-hat. Then we ate like six-year-olds on Easter sunday morning, the stuffiness of the surroundings melting with our chocolate smiles and sugar-rushes. It’s amazing how a dessert can bring people together.

Meal two was iftar at the H hotel…

It’s a tricky thing putting on an iftar in Dubai. Firstly, it has to be a buffet. Next, you have to include the classics for all the sticklers to tradition. Then, you have to put in some smashing new dishes that make a statement about the venue and the chef, yet sit in harmony next to things like shawarma and umm ali. You have to wrap this all up in a package that presents value for money, for both the people who have been fasting all day and will probably want to eat quite a bit over an extended period of time, but also for those who havent been fasting, yet have been to six iftars in the last nine days, and just want a salad and a bowl of icecream.

Well our table contained all of the above tastes and needs, and we ended up leaving saying “best iftar ever” – how did she do it?

First – the action. There was a working kitchen of course, with chefs carving from the roastery and the whole baked lamb. Then, there was the saj bread makers, and the shawarma dudes. There was a friendly man walking around with a traditional urn dispensing a coconut milk drink, and a shrine to Kunafe behind red velvet curtains to the side. Oh, and the oud player of course, who was very good. But the treat was the mastic-man, who kneaded dondurma ice-cream with a paddle then played games with the kids, making them work to catch their cone. Barrel of laughs. Oh, and then there was the market, which was in the lobby for when you needed a little break from the food or the kids. We didn’t even use the playroom (they do have a majlis just for the little ones) – we were all having so much fun we forgot.

Secondly, the traditional food. All the classic drinks I had mentioned in my previous post (barring kharoub) were there. Nearby, to break your fast gently were over ten different varieties of dates. There were some of the more traditional dishes – tender, flakey ouzi of course, shawarma, a range of grills and salads that you’d expect to see, and plenty of conventional arabic mezze and dips. Superb Kunafe as mentioned, baklava, umm ali and more were also available. All were super, especially the little quinelles of labne with sumac, and the freshly rolled shawarma (yes, I mixed the two).

Thirdly, it was the slightly less traditional Arabic food. Here many dishes took on a northern african slant yet were cooked in a modern way, lighter and without the heavy greasy feeling that can come with the region’s dishes. The highlights were some juicy lamb cutlets coated in a caramelised fruit crust, bastilla (pastilla), a chicken, cinamon and nut pie with flakey pastry and an icing-sugar dust, the stuffed baby squid that had my husband writhing with pleasure, and the tagines, bursting with aroma and flavour – especially the carrot and couza, which you would assume would be boring, but was the complete opposite. Oh, and how could I forget the lamb and pistachio kofta? Dessert was so good, I can’t go through them all, but the most surprising was a tahini and vanilla pannacotta with strawberry gel that was delicately flavoured and with none of the mouth-drying texture I usually find in halva. After years of loathing the chalky stuff in plastic tubs that everyone else seems to like, this dish has single-handedly turned my biased view of tahini used for sweets.

If you want to see Silvena Rowe in action yourself, the best way to do it is to head down to iftar at Mizaan or Arcadia at the H before it’s all over (last iftar on August 6 or 7). If you don’t make it by then, don’t worry, she’s sticking around at the H for the time being, and is planning a regular Saturday mezze affair for after Ramadan. You can also follow @ChefSilvenaRowe on twitter for regular updates.

Disclaimer: I was the guest of Silvena Rowe. I would have paid for both happily, and this has not impacted on the review.