Pork, Alcohol and Qatar: Setting the Limits to ‘Modernity’ and Global Ambition 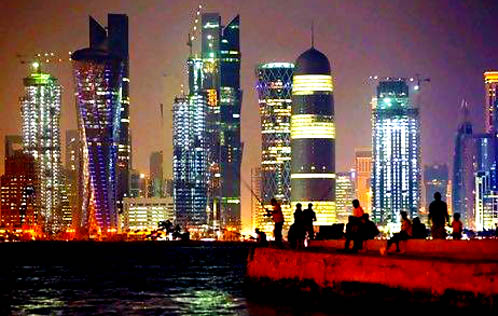 Qatar’s debate about allowing alcohol and the sale of pork amounts to far more than a discussion about adherence to the energy-rich Gulf state’s constitution and laws; it is a debate about the powers of the country’s ruler and its national identity.

The outcome of the debate will not only determine the future of Qatar’s effort to become a global sports hub – a key pillar of the national identity Emir Hamad Bin Khalifa al-Thani is seeking to shape – but also its positioning as a forward-looking sponsor of change in a region stretching from the Atlantic coast of Africa to the Gulf that is wracked by anti-government protests and convoluted transitions to more open societies.

It is a debate that is being closely monitored by critics of world soccer body FIFA’s decision to award Qatar the hosting of the 2022 World Cup; a wide-range of sports officials and athletes who anticipate a Qatari bid for the 2020 Olympic Games and the 2019 World Athletics Championships; and policy makers and pundits across the globe.

Caught on camera by CBS News in April of last year, US President Barak Obama described Sheikh Hamad as “a big booster of democracy all throughout the Middle East,” but noted that “he himself is not reforming significantly.” Mr. Obama suggested that Qataris with a per capita annual income of $145,000 felt little urge to rock the boat. Emir Hamad has since Mr. Obama’s quip announced elections next year for a royal advisory body. Qatar’s debate on moral mores nontheless appears to contradict Mr. Obama’s assessment.

The debate attracted international attention following last month’s unexplained banning of alcohol in restaurants on Qatar’s man-made island, The Pearl, which says it aims to “redefine an entire nation” and is popular with Qatar’s growing expatriate community, as well as online calls by Qatari nationals for a boycott of state-owned Qatar Airways because of its serving on-board of alcohol and recent introduction of the sale of pork in a shop it owns in the capital Doha.

The debate about the country’s national identity is particularly sensitive given that Qatari nationals account for approximately only one quarter to one third of the country’s 1.7 million inhabitants with foreign labour and expatriates forming a majority at a time that the relationship between rulers, governments and the public across the Middle East and North Africa is being redefined.

“Our goal is to create a dialogue that resonates with and talks to the youth. This is an opportunity to inspire and engage young people…. Sports are at the heart of Qatar’s development… Sports like education and arts are part of our national identity,” Noora Al Mannai, CEO of Qatar’s bid to win the right to host the 2020 Olympic Games, told a recent brainstorm in Qatar designed to define the role of government, NGOs and business in sports.

Ms. Al Mannai said “empowering young people” was one reason for the bid alongside Qatar’s efforts to mediate conflicts and reduce regional obesity and diabetes levels.

The ban of alcohol on The Pearl extends beyond public venues to the kitchen, where one resident, Jenifer Fenton, writing on Arab News Blog, said it could also not be used for cooking. Restaurateurs and residents have yet to receive a justification for the ban. The ban does not affect major hotels in Doha that are allowed to sell alcohol to non-Muslims or the Qatar Airways shop that sells alcohol and pork to licensed foreign nationals for private consumption.
Speculation about the reasoning includes the ruler and the government wanting to project a more pious image in advance of the country’s first election of a royal advisory body to rumours of a financial dispute between the government and the resort’s developers.

Qatar has long sought to differentiate its interpretation of the teachings of the 18th century puritan warrior priest, Mohammed Abdul Wahhab, from that of strict Saudi Arabia where in contrast to Qatar women are severely restricted and Islamic law is rigorously applied to all not just Muslims and Saudi nationals.

The debate is likely to engender empathy in the Gulf and elsewhere in the Middle East and North Africa as Islamist forces emerge as winners from the popular revolts sweeping the region.

Nonetheless, it has sparked concern among secularists in Tunisia where the Islamist Ennahada party won the first elections following last year’s overthrow of President Zine el Abedine Ben Ali that the country may focus more on relations with the Gulf than on its traditional ties to Europe. Ennahada officials were quick to assert during Sheikh Hamad’s recent visit to Tunisia to mark the first anniversary of the toppling of Mr. Ben Ali that the country would not jeopardize its relations with Europe but was basing its foreign policy on achieving the revolution’s goals.

Qatari critics of alcohol argue that the emir’s tolerance violates the country’s constitutions and laws which do not grant the emir the prerogative to allow its sale or consumption. In doing so, the critics are implicitly sparking a rare debate about the powers of the ruler.

Hassan Al Sayed, a professor of constitutional law and former dean of the College of Law at Qatar University, says according to Ms. Fenton, that there is no Qatari law that allows for the sale of alcohol and that in fact several laws, including the constitution, criminalize it. Even “if there is any decision coming for example from the Emir or any department here (legalizing alcohol)… no in fact, this is not okay and this is against the law,” Ms. Fenton quotes Mr. Al Sayed as saying.

Mr. Al Sayed says that for Qatar to legally allow the sale and consumption of alcohol it must change its constitution, which in article 1 stipulates that “Islam is the State’s religion and the Islamic Sharia is the main source of its legislations.” Mr. Al Sayed argues that the legal ban applies also to free zones the government said it would create for fans attending the 2022 World Cup.

A majority of Qataris is likely to oppose constitutional reform out of fear that the country would lose its Islamic identity, a key element in the national identity it is trying to shape.

Restaurant executives are optimistic that the ban will be lifted and that Qatar is not on the verge of declaring itself dry. The recent resignation of Khalil Sholy, the managing director of United Development Company (UDC), the developer of The Pearl, has fuelled hopes of a resolution.

That however could take several months. UDC said in a statement posted on the Qatar Exchange that Mr. Sholy will retain his powers as managing director and president for three months “to assist the person who will be elected by the board of directors to fill the position.”