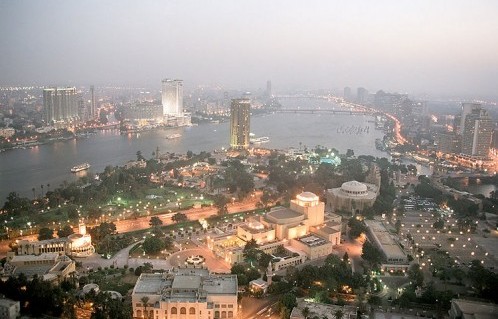 Cairo isn’t getting on my nerves as much as it did the last time I was here. The key, I think, is to have low (or at least appropriate) expectations.

Some of the wealthiest parts of this city look like the dreariest sections of communist-era Romania. At the same time, though, I’m finding it slightly easier to find a decent restaurant and an aethetically pleasing café to hang out in. The economy does seem to have advanced somewhat in the years I’ve been away, at least in the richer parts of the city. (The poorer neighborhoods look just as brutally run-down as they did before, and they’re probably suffering more now that the post-Mubarak economy is on the skids.)

Here’s something that’s unusual in the Arab world: there are no posters of a dictator anywhere. The government is a military junta, but it’s not entirely clear which individual is in charge of this place. It feels like nobody is.

Hardly any tourists are here right now. Political turmoil has driven all but the hardiest and most adventurous away, though this isn’t Damascus where the regime is machine-gunning dissidents by the hundreds. And it seems the touts who prey on foreign visitors have given up and are staying home because I am not being hassled on the street nearly as much as I was a few years ago. Almost everyone I’ve met so far, from my hotel staff to my interview subjects, is exceptionally polite and pleasant to be around. Arabs are taught good manners by their parents and their culture, and Egypt, now that most of the touts have crawled back under their rocks, feels more gentle and welcoming than it did before.

We’ll see if I still feel the same way after hanging out with thousands of revolutionaries—including the Muslim Brotherhood and the Salafists—in Tahrir Square.