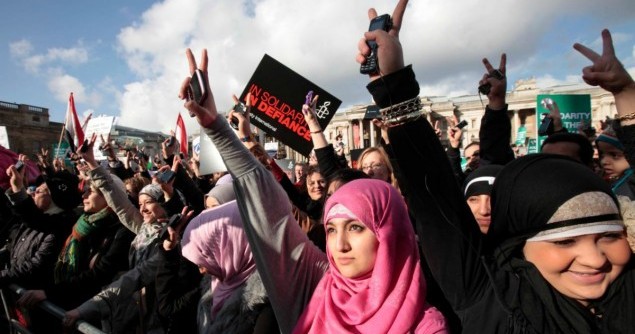 The idea that the West and Middle East have extremely different views on gender equality has gained traction in recent years. However, feminists and progressive activists in the West and the Middle East share many values when it comes to gender equality. A deeper look at the diverse examples of feminist activism shows that the two regions have more in common than one might think.

In both Western and Middle Eastern societies, aspects of liberal feminism have gained traction, particularly an emphasis on increasing opportunities for women’s access to education and work. A majority of citizens in Muslim majority countries – over 60 per cent, according to the World Values Survey (WVS) – disagree with the notion that a university education is more important for a man than for a woman.

There are still barriers to girls’ education, particularly in rural areas where some families lack the resources to educate all of their children or where schools are too far from their homes. Yet despite these challenges, female education in Arab countries has made some of the biggest gains in the world with literacy rates more than doubling and the gender enrolment gap dramatically decreasing since 1970.

At the same time, there is also growing acceptance of women working. According to the WVS, 77 per cent of Egyptian youth support a woman’s right to hold any job for which they are qualified. In addition, the Kuwaiti women’s labour force participation rate of 45 per cent is one of the highest in the Middle East, according to United Nations data. Even religiously conservative women in both the Middle East and the West embody these aspects of liberal feminism. While they focus on the importance of women’s roles as wives and mothers, women activists in Islamic groups are largely educated professionals – just as female activists on the Christian right in the United States often work outside of the home.

The diversity of feminist positions in the Middle East may be surprising to some in the West. Some feminists are secular and believe that religion should be kept out of debates on women’s rights. Within the secular camp, liberal, socialist and radical feminists are working on issues that include reproductive rights, fighting gender based violence, ending discrimination in politics and employment and economic justice.

But there are also Islamic feminists who are directly challenging patriarchal interpretations of gender roles. While they value women’s roles as wives and mothers, they do not believe that women are inferior to men nor do they believe that women should be limited to the private sphere. They use egalitarian interpretations of Islamic teachings to successfully lobby for greater rights for women in marriage and divorce, dress code, employment, political participation and education. They share similarities with religious feminists in the United States who draw on teachings in Christianity, Judaism and Islam to advocate for women’s rights.

There is much potential for women’s rights activists in both regions to build on their commonalities and work together for common goals. Projects like the Harassmap volunteer initiative in Cairo, for instance, brings together Egyptian and Western feminists, women and men, with outreach volunteers to end harassment using a social media and mobile phone reporting system that allows victims to publicly report harassment anonymously. Projects like this one demonstrate a vision for the future – one in which all who struggle for gender equality in both the West and Middle East work together toward a shared goal.

Helen Rizzo is an Associate Professor of Sociology at The American University in Cairo (AUC), and the author of Islam, Democracy and the Status of Women: The Case of Kuwait.

One Response to Feminist Activism in Arab World: Diverse Approaches