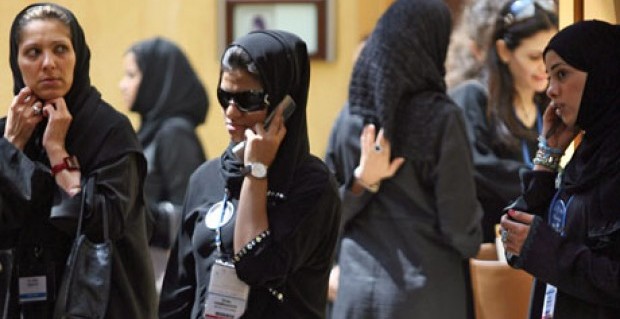 Arab News ran an opinion piece recently by Mohammed Al-Saif which discussed the rise of gynophobia (the fear of women) in Saudi Arabia.  The article highlights Samar Badawi who was a recipient of the International Women of Courage award presented by the U.S. Department of State.  She received her award for recognition of her role as an activist in advocating women’s rights in Saudi Arabia.

Am I the only one who sees it as somewhat ironic that while Saudi men will worship, honor and usually obey their mothers they may have a candid disregard of other women.  Is this in part due to fear?

I remember that one young Saudi guy commented on the blog that he had not seen an uncovered woman other than his mother and sisters since he was 10 years old.  Can you imagine growing up in such an environment?

In many ways it is no wonder that a Saudi man could have a fear of women and want to keep her isolated. If a Saudi man does not have healthy interaction with women it’s no surprise that he may not know how to act, speak or perhaps even behave himself.  Why should the world be surprised that Saudi Arabia has one of the highest divorce rates in the world?

A woman can be the man’s best friend.  She can be his greatest support.  The woman has many talents and skills that should be put to use for the greater benefit of society.

Right now Princess Reema bint Bandar Al-Saud is preparing to lead a group of ten Saudi women to the Mt. Everest base camp.  No group of Saudi men have yet to complete this feat.

I’m glad to hear of more Saudi women standing up and taking action for what they believe in, in spite of any resistance from the male society.  Honestly though, I think that the fear of women will not go away until changes are made at the most basic level in Saudi society starting with primary school students.

One Response to Fear of Women: Endemic in Saudi Society?