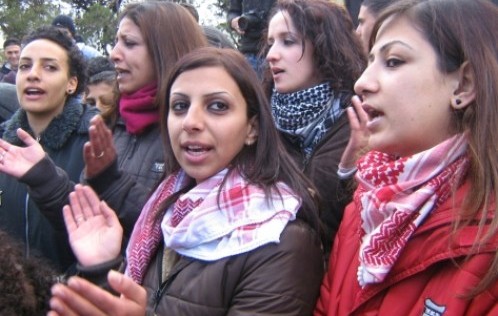 A Facebook page with nearly 2000 members has recently attracted the attention of the Palestinian public and media. “Puzzled young women” is becoming an important arena in the debate on women’s rights in the Palestinian territories, a debate which previously lacked one essential element: dialogue with proponents of a more traditional role for women.

The page is run by a group of young Palestinian women who lobby and fight against injustice towards women and initiate dialogue with those who have differing views. Members use the page to ask legitimate questions about the situation of women within different communities. Topics range from early marriage, to violence against women, the right of inheritance and so-called ‘honour’ killings. Many members claim that the institutions working in this sector have so far accomplished very little in addressing these important issues.

The founders of this Facebook group say their primary concern is the continued injustice against women within the Palestinian territories. They insist that the oppression of women is in direct contradiction with the Palestinian objective of ending Israeli occupation and attaining independence. The founders ask: how can we insist on our freedom as a people when we also insist on limiting the freedoms of certain groups in our society, namely women?

In the heated debate following the murder of Aya Baradiya – a young woman from the southern West Bank who was reportedly killed by her uncle because he did not approve of the man she was in a relationship with – a breakthrough in the long struggle for equal rights was achieved as young women rallied to discuss this atrocity on Facebook. The uproar was heightened by local and international media coverage of this horrible crime, resulting in an amendment of a law that had enabled lenient sentencing for men who kill a female relative. The amendment is significant, even if it is ignored in the Hamas-ruled Gaza strip, which severely restricts women’s liberties and rights in Gaza.

Although changes in legislation are important, social traditions within the Palestinian territories too often stand in the way of progress. As such, education and dialogue are becoming much more crucial in challenging traditions and a conservative culture.

The site’s administrators hold discussions, as well as online dialogue with journalists, religious clerics and key politicians, such as Hanan Ashrawi, the only female member of the Palestinian Liberation Organization Executive Committee. The group also welcomed remarks by the Palestinian television anchor Mohammad Abu Obaid, who criticised women for not putting up a strong enough fight for their rights.

Engaging opposing camps in these discussions broadens the horizon of the debate and allows those involved to tackle issues that concern both sides.

Many opponents of women’s rights argue that some of the rights enjoyed by women in Western countries run counter to Islamic law and culture and that this could lead to social decadence. Some discussions revolve around the Westernisation of Arabic culture and the threat to age-old customs and traditions. They also worry that Western values could lead to severe familial challenges including high divorce rates, children born out of wedlock and the phenomenon of single mothers.

The subject of honour takes up a large share of the discussions. Many women argue that society applies a double standard when dealing with women. While it tolerates men having extra-marital relations, women who do so are considered disgraceful.

Although at times, the discourse — still in an early stage of development — lacks the sophistication found in similar discussion elsewhere, it reflects the profound need to begin to talk about these issues.

Those who manage the “Puzzled young women” page often turn to religious men for support. But they are not the only ones. In a religiously conservative society, women’s associations, such as the Palestinian Violence Against Women Forum, rely on Muslim imams to address violence against women and issues like inheritance rights in their Friday sermon. This is noteworthy because although this trend will not necessarily mobilise religious leaders to join the general struggle for women’s liberation, it does demonstrate that there are resources within the religious community that may be utilised to ease women’s plight.

Compared to some other Arab countries, Palestinian women are considered to fare better. The fact that there are women in influential public positions and women leaders in fields like education, management and politics confirms this idea. However, Palestinian women are still struggling for certain rights that women in Western countries take for granted.

Whatever the future holds for the struggle for Palestinian women’s rights, it is clearly a dynamic and transformative process – with the potential to spill over into politics and other areas of society, helping create a modern, strong and just state.

Nida’ Tuma is a freelance journalist who lives in Ramallah. She holds a B.A. degree in Media from Birzeit University