Epidemic: More Than Half of Saudi Women ‘Overweight’ 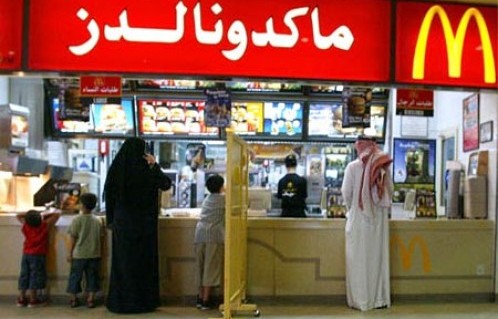 Saudi Gazette reports that 50% of adult Saudi women, between the ages of 30-45, are overweight. Its story notes that both unhealthy diets and lack of exercise are to blame.

‘Unhealthy’ diet doesn’t only mean junk food. The Saudi diet has changed incredibly over the past 50 years, ever since the country became ‘rich’. Foods rich in fats and sugars which had been eaten only a few times per year became daily fare once they could be afforded. Consumption of meat skyrocketed; honey, once the only available sweetener, was supplemented by a vast array of sugars.

During the same period, women of any means ended up with less exercise. Part of that was due to the widespread hiring of maids and other domestic workers to handle all the calorie-burning housework. Another fact, only alluded to in the article, was that women were actively and passively discouraged from undertaking any sort of rigorous exercise. While there are a few health clubs open to women, as the article notes, they are expensive and hard to find. Equally important is that women, starting as school girls, are kept away from athletic activities.

There is only now a realization that sports in school is important to continued physical health. Until very recently, those activities were aggressively banned by religious authorities based on a very peculiar interpretation of the ‘role of women’ in society. The number of athletic team sports for women can be counted on one hand and stand out, when reported, as groundbreaking – and rather strange.

Diabetes, often the result of inactivity and poor diet, is rampant in the Kingdom. Its costs, both monetary and social, are enormous. But that is not the only potential consequence. Poor, overall health, heart disease, and others loom over the generations of women who have been kept sedate, like cage-reared poultry.

The modest flowing abaya makes it less obvious, but the truth is that two-thirds of Saudi women are overweight. Several studies have been conducted regarding this issue, including a survey conducted last year by King Fahd Health City in Riyadh, which declared that half of all Saudi women between 30 to 45 years of age are overweight. But what is the reason behind their rapidly increasing weight? Are the women themselves to be blamed or is it just the unhealthy lifestyle of the Kingdom? A group of young researchers resolved to find out in an extensive study carried out across the Kingdom, in which over 1,000 overweight Saudi women were interviewed. Lack of exercise and excessive consumption of unhealthy food topped the list of factors responsible for the rapidly increasing weight of Saudi women.

“Sitting at home all day with nothing to do and having maids carry out all the household work tends to make one fat,” said a Saudi housewife, a participant in the survey. She complained that there are not enough fitness centers for women in the Kingdom and that the few that do exist are too expensive