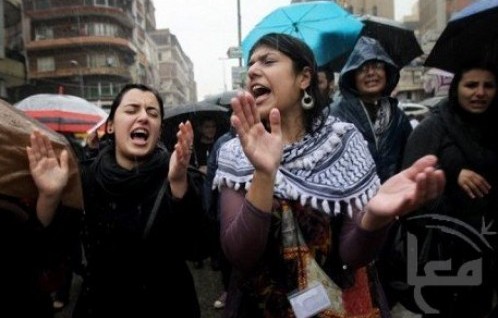 Uprisings espousing principles of democracy, participation and human rights have spread across the Arab world. Arab women have been both on the frontlines and in the background of these struggles –in fact, they have been involved in every nationalist struggle where gender equality might have been a positive result.

When women participate in a nationalist struggle that lacks a feminist agenda, it might be difficult to promote their interests later. Socio-political changes do not guarantee women a seat at the table. Even the positioning of women in leadership and decision-making does not ensure advancements in gender equality for all women.

Lebanon has not been immune to the desire for change. Protests in support of secularism and women’s rights are growing stronger. Just as women and men stood shoulder to shoulder during demonstrations in other countries to call for freedom, dignity and equality, we now have an opportunity to channel the principles of the Arab Spring here in Lebanon.

It is not enough that women stand alone to ask for change. Our Lebanese brothers, fathers and partners must see that the human rights and democratic principles, espoused first at home, will embolden any Arab Spring that comes to Lebanon.

Yet few women’s groups promoting gender equality are working to engage men as supporters, allies and partners. An organisation called ABAAD, which is a resource centre for gender equality, works to create a world where women and men live as equal partners in all aspects of their lives, and where women are empowered to participate in all aspects of their lives. ABAAD is Arabic for “multiple dimensions”.

Some of ABAAD’s key strategies include running support groups for men who have used violence in their spousal and family relationships. These groups aim to change their attitudes and behaviours through education on positive anger and stress management, and peaceful conflict resolution. This affords men a space to express and talk without blame about their masculinity. The aim is also for men to understand the effects of violence on women and families while learning about alternative ways to channel their frustrations.

In addition, ABAAD is engaging young men to help them understand gender in new and less restrictive ways, primarily through art and sports. Sports such as basketball and rugby fortify in participants’ minds the concept of team collaboration and the positive effects of real partnership. The underlying philosophy is that “in partnership against violence, everyone wins.”

ABAAD’s advocacy campaign focuses on reaching out to ordinary men who oppose violence against women. The slogan – “With all my force, against violence” – applies both at home and on the streets.

Viewing men only as perpetrators of inequality does little to advance agendas of democracy and equality. Men can be mobilised in positive ways to address everyday inequalities at home, just as they have done on the streets. Gender equality – and all forms of equality – benefits everyone. Power is not a zero-sum game.

The Arab Spring has shown the world that principles of democracy and human rights are not imported and imposed – they exist right here in our countries and our lives. ABAAD continues to expand the dimensions of gender equality, across the region, to ensure that the voices of those speaking in favour of democracy and human rights carry into our homes. Lebanon might not yet feel the full effect of an Arab Spring, but we can start by embracing these principles at home.

In Lebanon and across the region, a peaceful revolution for equality on the streets and in our homes is just beginning.

Ghida Anani is Founder and Director of ABAAD, a resource centre for gender equality. Lina Abi Rafeh is a gender-based violence expert.