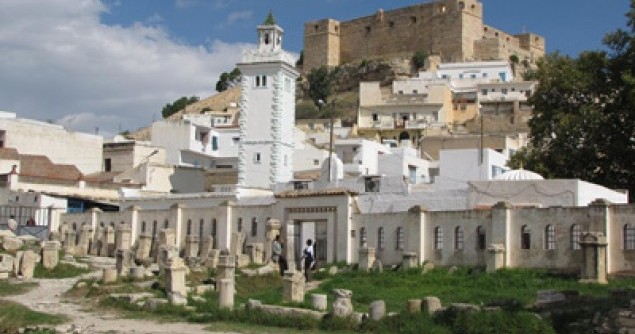 The Tunisian city where I took my first steps is called El Kef. My first dreams and earliest ambitions were born in this city.

Yet when most Tunisians hear the name El Kef, certain stereotypes come to mind that have been long held by a majority of Tunisians: harsh winter weather, and economic and social insecurity due to the vast size of the region, most of which is composed of small, isolated villages.

Located in the northwest of Tunisia, El Kef is renowned for its rich Roman and Numidian (an ancient Berber kingdom) history. But what distinguishes El Kef above all is theatre, which has created a window to the world for the city.

In El Kef, it is through theatre that different cultures come together and openness toward the other is alive and well.

The openness expressed by El Kef’s theatre is also present in the composition of the city. The city centre, constructed centuries ago, contains a church, a cathedral and a mosque within the same 5km space. This demonstrates that the tolerance of Tunisians, and the residents of El Kef, dates back centuries. There is a legacy of openness to all visitors, shared across generations. It is this spirit that is expressed in its theatre.

The greatest names in Tunisia’s theatre and music scene come from El Kef. They include actors such as Ahmed Snoussi; comedian and film actor Lamine Nahdi, who received the prize for best actor in the Carthage Film Festival; and the singer Choubaila Rached, whose musical works have enriched the repertoire of the Tunisian contemporary music.

In the 1970s Moncef Souissi founded El Kef’s theatre troupe, an alternative group that reflected the social, economic and political realities of the era. This focus on current issues, instead of history, was new for Tunisia. Soon they were able to challenge Ali Ben Ayed’s famous classical theatre troupe in Tunis and create an alternative school of theatre.

In honour of World Theatre Day, 27 March, El Kef organised an event known as “24-Hour Nonstop Theatre.” This event, launched in 2001 by the artist Lasaad Ben Abdallah, is a mélange where everything is welcome. The last event brought together 22 plays, six musical acts and a street performance, as well as an art workshop.

Performances take place in various sites: the centre for dramatic arts, the basilica, the Church of Saint Peter, the cultural centre, and even the sports hall where the national circus school presented one of its productions, “The Beautiful Harvest” in 2006.

Every year, troupes from foreign countries are invited to participate in this event. In the past, troupes from Italy, France, the Netherlands, Morocco, Lebanon, Syria and Sweden have participated, opening the city to the world. Guests from foreign countries are invited to discover the warm and welcoming city that is El Kef and to foster cultural awareness.

Today, El Kef continues to welcome the young artists who aspire to make a difference by changing the face of Tunisian theatre and bringing it to the world. “24-Hour Nonstop Theatre” has become an artistic and cultural success, but more than that, the event has influenced the city itself, bringing visitors from all over the world and creating a space where different cultures come together and enrich the city.

Amina Benkhlifa, is 22 years-old and a native of El Kef, Tunisia. She studied international commerce but has always been passionate about art, and theatre in particular