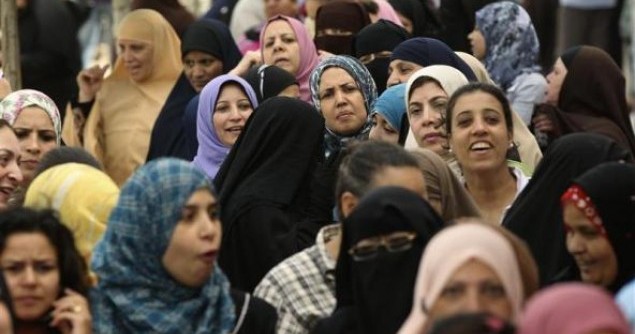 One of the iconic images of Egypt’s revolution was that of men and women standing together, united for positive change. But since then, women have struggled with sexual harassment and been side-lined in the political transition. Egyptian women, however, have never stopped fighting – and today they are finding many new allies.

Some Egyptians argue that democracy needs to come first, before worrying about women’s rights. Overcoming women’s marginalisation first, though, is actually essential to creating a truly democratic Egypt. The core issue is not only about women’s equality with men, but also about justice.

All too often, women have been treated as second class citizens and subject to injustice – they face harassment on the street, have been victims of virginity tests by the military, and are shut out of many opportunities to be involved in politics. For instance, women’s rights activists are not being consulted in the constitution drafting process. Even though women can legally hold positions as judges or high-ranking political offices, social pressure often means women are unable to attain them.

However, women’s rights activists have not been silent in the face of hurdles like these. Take Bothaina Kamel, who exercised her right to run for president, and was Egypt’s first female candidate for the office. Although she ultimately failed to gather enough signatures to be on the ballot, she demonstrated to other Egyptian women that they, too, should be able to participate in politics.

Alongside these examples of female activists are also stories of men supporting women. Many liberal members of parliament, such as Amr Hamzawy, have spoken about the importance of making women’s issues a priority. Men’s support has extended to the grassroots level, too. Over the past year, men have participated in and protected women from harassment during marches organised by women. In addition, projects like Harassmap, which documents and advocates against harassment on the street, and other organisations like it, have male volunteers.

The only way to truly achieve women’s rights over the long-term is to include women in all decision-making processes – including revising the constitution. Egypt’s new constitution must call for the elimination of any form of gender-based discrimination. It should include measures that will encourage women to participate in government and hold leadership positions and protect their socio-economic rights, such as the right to education. Last year, in fact, various feminist groups working with the UN drafted the Egyptian Women’s Charter, which could serve as a model for a more gender-sensitive constitution.

Moreover, women’s rights activists must engage the state – and participate in both the political opposition and in Mohamed Morsi’s new government. One step the state could take to promote women’s rights would be to sponsor projects by various women’s organisations, and include women from these groups in the new cabinet currently in formation. In the French government, Najat Vallaud-Belkacem serves as the Minister for Women’s Rights – a position that may be worth replicating in Egypt.

Women’s rights activists from all backgrounds need to maintain a united front and actively participate in Egypt’s political transition. In a personal interview, Abdel Moneim stressed the need for women within the Muslim Brotherhood to work towards reforming Egypt’s political and social spheres, alongside women outside the movement. It is partnerships like these that are ultimately needed – activists from all perspectives, religious and secular, joining to face the challenges ahead.

Randa El Tahawy is a writer for Egypt Today and a women’s rights activist in Egypt.