Egypt Protests: So, Who’s Got The Plan Then? 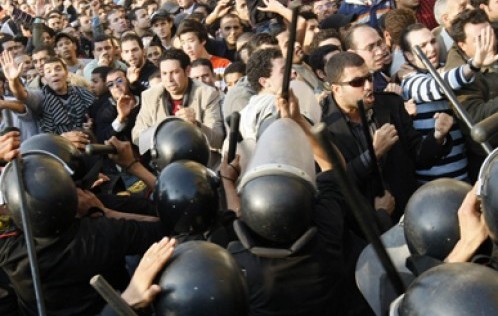 Crowds are continuing to gather as night falls on the sixth day of protests. Tuesday’s “million man march” was an impressive display of determination and courage in the face of arbitrary violence from Central Security Forces (CSF). So far at least 38 people have been killed and 1,700 wounded. After a ceasefire was agreed early on Wednesday CSF have just forcibly retaken control of Mohammed Mahmoud Street and Falakky Square, resulting in further casualties.

There are rumours of a split between SCAF and CSF, the former trying to halt the bloodshed, and the latter trying to regain control of the streets by any means necessary. Nevertheless, protester anger remains directed towards SCAF, who they perceive as perverters of their revolution; guardians turned oppressors.

Numbers grew from around 20,000 overnight on Monday to around 100,000 by 19:00 local time on Tuesday (17:00 GMT). The mood in the square is fanatical and united. Despite Tuesday’s announcement that the military had decided to accept the cabinet’s resignation, committed to hold presidential elections by July 2012, and agreed to release all those arrested since Friday, the crowd will not be placated; they are demanding that Field Marshall Tantawi and the whole of SCAF step down immediately.

In recent months SCAF have lost all credibility by dragging their feet on reforms, committing human rights abuses, and by the horrific crackdown outside the Maspero building on October 9th. The crowd demand that they cede power to a civilian government.

Last night Tantawi gave a speech which incentivised protesters, asserting that SCAF had the best interests of the country at heart, and were “insulted” by the criticisms of the protesters. He did, however, agree to hold a referendum on whether or not SCAF will remain in power, a proposal greeted with scorn by those assembled in the square.

If SCAF are forced to step down, by referendum, or by a less formal expression of popular will, no roadmap has been provided for how Egypt is to be governed in their absence. Their stepping aside could also cause elections to be delayed, setting back the process of forming a government chosen by the popular democratic will.

While numbers in Tahrir are big, they have not yet reached the proportions of the occupation of January and February. Furthermore, to a certain extent the violence of the current demonstrations works in SCAF’s favour. While for many it is undermining their credibility, for many more it is making them so fearful for their own security that they are afraid of the chaos a power vacuum would cause.

At the present moment it’s hard to see a way forward for Egypt. SCAF do not appear to have a plan for how to deal with the situation, yet neither do the protesters have a plan for after the handover of power.

The turmoil that currently reigns has mostly been contained in Downtown Cairo, and a few trouble spots in Alexandria and elsewhere, but at the current rate of escalation it may not be long before the country is once more engulfed by revolution.