Education is key to creating ‘culture of peace’ in Egypt 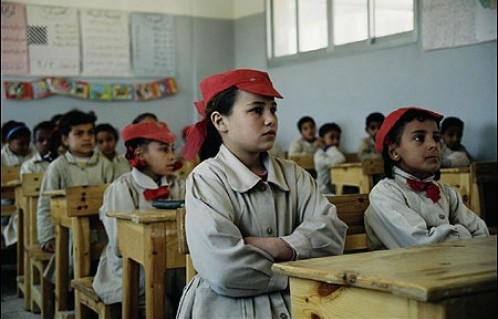 Instead of falling victim to Egypt’s eye-for-an-eye past, a concerted effort to create a culture of peace in what has quickly become a starkly fractured political scene – between religious groups, the military and activists, and activists and the people – may well be the best opportunity to bring about a new Egypt with social justice, transparency and tolerance.

Egyptians are striving daily to show the world that societies can change. Cairo is not the same city it was six months ago. As voices now begin to breech the political and social stalemate in the country, Egyptian society can, through a culture of peace, set a precedent not only for their own country but for the whole region.

UNESCO defines the culture of peace as “a set of values, attitudes, modes of behaviour and ways of life that reject violence and prevent conflicts by tackling their root causes to solve problems through dialogue”. In Egypt, for example, this could help develop an overall sense that the “other”, who participated in violent acts in the past, can become part of society, instead of remaining on the outskirts as they are currently. Building such a culture in Egypt would follow the South African model of reconciliation, which allowed the country to look forward instead of focusing on the frustrating and sad past of apartheid.

Instilling a culture of peace in the younger generation could be a great antidote to the older generations’ mistrust and antagonism toward one another – Christian versus Muslim; Worker versus Owner; Military versus the People; and so on.

In Egypt, one of the root causes of a lack of a culture of peace is the educational system. Young Egyptian students are taught that they are different from one another, that their respective faiths are cause for separation. In schools, Christian students study the history and faith of Christianity separately, while Muslim students do the same for Islam. This creates a sense that each group is separate and divided when it comes to any national cause. Without jointly learning the country’s history of Christianity and Islam, this helps build an idea that Egypt was, and is, “Christian” or “Muslim”.

A few years ago, I met a history teacher from a local secondary school in Cairo. She wanted to invest an entire week of the curriculum in discussing Judaism and Christianity, and their role in Egyptian history. The headmaster of the school told her she was not allowed to do so.

“They told me that Egypt is a Muslim country and the government has given students the opportunity to learn about Christianity if they are Christian,” the teacher said. She was frustrated. Students had been making slurs against their peers on a regular basis and she thought that a little education into the cultures that make up Egypt – such as Coptic history, the early years of Islam and the integration that subsequently came about – would go a long way. But that was not the way the government looked at this issue. Here, the headmaster of the private school refused to accept her proposal. For public schools, there is no debate – the government has simply not allowed integrated religious education.

This imposed division was broken down by the revolution, at least for a few months. But through a concerted effort by educators and peace advocates, Egyptian society can be transformed into one where a culture of peace and coexistence prevails, which can help implement the notions of tolerance and understanding through what UNESCO says is “dialogue, consensus-building and active non-violence”.

As Egypt pushes on in a new direction, now is the time to create a society that understands all facets of its history and its people. Through a greater push toward a culture of peace, Egypt can once more show the world that it is a country that is forward-thinking and can create a better world based on peace and tolerance.

Joseph Mayton is Editor-in-Chief of Bikyamasr.com