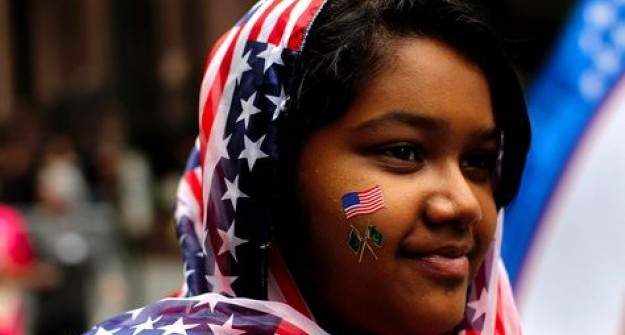 In today’s globally connected world, there is a great need to establish cooperative relationships and promote a shared sense of humanity. The United States can lead in this effort by supporting a growing segment of its own population – young Muslim Americans. What role this upcoming generation plays in the future is something every American should consider.

There are over seven million Muslims in the United States, forty per cent of whom are between the ages of 18 and 29. Initiatives to increase their ability to obtain higher education and to help effectively engage them in public life will not only serve America’s citizens and its local communities, but will also help the United States build positive relationships with other countries.

Although many young Muslim Americans are already pursuing college and graduate studies, a large portion of this population is unable to complete their degrees due to the rapidly increasing cost of higher education. In addition, there are small but significant interest rates on most education loans. Loans bearing interest are generally prohibited under Islamic finance principles, and serve as an additional obstacle to Muslim students seeking ways to fund their education.

To tackle this problem, a group of Muslim American entrepreneurs, philanthropists, local community leaders, lawyers and doctors – individuals committed to higher education and to giving back – started a number of scholarship and civic engagement organisations to promote higher education and public service amongst Muslim Americans. Organisations like Dollar-A-Day Scholarship Fund (DAD), the Islamic Scholarship Fund, and The Fadel Educational Foundation award scholarships to students pursuing college and graduate degrees related to the liberal arts and social sciences.

DAD, for example, is a grassroots initiative that encourages donors to come together and each contribute just one dollar a day. The goal is to share the responsibility to help advance the ideals of scholarship, leadership and public service amongst Muslim Americans. Every year, DAD raises thousands of dollars which it awards to students through academic scholarships. Students apply for these scholarships on a yearly basis and are selected based on a combination of factors including financial need, area of study, level of community service and future aspirations to become agents of positive change.

DAD’s founders strongly believe that no student should forego higher education because of financial limitations, especially if their studies are in fields that promote civic involvement and community development. DAD also implements other programmes, including an internship stipend fund, which supports students pursuing internship opportunities locally and in developing countries. This is invaluable to their educational experience in our global environment. Additionally, DAD is seeking to develop a no-interest loan programme for higher education, which would build upon Islamic finance principles to serve as a helpful alternative to interest-bearing educational loans.

In a country such as the United States, where students can study at world-class academic institutions, we are especially well-positioned to support such causes. The Western world takes great interest in working with Muslim-majority countries. And in our small 21st century, globally-knit world, educated young Muslim Americans will play a pivotal role as ambassadors of the United States, building relationships with other Muslims around the world, and showcasing America’s true commitment to ingenuity, innovation, governance, scholarship, leadership and public service.

M. Salman Ravala is an attorney and Founder of Dollar-A-Day Scholarship Fund, Inc. He can be contacted at [email protected]