Dull and Predictable: The Real Taste of Dubai 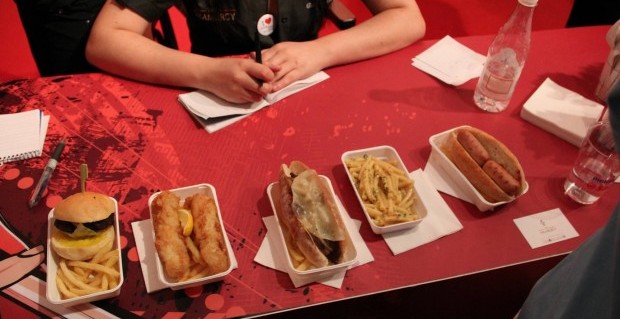 Last weekend was my second experience with Taste of Dubai.

If the festival was an accurate representation of the taste of Dubai, the stalls would have been a mix of Lebanese grills and dips, puffy khubz direct from the flame, devilishly hot Pakistani curry, rows upon rows of crisping drippy chicken and mutton for shawarma, the occasional dhosa with sweet spicy chutney, and of course, the treats – baklava and cupcakes (what the fascination with cupcakes is here, I really can’t understand), and polystyrene cups of steaming hot sweet tea made with evaporated milk. The air would have been ripe with garlic, fat, cardamom, rosewater, coconut, coriander and cumin, all topped off in a fine mist of icing sugar.

The stalls would have been selling portions at 5AED. The queues would have been two deep and fifty wide. The entry price would have been 30AED, but many would just push through the gates and get in for free. An ’80s Philipino cover band would have been blaring out inappropriate songs. Stalls would have been haphazard, scattered like freckles on a red-head, more than half of them unlicensed. There would probably be a gas barbecue in a corner somewhere that would inevitably blow up. Then everyone would stand around watching and arguing, nibbling paratha and blaming anybody else, all the while blocking the paramedics. By the time it was finished, there would be a traffic jam in the carpark, and be fifteen thousand people stranded somewhere in the desert, with three taxis to shuttle them back to town.

The next day someone would write to 7days about it, and what a cacophonous stuff-up it was, and half the expats in Dubai would tweet in agreement.

But it’s not like that at all. “Taste” festivals are franchises that operate all over the world, and so the finished product is an amalgam of the taste of the city concerned, and what the organisors deem it should taste like. In all, it’s always quite… ahem… tasteful.

It was, like last year, in a well located area, at the Media City Amphitheatre – a large grassy knoll surrounded by good four-star hotels, taxi ranks and nearby to the metro. As in 2011 the entry was well policed and organised, tickets were remarkably easy to purchase, and nobody got in for free (except me, because I write a blog about food). Inside were plenty of toilets, an ATM, and rows of marquees delivering four dishes from each of Dubai’s best restaurants at prices between 15 and 40AED. Again there was the theatre for cooking presentations that actually had enough seats for the crowd, and a cooking school with a not unbearable queue signing up for free classes. In a secluded corner, they tucked away the drunks and the screaming children in the beverage theatre and kids play zone (I’ll let you guess who went where).

Pretty much exactly the same as last year. The same restaurants showed in the main. Many also had the same menus as last year. I suppose this is just as well, considering one could never try all four from each outlet in one festival and get home alive and well. So I could skip the white tomato soup from Rhodes Mezzanine, the dynamite prawns from PF Changs, or the fish and chips with mushy peas from Rivington Grill. Instead I sampled from the newer openings – crab and green papaya (lacking sweetness and tang) from the Siddhartha Lounge, Stracciatella cheese from Armani Peck (a bland mozzerella soup), from ToroToro some tasty dense and crispy yuca fries with “mojo” (whatever that is – it’s good) and a heavenly Dulce de Leche cheesecake from Gaucho

Good to see this year were some smaller producers – Spontanious Euphoria cookies, Bloomsbury cakes, Raw coffee and Yummy Tummy. Also a great surprise was the last minute appearance of Table 9, who apparently managed to wrap it all together and fill a stand-in spot with just 48 hours to blast-off. There was a string of celebrity chefs – some from last year, some not. Some with a Dubai presence, and some not so much (why they are included in a “taste of Dubai” festival, I’m not sure, but it’s nice to see the likes of Aldo Zilli and Atul Kochhar regardless). As I stumbled from marquee to lounge to other marquee and other lounge, I invariably met other fooderati. One had cooked under the watchful eye of Giorgio Locatelli, another had just interviewed Gary Rhodes, and one had got her Nobu cook book signed by the lovely man himself. The food groupie success stories were rife.

But it wasn’t all good. The MMI beverage theatre disappointed this year – it was hidden, too casual, too quiet when the serious stuff was going on, and converted to a rowdy beer garden when the seminars were over. In typical Dubai form, the ATM had a conniption at the pointy end of the day and refused to dispense any more funds, leaving those without financial foresight to go hungry. Another let-down was the VIP lounge, which seemed to have nothing in particular extra than the main arena, and a security guard on the gate who was completely uninterested in checking passes (I walked in twice without a pass). But the greatest disappointment was that there was not really anything significantly new this year as compared to 2011. Not that I could see, anyway.

And that, to be honest, is actually a fairly typical taste of Dubai.

A fellow blogging friend asked me earlier this year if I could give her a glimpse of my crystal ball for Dubai 2012 tastes.  I sent her about a thousand words telling her why that was the wrong question to ask. In a nutshell, I think Dubai is too new, too small, too diverse  and too busy following others to have original trends. And Taste of Dubai is an example of this – the formula is staid and predictable, copied from other markets, almost entirely unoriginal.

Half the restaurants featured are not unique to Dubai. I could find no primary producers from the UAE, and no Emirati restaurant represented. A great shame, as I truly believed that this year would see a rise in the awareness of the great local produce and historic cuisine. Shows how effective my crystal ball is. Dubai has, as usual, either forgotten or pushed aside its squishy innards, and instead given us a safe and easy “taste of the-rest-of-the-world”.

Mind you, I’m very glad there were no gas explosions.

7 Responses to Dull and Predictable: The Real Taste of Dubai