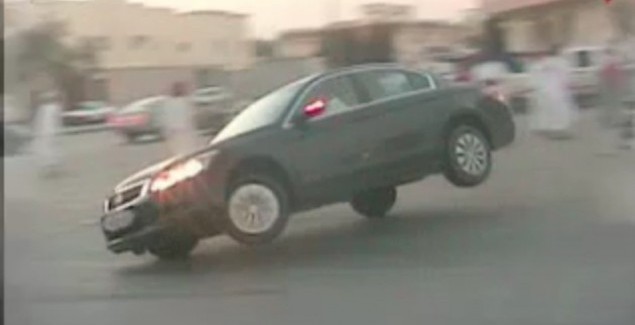 Drifting in Saudi Arabia can be another word for “Insha’allah” (God willing) in action…at least in my point of view.  Drifting is when a driver puts himself and all of those around him at high risk of serious injury or death.  Yet, drifting is part of a cult culture in Saudi Arabia.  Young men and boys across the Kingdom feel they need to “pass the rites” of drifting in order to be “cool.”

Drifting refers to when a driver of a vehicle, whether 2, 3 or 4 wheeled, drives the vehicle at an angle zig-zagging across the street while only using half the tires and maintain control.  In other words, a young Saudi guy in his car may quickly accelerate while making sharp left and right turns of the wheel.  This in turn will allow the vehicle to rise up while moving on its side with only one front wheel and one rear wheel still on the ground.

The Saudi guys will drift in the center of any of Saudi’s cities or in the desert.  It does not matter to them if the area in which they decided to drift has other drivers in vehicles or pedestrians in the vicinity.

They drift for the sport, the adventure and for what they perceive as the prestige.  They believe that by drifting they are making themselves attractive and interesting to young women.

According to Silvio Saadi, a Jeddah-based businessman, speaking to Media Line, “Saudis often try to drift with normal cars and thousands of spectators on the sides of the street,” he said, referring to an informal motor sport in which drivers intentionally over-steer so as to lose traction and drift on the road. “Sometimes the car drifts into the spectators, slamming them into buildings along the sidewalk.”

This video illustrates exactly what I am talking about…