Do Books Matter in Contemporary Cairo? 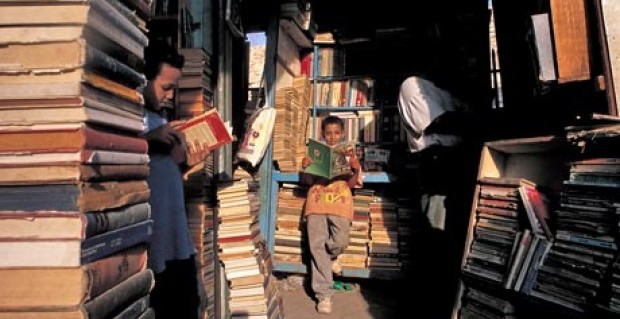 Soor el-Azbakeya (The Azbakeya Fence) is Cairo’s oldest book market. The market played an important role in Egypt’s cultural and intellectual life for roughly hundred years, from the late 1800s to the late 1900s. But, since 1990, the booksellers have been juggled around four times. Now, they’re on the verge of a fifth eviction.

It was reportedly the 1850s and the 1860s when Mamluk-era buildings were demolished to make way for the Paris-inspired Azbakeya gardens area, around which cafes and theaters sprang up. The ruling classes gathered there, and booksellers followed, collecting around the Soor el-Azbakeya.

Al Ahram quotes Leslie Lababidi’s Cairo Street Stories as saying that, in the 1920s, booksellers stretched out their books along the Azbakeya fence, but were often chased away with water hoses. According to the local booksellers, the Soor al-Azbakeya was nonetheless frequented by literary figures like Tawfiq al-Hakim and Naguib Mahfouz.

Bookseller Mohamed Ahmed told Al Ahram in 1998: “Book vendors used to roam the streets downtown and then get some rest at the Azbakiya fence. Police would chase them down in the days of King Farouk. It was only after the 1952 Revolution that vendors were given permits to sell books at the fence.”

In 1971, the Khedival Opera House burned down, but the booksellers hung on until the early 1990s, when they were evicted to make way for the city’s first metro line. For six long years, the market was in “a desolate area at the foot of the Moqattam Hills,” according to Al Ahram Weekly.

When in 1998, they were moved back to Azbakeya, “Many people wore broad smiles,” the Ahram Weekly reported. “Why not? The garden’s fence was once again to serve as the site of Cairo’s most famous second-hand book market.”

At the time of its move back to the Azbakeya fence, novelist Gamal al-Ghitani told the Weekly: “Azbakiya has greatly affected my career. More than half of the books in my library are from here. As a young man, I used to save money and go to the second-hand book market every evening to browse for valuable books.

“Even now, browsing through the old, rare books of Azbakiya is a special treat for me. I was one of those who fought for the return of the vendors to their original site. This was only an expression of gratitude for them.”

But more metro lines were built, and the booksellers were moved twice more, most recently in 2009. Over the years, the Azbakeya booksellers also came to depend heavily on the trade they did each January at the Cairo International Book Fair.

The 2011 fair was canceled and the 2012 fair saw considerably fewer patrons. Now, the nearby Emad al-Islam service complex wants to expand its factory, school, and clinic into the market area where the Azbekeya booksellers currently reside.

Vendors told Ahram Online and the Egypt Independent that they’re not averse to moving, but that they’d like a decent location with some aesthetic value where they could stay awhile.

Bookseller Alaa Abdel Haq told the Egypt Independent: “People come to visit us from all over the world looking for our old and rare books, hoping that they will find a great place where Arabic literature pioneers were raised, but they come to find the wall surrounded by street vendors and piles of rubbish.”

But do the Azbekya booksellers now matter just as a historical site, as a place for internal and external tourists? Or can they — in the right location, with the right twist — still remain a vibrant part of the city’s literary landscape?

One Response to Do Books Matter in Contemporary Cairo?