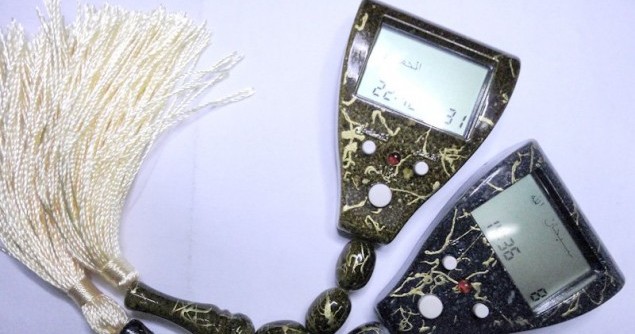 Whoever says Subhan Allah wa bi Hamdihi (Glory be to Allah and Praise Him) 100 times during the day, his sins are wiped away, even if they are like the foam of the sea. [Sahih Bukhari; #7:168]

Working in an eclectic boutique for the past year, I usually get a view of the trends and fashions to come at least six months in advance. And if I miss something, the ladies who visit the boutique are either wearing it or know about it.

One accessory I seem to have missed, however, is the tasbeeh ring. I noticed it on most of the Gulf ladies coming into the shop over the Eid al-Adha holidays. They were pink, blue and green. Some were plain, others encrusted with diamonds…

Prayer beads are widely used in various religions — Hinduism, Buddhism, Roman Catholicism, Orthodox Christianity, Anglicanism, Islam, Sikhism and the Baha’i Faith — to count the repetitions of prayers, chants or devotions, such as the Rosary of Virgin Mary in Christianity and dhikr (remembrance of God) in Islam.I didn’t know what it was. After seeing a few, I had to ask a sheikha… And what a great idea! The prayer ring has replaced the prayer beads, and it is not something new. While reading about the rings and prayer beads in general, I found that Rosary rings were given to some Catholic nuns at the time of their solemn profession.

Writing about prayer beads reminded me of a family visit to the Vatican under Blessed John XXIII in the early sixties. We were fortunate to attend an audience with the Pope and I had a treasured Rosary, bought at the Vatican souvenir shop, blessed by the Holy Father.

The number of beads varies by religion or use.

Prayer beads are fingered in an automatic manner and allow the user to keep track of how many prayers have been said with a minimal amount of conscious effort, which in turn allows greater attention to be devoted to the prayers themselves. And that’s where the ring comes in. You click after each prayer and can keep track.Prayer beads, Masbaha or Tasbeeh in Islam, usually have either 99 or 33 beads. Buddhists and Hindus use the Japa Mala, most commonly with 108 beads — or 27, which are counted four times. Baha’i prayer beads consist of either 95 or 19 strung with the addition of five beads below. Roman Catholics use the Rosary with 54 beads and an additional five, whereas Eastern Orthodox Christians use a knotted Rosary with 100 knots, although prayer ropes with 50 or 33 knots can also be used.

There are three widely accepted uses for prayer beads: Repetition of the same devotion; repetition of several different prayers in some pattern, interspersed with or accompanied by meditations; and meditation on a series of spiritual themes, as in Catholicism or Islam.

In Islam, the Masbaha or Tasbeeh have 99 beads, corresponding to the 99 Names of Allah. Sometimes only 33 beads are used, in which case one would cycle through them three times to equal 99.

The beads are traditionally used to keep count while saying the prayer known as Tasbeeh of Fatima, which was a form of prayer offered as a gift by the Prophet Muhammad (PBUH) to his daughter Fatima.

Tasbeeh Fatima is recited as follows: 33 times Subhan Allah (Glory be to God), 33 times Al Hamdulillah (Praise be to God), and 33 times Allahu Akbar (God is the greatest). It is highly recommended to recite this prayer after the daily five ritual prayers.

The tradition of Tasbeeh Fatima, narrated by Abu Huraira, goes like this: Some poor people came to the Prophet and said, “The wealthy people will get higher grades and will have permanent enjoyment and they pray like us and fast as we do. They have more money by which they perform the Hajj, and Umra; fight and struggle in Allah’s Cause and give in charity.” The Prophet said, “Shall I not tell you a thing upon which if you acted you would catch up with those who have surpassed you? Nobody would overtake you and you would be better than the people amongst whom you live except those who would do the same. Say Subhan Allah, Al Hamdulillah and Allahu Akbar 33 times each after every (compulsory) prayer.”

The Christian Rosary ring, although not digital, has 10 indentations and a cross representing one decade of aRosary. Smaller ring rosaries became known as soldiers’ rosaries, because they often took them into battle, most notably during World War I.

“Rosary” is used to describe both a sequence of prayers and a string of prayer beads used to count the prayers. The sequence of prayers in the Rosary is the Lord’s Prayer, the Hail Mary 10 times, and the Glory Be to the Father, sometimes followed by the Fatima Prayer (“O My Jesus, Forgive us our sins. Save us from the fires of hell. Lead all souls to Heaven, especially those most in need of Thy mercy”). Each sequence is known as a decade. The praying of each decade is accompanied by meditation on one of the Mysteries of the Rosary, which recall the life of Jesus Christ.