Dictatorship: The Ultimate ‘Boys Only’ Club 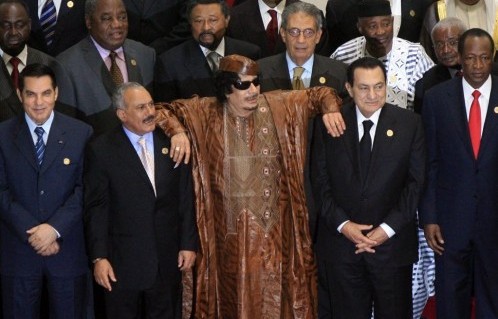 Colonel Muammar Qaddafi, Hosni Mubarak and Zine el Abidine Ben Ali – they’ve all been dominating the headlines over the past few weeks. They’ve a lot in common. They’ve presided over their countries with all sorts of clichés: ruling with an “iron fist”, failing to see the “writing on the wall” for their regimes and not listening to the “voice of the people”.

They also have one specific genetic factor in common: this career is for men only.

Although I support gender equality in all walks of life, this is one area where I wouldn’t be in a hurry to see women taking a more equal role. Female dictators are a rare breed. And I’m quite happy for feminism and dictatorship to continue being unlikely bedfellows, thank you very much.

There are a few that have come close. Indira Gandhi ruled under emergency law, claiming it after widespread communal riots in India and effectively having quasi-dictatorial powers for a few years. Jiang Qing exercised a great deal of power in China as the health of her husband, Mao Zedong, declined, so much so that she was tried along with the Gang of Four. Romania’s Elena Ceaucescu was executed along with her dictator husband for her contribution to his house of horrors. And Imelda Marcos? Now a member of Congress, she is remembered more for her excesses in taste while husband Ferdinand ruled the Philippines.

By and large, the women practiced a twisted form of marital companionship, supporting and goading on a husband in his ruthlessness.

There are some obvious reasons for so few female dictators. Dictators often achieve power by working their way through the military and then staging a coup. Until recently, women were almost absent from the armed forces. And, in countries where dictatorial power flourishes, all people generally – but women in particular – have precious little themselves.

Some people say women are inherently selfless and just don’t want to oppress others. It’s the “women are nicer human beings” argument. Others reckon we have better things to do. Personally, I like to spend time with family, enjoy good food and, if I have some time left, maybe squeeze in a manicure or facial.

I just don’t have the time and effort to brutally suppress, torture and massacre people consistently over time with the kind of obsessive focus and dedication you need to achieve dictator status. I mean, if you’re going to do it, you don’t want to be the dictator that time forgot. You want to go down in history as a cat-stroking, out-of-his-mind madman and badman.

The last week has seen plenty of madness, badness, horror and tragedy. The brutal consequences of dictatorship are not to be mocked or satirised. They are not part of the war on sexism or the humour that makes us laugh at the gender gap.

Instead, in the countries where courage has filled the bellies of its people, both men and women have taken what power they do have to ensure they have a hand in bringing the dictatorship to an end.

But it is the participation of the women that has been incredible over the past few weeks and has made me feel so proud. Heads held high, fists in the air, they have played an active part in bringing down those who have oppressed them.

Dictators beware: however you got to power, whatever your gender, your time is over. Step aside.

One Response to Dictatorship: The Ultimate ‘Boys Only’ Club