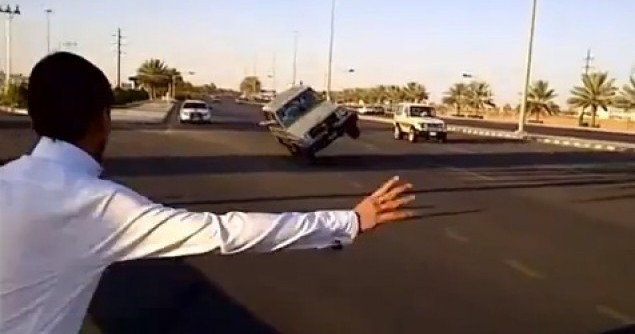 Saudi Gazette runs a piece that originated in the Arabic daily Al-Riyadh calling for a government crackdown on stunt driving in Saudi Arabia. The writer notes that stunt driving has been a fixture in the Kingdom for over 30 years – this must include dune bashing.

What has changed is that the stunt drivers are younger and less cautious, pulling off their stunts on city streets. The cars used are frequently stolen and the thrill of it all is used to entice minors into taking part. The death penalty handed out to ‘Abo-Kab’ and later reduced to 20 years in jail, lashing, and a lifetime ban on driving, appears not to have been an adequate warning. A case decided last month, which also led to a death penalty, might be more persuasive, if not also reduced.

It further seems that the world believes this form of driving to be legal in the Kingdom, and a matter which concerned authorities do not try to crack down on. However, these drivers cannot continue unchecked unless the community is indifferent to the dangers this form of driving poses to other drivers and the safety of others. Yet, stunt driving in the Kingdom has been going on for nearly 30 years.

In many ways, stunt driving has developed to become a part of youth culture. It can lead to a wide range of crimes, as youth are tempted to steal cars and lure minors into joy riding – a deadly game – which can cost many lives. Nevertheless, these joy riders have become heroes for some youth, despite their costing lives and terrorizing innocent people.