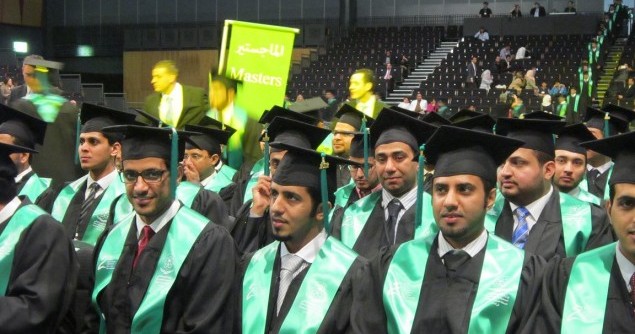 As a curriculum designer of English language learning (as opposed to training), I have been always vexed by the way Saudi Arabian schools endeavor to teach English and its many sub-skills as a scientific instruction, which if followed correctly, can make any student function in an English language environment. Recently all the members of the English language department at the University I worked for were required to take an American proficiency test for college level English language instructors. The focus of the test was on reading comprehension and writing with grammar related to popular contextual usage. When the smoke cleared, most of the faculty had failed so spectacularly that management actively encouraged everyone to retake the test with talks about plans of bringing people in to do workshops in order to improve skill levels. They consoled everyone by saying it was the hardest assessment they could find (apparently thinking most of the seasoned instructors were up to the challenge).

One of my friends, a highly competent bilingual instructor in the program, was so demoralized by his results, he decided to come to me for a native’s speak assessment of the test. Since we were working in the same program, I also had to take the test. I told him I had found the test difficult.

“What did you get?” he asked; seemly looking for company through what he thought was a job threatening situation. I told him I had passed. When pressed I finally gave up my score; which was four times his. He had bachelors in Linguistics and a CELTA. He spoke English almost like a native with a slight accent. I nick-named him ‘Scar Face’ because his cut hair was like Al Pachino’s in the movie of the same name.

“They gave you the wrong test”, I quickly added. “How could they expect you the pass a test intended for university ranked English teachers in America? You’re not doing that kind of teaching.”

“What books can I read to improve my score? I’m going to start reading the dictionary—and get that book you were talking about…a thesaurus– and read that too,” he said with jugernaut determination.

“Forget reading the dictionary,” I told him. “You can’t just focus on the language elements and expect to be an expert in the skills. College level English speakers are weaned on English literature and translations of some classics from other languages. The best are given a liberal arts Education which includes philosophy, history, literature and the sciences. What we are doing here is just to give students the ability to do customer service or hold their own during a business negotiation. The reason why you failed is because you didn’t know enough about the context of which the western world exists and evolves.” He knodded agreeably but I don’t think he understood what I was saying.

In his essay Critical Thinking Pedagogy, Phillip Holden of the Centre of Development of Teaching and Learning in Singapore writes:

My own experience is that students often come to us from “A” levels without close-reading skills, and also with a non-theoretical understanding of the text which gives pride of place to unexamined “common sense”—received assumptions–about the way the world is. Encouraging critical thinking thus first involves teaching students close reading skills through practice, allowing students to realize that there are frequently contradictions in texts, and that reading a text involves asking a number of questions, rather than moving too quickly to a solution.

In the late twentieth century, the influence of Philosophy, Political Science, Anthropology, and Sociology has led to the rise of what is sometimes, misleadingly perhaps, called “literary theory.” The definition of a literary text has broadened to television serials, films, and other media, although much focus is still given to writings in more traditional media. In general, theoretical approaches will examine literary texts—and by extension all texts–as in some way structuring our perceptions of reality.

Critical reading thus involves a student paying close attention to formal features of the text—elements that American critics René Wellek and Austin Warren once called the “intrinsic elements” of the texts, and relating these to extrinsic elements, the manner in which the text relates to a larger world.

As literary study develops, critical thinking is shown by a student’s ability to use various conceptual frameworks to read texts, but also to realize how the nature of the texts questions the frameworks, and indeed the “common sense” of the worlds in which the text is produced and read. While pedagogical practice in literary studies often refers to the variety of frameworks or critical approaches as a “toolkit” or a “menu,” my own feeling is that these are misleading analogies. The approaches are often mutually contradictory, and taking up one involves making certain epistemological assumptions about the way texts work. The notion of a “toolkit” may well encourage students to evaluate and compare different critical approaches from a position in which basic assumptions about the relationship of the text to the world are unexamined: working through the text through critical reading will often empower students to question the framework itself.

It has been my experience, that the Gulf Arabs, by in large, consider critical thinking as simply learning a set of rules to superficially understand text for information. The text is seldom questioned.

Shortly after the test I was placed on probation because the students were not comfortable with my standard American speech or my occasional deviations from the text book (and other practices) despite an investigation that revealed the complaining students had never attended my class and just wanted to be taught ‘the rote’ the way they were used to. Suddenly the ‘why’ of my probation began to make more sense.  Even the Arab supervisors and administrators had to take the test—meaning perhaps ‘the mess’ the department had specifically attributed to the teaching staff was bigger than I and my conscientious Arab friend Scar Face had imagined.

Despite being in the doghouse for not behaving myself and ‘doing the book’, I am still designing and teaching professional development for teachers at the local schools as a master trainer as if my ability to teach was not related to’ my ability to teach’. Like the police doing corner sweeps in Atlantic City when the drug dealers become too visible on the corners, it seemed to me the administration just wanted to show me who’s still in charge despite the test results.  Control is a big thing in Arab management. Like in many instances in the west, it is sometimes more important than being right or getting the job done.

“Can you talk to them: to get them to change the test,” he asked.

“They’re not listening to me these days”, I said shaking my head in thought that maybe they never had listened.

The sad thing is as long as the Gulf Education considers that their goal of fostering analyitical and critical thinking will some how rise of the miasmal of the skills training paradigm, breakthroughs in student performance will continue to go as far as Bertha the hampster will in her cage on her trend mill.

After six years of doing this ‘dog and pony show ‘of Arab schools wanting to create the equivalent of nuclear fusion (critical thinking) with a plastic boat and a propeller (English language training) at the insistence of my employers, I am beginning to consider the possibility this cause I have enlisted myself; making some of the deep seeded and festering problems that exist in Gulf Education my own personal holy grail maybe a bit Quixotesque a mission to abide in. Perhaps it might be better to take a ‘professional’ deep breath and possibly concede to the notion that some people just need to sink in order to learn to swim.

One Response to ‘Critical Thinking’: The Missing Link in Saudi Education