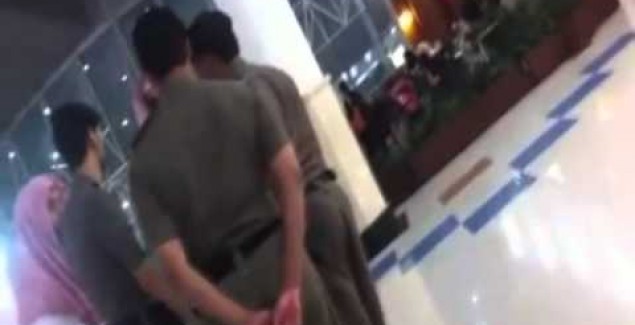 Last Tuesday a Saudi woman in Riyadh was followed at a major mall by the Commission for Promotion of Virtue and Prevention of Vice (CPVPV).

They demanded that she leave the mall because she had nail polish on. She in turn refused and started videotaping the incident on her cell phone and informed the CPVPV member that she’s also uploading it to social media. Then she called the police and in the second video you can see three police officers trying to calm the situation and hear her tell them that she’s afraid to leave the mall because the CPVPV might follow her in the car and purposely cause a car accident.

Before I go any further, I’m going to give the CPVPV statement to news organizations and a CPVPV sympathizer’s witness statement:

Informed sources confirmed to Sabq that the incident occurred last Tuesday evening, indicating that the Commission’s headquarters are in the process of raising and reporting the issue to higher authorities, asking them to take necessary action against the girl according to the rules and regulations in regards to her videotaping and disseminating videos of members of the commission during their official business on internet sites. The sources also informed Sabq that the security authorities used the mall’s security cameras to see the merits of the case, especially after identifying the girl through the phone number on which she called the police accusing members of the commission of harassing her.

The witness statement was made by a Talal Al Gharmoul who claims to have been there and tweeted:

By God, I stood by and witnessed the incident, the woman does not have an atom of modesty. Her face was only covered by a transparent veil over her mouth. She also had a lot of make-up on. In addition to her wearing an abaya accentuating her waist, very similar to a dress. She had her mobile’s earphones in and she was reeling and swaying in front of the men. The CPVPV advised her politely and respectfully. Suddenly she raged against them and started screaming until everyone heard her cries. What was of the CPVPV men only to act leniently while she held up her cell phone. Then she sat beneath the escalators with her mobile held up and her earphones in and continued to scream at the men. She had her legs crossed with one foot swaying left and right in a shameful way. The CPVPV men stood about 4 meters away out of modesty. The CPVPV men insisted on her leaving the mall politely and respectfully while they faced her insults and profanity such as her saying “Do I look like I’m naked to you?”

On Twitter many insist that it was not only her nail polish that upset the CPVPV and that she was behaving immodestly and dressed suspiciously. However if we go to the video, at the beginning she asks the CPVPV sheikh is it because of the nail polish and he doesn’t deny it. Then later when the police arrive the sheikh claims that she wiped the nail polish off and she raises her hand and says no that she didn’t. And he never says anything about her having too much make-up on. At the beginning he says that she has no right to uncover her face and instructs her to dress like her “sisters” pointing at women with their faces covered. In the second video after the police arrive, he says that he also objects to her lipstick.

Another issue that many harp on is that she shouldn’t have taped and disseminated a video of government employees doing their job. And this one is such a double standard argument because it never came up when the minister of agriculture was talking to a citizen dismissively or when the minister of civil service was talking to job applicants or when the Saudi ambassador to Egypt spoke disrespectfully to a woman. In all of these cases the person taking the video was hailed as a hero.

And the whole thing about the sheikh being lenient and polite is shown on the video to be untrue. From the very beginning he disrespectfully shouts at her “Yalla, yalla get out of the mall, yalla out!”

Finally the CPVPV are portrayed as sacred and the embodiment of how Islam was at the time of the Prophet (PBUH). However everything I’ve ever read points otherwise. The way a CPVPV sheikh struts around malls with a fancy cloak on his shoulders and two subordinates flanking him enjoying the atmosphere of fear their entrance causes and sometimes going as far as terrorizing people is not the way I’ve read that the Prophet behaved. For example just a couple of weeks ago I wanted to leave a restaurant during prayer time. I simply needed to exit the restaurant but the management refused out of fear of the CPVPV and the manager who was obviously traumatized started shouting that he would be called an animal and spend another night in jail for opening the door to just let me out during prayer time.

Meanwhile if you actually go back to religious and historical texts you find that the Prophet (PBUH) was known for his humility, quiet demeanor and wearing simple and humble clothing. And ironically the first head of anything similar to the CPVPV was not a man but a woman called Layla daughter of Abdullah Al Qurashi and known by Al-Shifa.

In a hadeeth about the Prophet (PBUH) towards the end of his life, he was with another man as a beautiful woman came towards them to ask the Prophet a question. The Prophet’s companion obviously liked the way the woman looked because he was staring at her. The Prophet did not harass the woman or demand that she cover her face or leave the premises as did the CPVPV sheikh last Tuesday. He simply turned his companion’s face away.

Here I’m going to put the actual hadeeths I was referring to above and their sources so that people don’t start accusing me of lying since Saudis are rarely exposed to hadeeths that prove that many women at the time of the Prophet were empowered and did not cover their faces.