Conformity: Don’t Get Caught In Its Snare 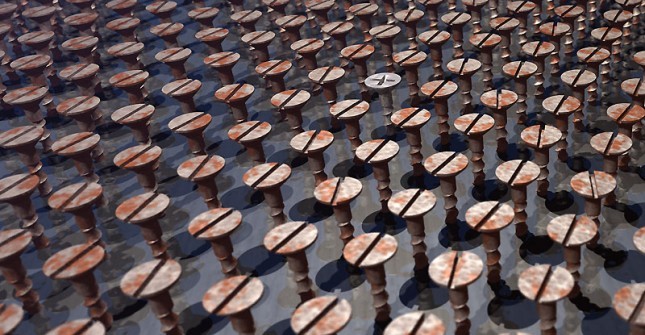 Something of a departure from the usual aimless half-thoughts, this is a list of half-thoughts. It’s come about because of a number of conversations I’ve had recently that have revolved around individuality, independence and creativity vs suits. When I first went to work, I used to wear a suit. It was very much expected of you back then. I can’t remember precisely when all that changed for me, but I have a horror of them now. Both the apparel and the phenotype.

The requirement to conform to a given set of behaviours encapsulates those behaviours as essentially sacrosanct. The very nature of conformity is that it is beyond question, because questioning it is in itself non-conformist. How many times have you heard, ‘Don’t ask questions, just do it.’ – shortened by Nike to a cunning call to brand-conformity. Conformity is comforting because you can be lazy and just settle into that nice rut. So much easier to do than break out and ask quite why we all jump off the cliff because it seems, well, sort of counter-intuitive.

2) Conformity is a bully

The first thing those with a vested interest in conformity (often, although not always those higher up a given food chain than you) will do is use it to beat you around the head. It’s marvellously self-fulfilling. ‘I don’t see anyone else around here questioning it. It’s the way we do things around here, so you’d better knuckle under before there’s trouble.’ Stop thinking, stop questioning, just put on your grey drone suit and join the rest of us in the chain gang.

3) Conformity is a liar

There’s a wonderful scene in the novel Watership Down, in which the little group of travelling rabbits the book is set around come across a foreign warren. The rabbits talk in the book, which does involve a certain degree of willing suspension of disbelief but there we go. The foreign rabbits are incredibly well fed, fat, sleek and behave in a more ‘sophisticated’ manner, including doing odd things like dancing. But the word ‘snare’ must never be uttered in the warren on pain of death. It turns out the local farmer is feeding the rabbits, whose warren is a police state, and snaring them. Conformity, see?

4) Conformity is not community

You’ll often hear calls for conformity dressed up as a requirement for ‘the good of us all’. The idea is simple: if you conform, we all benefit. But if you should wander, poke around in cupboards and in any other way refuse to adopt a set of accepted behaviours, you’re somehow threatening the fabric of society itself. The truth is, any community that requires conformity as a rule for inclusion is inherently flawed and will fail in the face of a community that is both inclusive and diverse. When I talk about communities, by the way, I don’t mean neighbourhoods or clubs. I mean any group of people gathered around a task.

My own little foray into experimenting with communities, GeekFest, excited me principally because of its diversity and inclusiveness. But where individuality is subsumed to the need to conform, diversity goes out of the window and insularity comes with its bags packed for a nice, long stay. Insular communities start to rely on their insularity to maintain cohesiveness and so is born racism and other forms of intolerance.

If we all need to conform and conformity is our principal attribute, we can quickly see that anyone who does not conform to the ideas or practices we conform to is not acceptable to our community. They are not welcome. We do not want them – or the ideas, challenges or new practices they bring. It’s counter-genetic, this idea that we cannot explore or adopt the new because we are bound by conformity. It creates communities doomed to eventual failure.

It’s the process of exploring the new, of tweaking the nose of the everyday and flicking the nipples of the mundane that gives us that marvellous force, creativity. Dreaming up new insights, finding expression that challenges, excites and engages us in new ways is so fundamental to progress and, I would argue, the reason for living at all. If we can’t create, if we can’t celebrate our very ability to think up new and wonderful things, then we don’t have a reason to be. And yet conformity tells us that we mustn’t challenge or invent, but instead tread the well-trodden path. It protects itself by punishing challengers and inventors.

Communities that have been lashed to conformity are inherently unable to change, because change naturally challenges conformity. So how do we improve? We don’t, there’s no need to improve. We’re conforming because it’s better this way, the way we’ve always done it. You wouldn’t understand, it’s not conformity so much as tradition and our culture is inherently celebrated by tradition. We have a culture of respect and your non-conformist ideas are, frankly, disrespectful. And so on. The mantras are quite seductive, aren’t they? But conformity hides behind mantras like this, smothering change and blocking new and better ways of doing things because we’re stuck with the old ways. There’s nothing wrong, incidentally, with celebrating tradition. But that’s different to using tradition as cladding for conformity.

And so we have a call to be mediocre. Don’t question the way we do things, keep your head down and knuckle under like the rest. Don’t shine, don’t be brilliant. Don’t show anyone up or go around knocking down walls or exploring better, more efficient ways of doing things. Don’t be outspoken or go to the line because you believe passionately in something. In fact, we’d be grateful if you wouldn’t be passionate about anything. Passion can be so, well, challenging.

And so we see conformity is the natural enemy of all innovation. Some of the most innovative companies in the world also manage to be highly conformist, though. So where does that fit into McNabb’s Theory of Conformity? Because conformity is often selective. You can play in the playground, but you can’t play in the classroom. Innovation can happen in the areas where innovation is permitted, but not in the firewalled areas where we demand conformity. It’s an insidious thing. But the weakest part of organisations, the blind spots, is frequently where conformity rules. You might invent the world’s greatest transistors, but if you’re totally closed to a new approach to, say, your communications strategy, you’ve created a weakness through conformity.

There. Glad I got that off my chest…