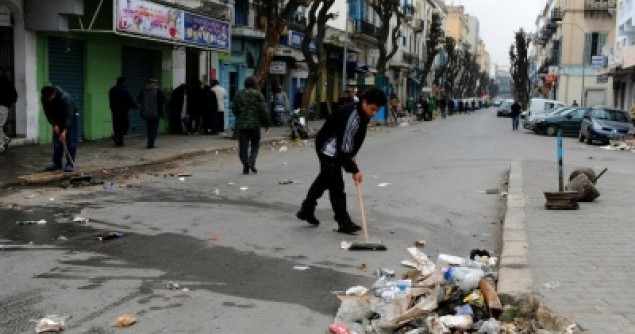 On 23 September, Tunisians took to the streets – but this time it was not for a political demonstration. To recognise Tunisia’s National Environment Day, members of several Tunisian civil society organisations got together to clean up streets and sidewalks in the capital, many of which had been neglected since the revolution.

Under the Ben Ali regime, civil society organisations were almost non-existent and the few organisations that did exist were controlled by the state or by political parties in the opposition.

The type of civic activism on display in September, however, is what characterises the new Tunisia. It would not be possible without noteworthy individuals who have found ways to build bridges between the state and citizens. Omar Ayari, an ordinary Tunisian and computer graphics specialist, and founder of the Union of Tunisian Humanitarian Associations (UAHT), is one of these.

UAHT links the country’s humanitarian organisations so they can coordinate work on the ground, nationally and across regions.

Ayari’s vision was to improve Tunisia’s civil society and establish a cooperative relationship between the state and its citizens.

Just after the revolution, there was still some mistrust of civil society associations. Because of this climate, Ayari’s first step was simply to create a Facebook page bringing together all of Tunisia’s humanitarian associations with links to their websites. In addition to making information more accessible, the project also created a network of associations and a way for them to communicate.

According to Ayari, if associations communicate with each other, they can work cooperatively and better fulfil their goals. “I think that humanitarian work shouldn’t be competitive, but rather complementary and synchronised to allow a real process of development to begin.”

This work, for Ayari, is an alternative to pre-revolution politics. He explains, “It’s a shame to systematically mix humanitarian associations with political manoeuvring.” He notes that there are individuals for whom “a connection existed and will always exist between politics and the humanitarian field.” However, he points out that “both are ways of engaging in the public sphere, but the philanthropic element [of humanitarian work] must not be forgotten.”

The political transition after the revolution permitted initiatives like Ayari’s to find supporters. “Now we can talk about our initiatives, which under the former regime wasn’t possible . . . Now we can openly point out what’s not working and encourage citizens to get involved.”

The first example of a successful solidarity initiative creating positive change occurred when the UAHT came together to help a young girl suffering from lung cancer. Loujain Ghazouani needed two operations, one of which could not be performed in Tunisia. To make this possible, the UAHT organised two fundraising events for Loujain and publicised her case through the Internet, television, radio and the press.

The UAHT worked on her case with two other associations and conducted an intense publicity campaign, which led Tunisia’s national health insurance fund (CNAM) to agree to cover the expenses needed for the operations.

This initiative is just one of many that have demonstrated that collaboration between different associations can have greater impact than one working alone. It also helped create a stronger civil society that can serve as a genuine intermediary between citizens and the state – which in this case responded positively to citizens’ efforts.

The most concrete advances of post-revolutionary Tunisia are increased community engagement and the establishment of a civil society that allows people to bring forward and deal with public problems transparently.

Ayari works towards this goal through an engaged network, which by extension is helping the Tunisian population engage in civil society, and trust that it is possible to create change. Ultimately, it is efforts like these that bring Tunisia one step closer to a successful transition to democracy.