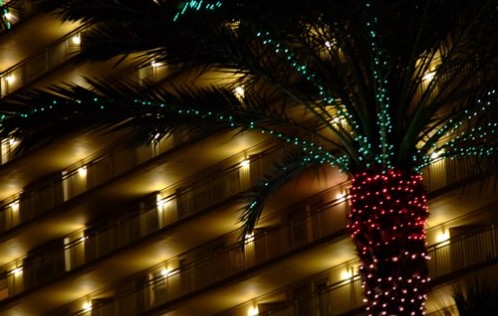 Christmas in Saudi Arabia. The phrase doesn’t exactly roll off the tongue. But celebrating the holiday in some areas of the kingdom is possible as long as expatriates use a subtle approach.

Christmas has always been kept under wraps in the kingdom as a holiday celebrated in the privacy of one’s own home. There are no church services in the Land of the Two Holy Mosques, but private services are held in Christian homes and residential compounds. Holiday parties complete with festive decorations are commonplace in virtually all the compounds, although they are usually kept indoors.

Outward displays of non-Muslim religious symbols or prostlyzing can lead to nasty experiences with the Commission for the Promotion of Virtue and the Prevention of Vice, but a personal copy of the Bible is allowed into the country. However, Saudi attitudes toward Christmas vary.

“We had Saudi friends with kids who had lived abroad and used to enjoy Christmas, not as a religious holiday, but as a social one,” says a 41-year-old Christian Arab-American, who lives in the port city of Jeddah and asked not to be identified because of the sensitive nature of Christian holidays in the country.

Given the pressure to keep one’s faith close to the vest, celebrating Christmas for Saudi Arabia’s 1.2 million Christians  is a tricky proposition.

An American blogger who writes under the name Susie’s Big Adventure told The Media Line her early Christmases were unlike any she had ever experienced. “My first two Christmases in Saudi Arabia were pretty non-existent, except for my son and I watching our favorite Christmas movies all day,” says Susie, who is married to a Saudi.

Subsequent holidays brightened when she purchased a small tree, lights and glass ornaments. “Our Christmases have been very low key,” she adds.

Yet Christians celebrating Christmas and the retailers who cater to the expatriate population, which numbers about eight million, have taken a page from the St. Valentine’s Day playbook to ensure that all the trappings of the holiday are recognized: Christmas tree ornaments, tinsel, colorful wrapping paper, material for Santa Claus suits and food.

To cater to the increasing popularity of St. Valentine’s Day, florists traditionally stock up on red roses. Lingerie shops carry more stock and prominently display playful red and white-laced lingerie. Christmas celebrations in some regions of Saudi Arabia follow a similar pattern with varying degrees of success. Riyadh and the rural villages and towns are barren of any signs of Christmas. And Madinah and Makkah are closed to non-Muslims. However, cosmopolitan Jeddah and communities in the Eastern Province are islands that subtly mark the holiday.

“I feel the Christmas season every year,” says Filipino expatriate Bayani, a Christian, told The Media Line. “I work at a big department store in Jeddah and about two months before Christmas we get a shipment of displays and inventory that sell the Christmas spirit.”

Christmas often immediately follows the Islamic holiday of Eid. The Eid holidays follow the Hijri calendar and are held at different times of the Gregorian calendar. Department stores order inventory and displays to reflect the festive nature of Eid, and by doing so ensure that Christmas-style decorations pass through customs without interference, says Bayani. This Christmas season provided challenges for the department store since the holiday arrived three months after Eid.

“We still managed to dress the store in red and white, maybe a little tinsel,” he says. “It doesn’t scream ‘Christmas’ but customers get the idea.”

Islam does not recognize specific dates as holidays except for Eid Al-Fitr and Eid Al-Adha. Saudis often ignore birthdays, including the birth date of the Prophet Muhammad. Sufis, however, celebrate the prophet’s birthday with elaborate meals and singing, which perhaps comes closest to how Christians celebrate the birth of Jesus Christ. Yet some expatriates say that Saudis are not blind to the emotional resonance of Christmas.

Australian expatriate Steve Smith, 37, of Jeddah, told The Media Line that he and a Briton are the only non-Muslims employed by an information technology company. He expected a lonely Christmas.

“We worked Christmas Day, of course, but after work my Saudi boss invited us to his home for a Christmas dinner,” Smith recalls. “He had his cook make us a full dinner with trimmings. I was gobsmacked. We didn’t talk about Christmas at the dinner table, but it was his way of saying he appreciated that we were alone in a foreign country and that we needed this holiday.”

Yusef A., 57, a Saudi who supervises about a dozen Western non-Muslims at an Eastern Province company, told The Media Line that he makes it a habit that his Christian employees have something to do during the holidays. Speaking on the condition that his full name is not used, he says that he usually schedules a private room at an upscale restaurant or hotel for a dinner or to contribute funds for a party if they live in a residential compound.

“They are a long way from home and Saudi Arabia can be tough on foreigners,” he explains. “Besides, I want to keep them here and working for me.”

While religious authorities take a dim view on any hint of public Christian holiday celebrations, one Saudi businesswoman, who asked not to be identified, says that some Saudis are learning the holiday is more secular than religious for many Christians. As a result, some people take a relaxed view. She said many Saudis studying in the U.S. and Britain appreciate the holiday atmosphere, department store displays and home decorations.

“My husband and I studied at MIT in Massachusetts in the’90s, so after five years we were fully exposed to the holiday and were often invited to parties by our non-Saudi friends,” she says.. “We’ve come back to Saudi Arabia with the habit of giving each other one gift on December 25. It’s pretty harmless and reminds us of the old good days in the States.”

An assistant manager at an upscale hotel on Jeddah’s Corniche at the edge of the Red Sea says he notices a surge in dinner reservations on Christmas Eve, Christmas Day and New Year’s Eve. New Year’s Day is another holiday largely unnoticed since Saudis follow the Hijri calendar.

“A lot of people come in on Christmas and New Year’s with their families, and even Arab couples, although I don’t see any Saudis,” he said. “I see couples exchange gifts at the table. It’s not a big deal.”