Christmas Cartoon Urges Iraqis to do it for ThemSelves 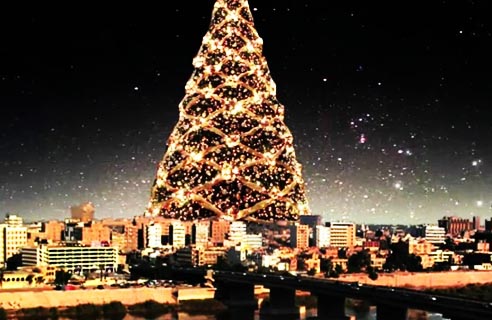 The team of “Only for Iraqis” has again surprised us with a new online comedy animation video with a powerful message: Do it yourself and do not wait for others to do it for you!

Their new video starts with the narrator saying that on Christmas Eve the world was celebrating, except Baghdad because it was coated with lack-of-electricity darkness.

In the dark, an Iraqi child was waiting for Baba Noel (Santa Claus) to bring him the bicycle he wanted for Christmas. An Iraqi old man comes across him and tells him to go home because Baba Noel is giving presents in America, not here.

The kid becomes angry and tells the old man he’s not going home unless he gets his bike. He was wondering why Baba Noel was giving presents to children all over the world, except the Iraqi children. The old man feels bad and decides to help.

He calls Santa but Santa was aggressive. He didn’t like how his name was turned into “Baba Noel.” He then calls Iraqis “terrorists” and says he’s not going to Iraq.

Not willing to give up, the old man calls all his friends and acquaintances and posts a wall ad, calling on all Iraqis to bring their generators to use them light the Christmas tree and to do Christmas themselves this year. And they did!

They set up the huge Christmas tree and decorated it with lights they turned on through their generators. After the lights were on, Iraqis took to the streets to celebrate Christmas, and their city became brighter than ever, first time in years.

The message in the video is very powerful. It urges Iraqis to stand up and start rebuilding their country themselves, instead of waiting for others to help them. It’s time to do that before it’s too late.

30, Iraqi, from Baghdad. Currently in the US. Writer/Arabic Editor of IJNet (www.ijnet.org/ar) at the International Center for Journalists (ICFJ) www.icfj.org in Washington, DC.