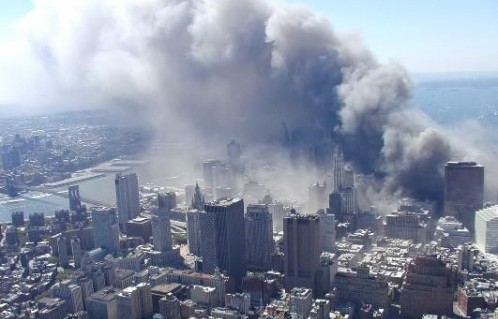 It used to be in America that people might ask “Where were you when John F Kennedy was assassinated?”  Now a common question applied globally is where were you during 9/11.

I’ll never forget that moment.  I had come to the United States the last week of August 2001 from New Delhi, India for my son’s early September wedding.  I was to return to New Delhi on 12 September 2001.  Abdullah and I considered each other a couple by then and were engaged in our long distance relationship.  He was still in Pakistan at the time with the Saudi Embassy.  My son’s wedding was beautiful and exceeded all my imagination.  It was a wedding and also like a family reunion.  It was the last opportunity I had to dance with my father before he passed away.  My son and daughter-in-law left for a Caribbean honeymoon and would return to the Washington, DC area the evening of 10 September 2001.  I stayed at my son’s place while they honeymooned, taking care of their cats.

The morning of September 11 I went very early to CIA headquarters in McLean, Virginia for some final briefings and meetings since I planned to depart for New Delhi the following evening.  By 7:30 I and several others were already in a conference room ready to begin a series of meetings on activities and programs in India.  As we were immersed in our discussion a secretary abruptly opened the conference door shouting for us to turn on the tv; that an aircraft had just flown into the World Trade Center.  As a group we seemed to gravitate our eyes toward the outside windows seeing the clear and piercing blue sky.  Even before knowing of the second plane that was coming we all seemed to know that this was not an accident by any means.

The second plane hits and there is organized chaos.  Task forces are formed on the fly and few are left uninvolved.  I knew I would not be returning to New Delhi the following evening.  I assisted as I was able in the capacity of a TDY’er (temporary duty) from a field station.  I had no illusions of tasks assigned due to rank.  I knew as a TDY’er I did not have access to the computer systems and databases and was happy to be used as a ‘gofer’ just to be of use while America was clearly under attack.  Eventually though I was told to go home.  It was another week before I was finally able to board a flight for India.

In the meantime it was life in a surreal Washington with no airplanes or helicopters in the sky.  People were glued to the tv and for a period of time, routine life simply stopped.  I was so grateful my son and daughter-in-law were back in the States.

Abdullah and I made contact on 12 September 2001.  He was in an agitated state and frustrated that he was in Pakistan and full of anger that his countrymen were the primary participants.  I called him and his voice broke upon hearing my voice.  He had been fearful to try and call me thinking that I would never want to hear his voice due to the anti-American rhetoric coming from the Middle East region.  We both shed tears while talking on the phone, reaffirming our love for each other and our great disdain on such an attack made upon thousands of innocents.

As the 10 year anniversary of 9/11 approaches media coverage and stories are routinely covered.  This article from Associated Press discusses experiences of some expatriates who were in Saudi Arabia during 9/11 and the reactions they experienced.  An event like 9/11 made an impact on every individual regardless of location, nationality or religion.

I think it is interesting and allows us to further learn from each other to reflect and share where we were at that time.  What was YOUR initial reaction?  What was the reaction of those around you?  How have you or your world or way of doing things changed since 9/11?  Is the world safer today?  Has the risk and threat of terrorism been further marginalized since 9/11?