Can a non-Muslim visit a Mosque in Saudi Arabia? 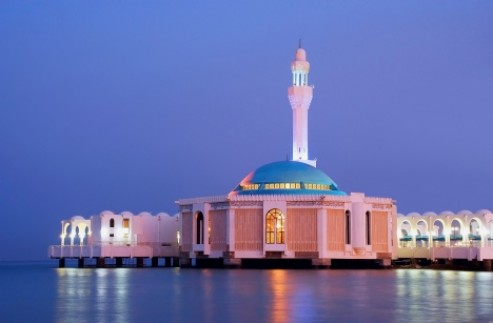 One thing that will likely stand out to a non-Muslim expatriate in Saudi Arabia are the number of mosques.  For example, from my villa in Riyadh there were no less than 8 mosques within a three minute walk of each other.  This is not a coincidence either.  Part of the custom and tradition in Saudi Arabia is for each neighborhood to have a minimum of one mosque.  For many, one of the greatest honors is to be able to build a mosque in honor of a loved one who has passed away.

But, can a non-Muslim expatriate enter a mosque in Saudi Arabia?  After all, non-Catholics can enter the Vatican and non-Christians are welcomed at churches around the world.  While the holy mosques of Makkah and Medina are off-limits to non-Muslims, the rest of the country and its mosques are open.  However, there are protocols which must be followed.

Any expatriate, male or female, should enter a mosque clean.  A woman’s face should be free of make-up. As a non-Muslim it is recommended that he or she not enter the mosque during the time of prayer but rather between prayer times.  Similar to entering a church, he or she should be respectful and quiet.

First of all, for a woman, not every mosque will necessarily have a women’s section.  However if there is a women’s section then it would be okay to enter.  A woman must be properly covered and in this case she should not only wear the abaya but also have her hair properly covered and tucked away in her hijjab.  She should not forget to take off her shoes for individuals enter the mosque either barefoot or wearing socks. I recommend after entering, she kneel down on her knees and quietly take in the essence and ambiance.  It is NOT appropriate to take photographs from within a mosque, especially if it is a local neighborhood mosque.

The non-Muslim expatriate man should also be properly dressed.  He does not need to wear a thobe but he should be wearing pants which fall below the knee.  Sleeveless shirts or tank tops are not appropriate.  The man should also remove his shoes and leave them outside before entering.  Just like a women’s section, he should not take photographs or talk loudly.

Be sensitive to where you are and what is going on around you before choosing to enter a mosque.  If you are in an area unknown to you, then it may be better not to enter a mosque until you are more familiar with the area and surroundings.  If entering a mosque and there are Muslims inside, if you are given looks of suspicion or feel like you are intruding, then quietly exit.

Always remember a mosque is a place of prayer and worship for Muslims.  It is not a museum.  The ideal way to visit a mosque as a non-Muslim in Saudi is to be taken to the mosque by a muslim who can also be a defacto guide and readily answer any questions.