‘The Cai-Bai Ring’: Egypt’s ‘New Civilisation’, Made in UAE 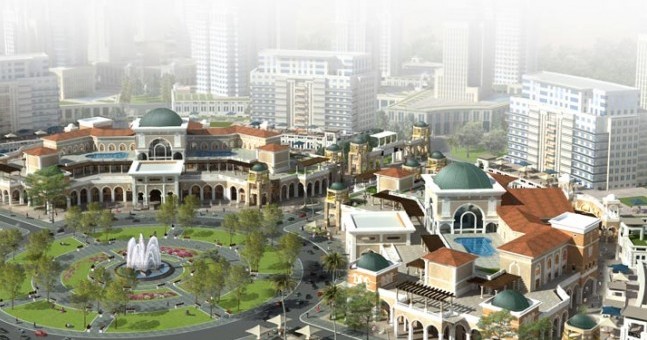 When I first spent a bit of time in Cairo around 15 years ago the mention of ‘Dubai’ when asked where you were living usually evinced a grin from the questioner.  ‘Ah, Dubai’, they’d say.  ‘All those tall buildings and shiny glass.’ And then the voice would go quiet, a little conspiratorial lean in and some variation on the following words: ‘You don’t really think that Dubai could ever be the real centre of the Middle East.’  You knew it wasn’t far away now, the ‘c’ word. ‘Cairo will always be the real capital of the Arab world. It has what Dubai will never have – ‘civilisation’.

A visit to Ramses II’s resting place in Cairo museum, a wander among the riches of Tutankhanum’s raided tomb, a slipped bakshish enabling climb inside a Giza pyramid convinced you that they did have a point.  Civilisation is metaphorically coming out of Egypt’s ears.

Fast forward to last week and a new reality became evident to me. Every trip I’ve taken to Cairo previously has been spent in and around the island of Zemalek which sits on the Nile close to the heart of downtown Cairo.  Whenever anyone asked me what it was like to spend time in Cairo I’d say two things – first that it was possible to love and hate Egypt in the space of 30 seconds  and second it was impossible to go to Cairo without having an adventure.   You would likely have an adventure and experience both positive and negative emotions on the hour or so journey to your hotel in Zemalek on arrival.

This time though the signs on the ring road pointed to ‘New Cairo’ and I found myself based in a hotel which sat next to a development that was eerily reminiscent of Arabian Ranches in Dubai.  Close by is ‘Downtown’ development with shiny cafes and restaurants of a sort that are very familiar to all of us who find ourselves dragooned to Dubai’s shopping malls every now and then.

I was working with mainly young Egyptians who were in their late 20’s and early 30s.  What was striking about them was their enthusiasm and optimism.  The news from Egypt over the last few years encourages a pretty bleak view of the immediate future.

These individuals, however, spoke with infectious good humour about their personal prospects and those of their families.  They are all employed by a major international multinational company and so are relatively well-paid and feel, they said, a sense of security.  Another equally striking fact about these young people was that the vast majority of them had returned home recently having spent between five and ten years working in the UAE.  They were very grateful for the experience and the training that they had received when working in Dubai or Abu Dhabi and felt that they were pioneers in bringing international standards of management into the Egyptian workplace.

Speaking about these conversations to a journalist friend who is based in Cairo he told me that the flight to the edge of Cairo by those who have money enough to live in gated communities and can afford a Starbucks skinny latte on the way to work is in full flow. He had, he said, written about the topic which he called ‘the Detroit-isation of Cairo’.  This was, he believed, a prelude to a near future when the historic centre of Cairo would be inhabited by the poorest members of society before a decision would inevitably be taken to bulldoze and start all over again.  There was evidence, he said, of individuals and companies quietly buying up parts of central Cairo in prime spots in anticipation of such a plan coming to fruition.

We talked a bit about the influence of Dubai on Cairo and I reminded him of the earlier conversations I’d had around the term ‘civilisation’.  He said that the outer circle of Cairo was gradually being encircled by these new developments – it’s Dubai in Cairo I said or perhaps we could call it ‘the Cai-bai Ring.’  Maybe worth trademarking that term.

Whatever it is it’s evidence of the profound, though underestimated, influence that the UAE  has had in forging a ‘new Middle East civilization.’  The derision and back-handed comments that Dubai has endured in capital cities around the Arab world for some years don’t seem to be shared by the young people from those countries who have come and made a life for themselves here.  Now returning to their homelands to help forge a new future they have a very different view of the Emirates and its role in their future.