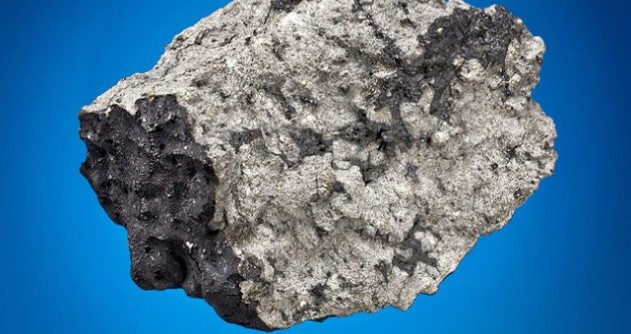 A meteorite that landed in the Moroccan desert last summer was ejected from the surface of Mars 700,000 years ago, a new study reports. The meteorite is composed of an abundance of black glass, with noble gases trapped inside. On Sunday a piece of it will be offered at an auction in New York.

The meteorite ( fragment pictured above), named Tissint, after a nearby village, is only the fifth Martian meteorite that people have witnessed falling to Earth. There are about 60 known meteorites thought to be from Mars. But Tissint is unique because it fell into the desert and suffered little damage from Earth’s environment.  According to  Dr Hasnaa Chennaoui Aoudjehane, an astronomer at the Hassan II University in Casablanca, it is in perfect condition. “We had no rain between the moment it fell and the moment it was collected,” Dr. Aoudjehane  said. “It was fresh, and it is very exciting to be able to analyse this. Based on the noble gas measurements, we could calculate the ejection age of the meteorite”.

The meteorite may have been knocked loose from Mars by an asteroid or some other large body that hit the planet, the researchers believe. The impact may have also caused some melting, creating the black glass and preserving a Mars “signature” inside the glass.

When Dr Aoudjehane first heard news of the fireball that lit up the sky she traveled 700 miles from Casablanca, over the Sahara, to find the “strewn field” — where pieces spread across the sand. She was not the first one there. “The first thing that I see is hundreds of people in the middle of nowhere. And this is something that I will never forget.” Men, women and children were camped out, hunting for the pieces. Meteorites are often found in North Africa — unusual rocks stand out in the desert — and they bring a good price.

A piece of the Tissint meteorite will be offered at a meteorite auction in Manhattan that is billed as the biggest ever, and the fragment on auction starts at $230,000.

It is believed that the fragment on auction fits exactly with the piece (pictured above) at the Natural History Museum in London. Hopefully someone will be generous enough to reunite them.