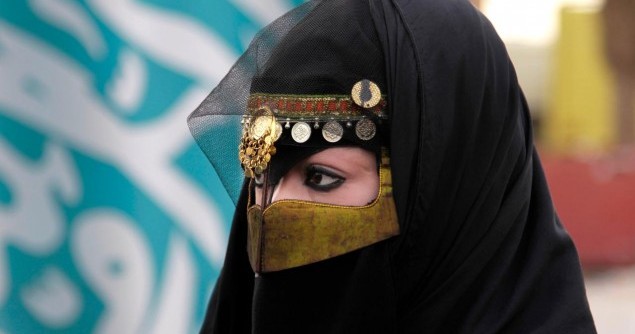 My Saudi wife has warned me on more than one occasion not to tell her brothers in Madinah that she can do anything she pleases and go anywhere she wants. And if she wasn’t so lazy to get her driver’s license while in the US last summer, she could drive the car through the streets of Jeddah for all I care.

She tells me they would look at her with pity because her husband is not man enough to protect her and keep her out of trouble.
So I keep my effeminate Western ways to myself. Whenever her brothers visit, I keep her busy serving Arabic coffee and sweets. I then have her sit at my feet and look up at me wondrously as I speak of things I know nothing about (read: American).
The payback is I get a month’s worth of dish-washing and laundry duty. I will also sit in mall parking lots with the other drivers while she goes inside to meet her girlfriends for coffee and a Cinnabon.

But I am supposed to get the last laugh, at least in theory. Last April, the Saudi government implemented a new policy to send text messages to male guardians when their wives, daughters or whatever leaves the country. The text is meant as an electronic version of the piece of paper that male guardians sign to allow Saudi women to board flights when traveling outside the Kingdom. It was supposed to be voluntary, but it seems it is now compulsory. The policy even extends to all dependents that may wish to leave the country.

Saudi women — for reasons unknown to any man — claim this is Big Brother and an insult to every woman. The new policy treats women as children and second-class citizens.
I say hooey.

As an expat who desperately wants to assimilate into Saudi society, I think it’s a great idea. It’s almost as good as getting the Saudi citizenship.

Alas, the Saudi government has disappointed me. Not long ago my wife traveled without me to England on business. I know this because I bought her airline ticket. I helped her pack her bags to ensure there were a dozen or so photos of me among her things. I drove her to the airport. I didn’t kiss her goodbye, but I did give her a firm handshake. I watched her wave at me as she left for the departure lounge. She seemed pretty happy about the whole thing.

But I received no text from the government warning me of her departure. Complete silence. How did I know she went to England and didn’t switch planes in Paris to head for the sun-soaked sandy beaches of the Caribbean? Did she really meet her sisters in Newcastle? I saw a video of her in England, but how do I know it wasn’t staged like those fake videos of US astronauts walking on a sound stage made to look like the moon? These are questions that nagged at me during her two-week absence.

Last weekend, she took another trip (that’s twice in less than six months) for a conference. As I drove home from the airport after dropping her off, I waited for a text to let me know the Saudi government had my back. Nothing. I’m still waiting.
I am confident that sooner or later the government will catch on and log my mobile phone data into their system. The days of my wife blithely waving bye-bye at the airport knowing she can go anywhere and do anything without me aware will be a distant memory.

In fact, I don’t think the text message system goes far enough. Text messaging male guardians should be expanded to other areas, such as shopping malls.

In the end, though, the Saudi government will have the last laugh. As it stands, I now must give my wife permission to leave the country. Yet, by a quirk with my Iqama, I also must receive permission from my wife to leave the country. So on our next trip outside the Kingdom, my wife and I will each be handing permission slips, with each other’s signatures, to the immigration officer at the airport.