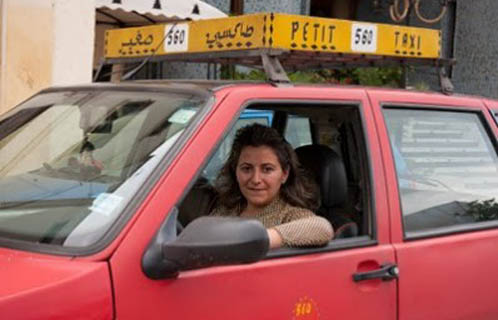 Lamiae is a formidable woman. In the face of opposition from her family, her husband, the government and society, she held firm to her ideals and in doing so broke new ground for women in Morocco. How did she do this? By becoming the first female taxi driver in Fez and the second woman to drive a cab in Morocco.

“I wanted to be the first woman in the history of Fez to take this job, so that people would be aware of how important it is for women to take such challenges,” she said.

“I want to be an example to other women, so we can [eventually] see women driving taxis, buses or even working in construction.”

A 36-year-old mother of two, Lamiae has diplomas in science, IT and accounting, but when she lost her teaching job she needed to find work to help support her children. She chose driving a taxi because she wanted to be in control of her working hours.

“This job allows me to manage my time around all my different commitments and helps me make sure I spend enough time with my kids,” she said. Her husband was already a taxi driver and she firstly had to convince him that she should contribute to the family income in the same way.

“It took me time to change his way of thinking, I’ve been pretty diplomatic explaining to him that his income isn’t enough, we have kids and expenses…so I eventually managed to convince him,” she explained.

“But other men tell my husband “You’re not a man! You let your wife go out and do such a job?

“This is difficult for him.”

The second difficulty was her parents. Born to a well-bred, conservative, Fassi family Lamiae had a hard time persuading them that she would not be in danger as a female taxi driver.

“My family worried a lot…but I trust in God, I don’t think that any harm can happen to me because…I always read the Quran and pray before I go out for work…and this is the greatest protection for me,” she said.

“I’ve never faced any problems, also because I make sure to choose the right passengers, I pick up women or couples and I make sure not to go to dangerous areas…so I feel safe.

“My family was not supportive in the beginning – but they are proud of me now.”

Her biggest hurdle however, was the local authorities. They refused to give her a permit to drive a taxi in Fez and only after she doggedly fought for eight years did they finally relent. Her first attempt was in 2000, but the government refused to give her the permit simply because she was a woman. She made significant efforts to “claim her right” to be a female taxi driver and eventually, with persistence she managed to get behind the wheel in 2008.

“My case was difficult because I was on my own, if there were at least ten of us we could have made a change more quickly,” she explained.

“It was impossible [for the government] to imagine that a woman could drive a taxi, so the men didn’t take me seriously, which is why it took eight years for me to be a taxi driver.”

In the meantime another woman, Zakia Mezzourm – the subject of the documentary Taxi Casablanca – had begun driving a grand taxi in 2004. Lamaie did not know of her existence until recently but is proud that she is not alone in her efforts to change attitudes towards women in Morocco.

“Women should fight for their rights otherwise nothing changes,” she said.

“Women have achieved a lot…yet we have to stand up for our rights and take example from each other so things will be better. I want my daughter to be better than I am, and I wish the same for all Moroccan women.”

Surprisingly, the most negative reactions she gets when driving the taxi are from other women.

“Women do not encourage me as men do, many women don’t like to take the taxi when they see me driving, but I guess this takes time,” she said.

“As I assert myself in this job, people will get used to it and respect it. It was worse when I started, it was so difficult, everyone looked at me in a hostile way, but I managed to win over the appreciation and respect of other taxi drivers, and now they all see me a sister, because I’m always there for them when they need help. However, women still don’t encourage me but I can’t let those comments bring me down.”

The initial reactions she had to fight from men were stereotypical, those that thought she should be at home and baking, not driving a taxi, those that said she was a bad driver and men who tried to compete with her on the road. Yet with patience and perseverance, she has been slowly winning their respect. However, her reaction is less sympathetic to men who complain that with current unemployment levels she should not be taking jobs from them.

“My wage is very basic because it’s not my taxi, but women choose to work for basic salaries while men don’t…this is why unemployment seems to reflect more negatively on men,” she said.

“So, instead of complaining, men should take all sorts of [low-paying] jobs like women do – I would sell tissues by the side of the road to support my family. If I had the same attitude as men I would have never found a job, but I couldn’t just do nothing and wait for a job with a good salary.”

As well as educating society by setting an example, Lamaie has also managed to educate her husband – who now shares domestic responsibilities at home while she works – and educate herself in mechanical matters.

“I can fix all sorts of problems, I learned this through experience, I had to learn these things,” she said.

“Every woman who drives a car should have a basic knowledge of how to deal with mechanical problems. Now I always make sure that everything is alright with the car before I go out to work, so I avoid any breakdowns.”

When she was younger, Lamaie dreamed of becoming a pilot. It didn’t happen for her but now she hopes that by setting an example she can help other women shoot for the sky.

“I’ve always wanted to do something that would make me feel unique and I just thought ‘why not?’” she said.

“I have the ability to face the way people look at me…they don’t like what I’m doing, yet I wanted to challenge the way people see women. Doing this job I can control my time, spend time with my kids and be my own boss. Life is hard and once you have children you need to offer them a comfortable life and support them to make their dreams come true. I want to see women taking all possible jobs and encourage women to challenge themselves. That’s what I’m aiming to achieve, and that’s why I took this job, to set an example to young women and show them that anything is possible.”

With thanks to Robert Spencer Harrison for the photographs, and Maryam el Haytami for the translation.