Banned Egyptian Graphic Novel ‘Is Back on Shelves’ 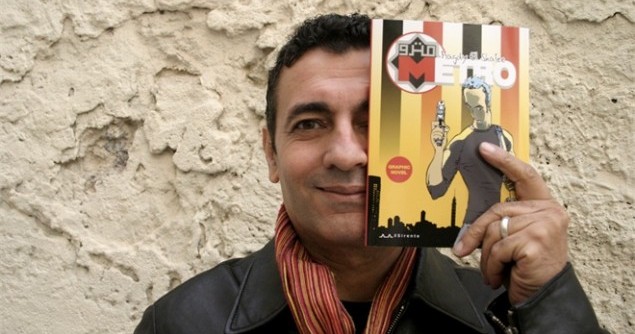 Five years after its initial publication, Magdy al-Shafee’s graphic novel Metro is once again available in Arabic in Egypt:

Metro is Egypt’s first graphic novel and a vivid portrait of poverty and corruption under Mubarak’s rule. When it was first published in January 2008, it was quickly banned on the ground of “offending public morals”: the police raided the Malameh publishing house, confiscated all copies of the book, and banned Malameh from printing further copies. Al-Shafee as well as his publisher, Mohammed al-Sharkawi, were charged under article 178 of the Egyptian penal code (which criminalizes the printing or distribution of publications that “infringe upon public decency”) and ultimately each fined 5,000 LE.

An English translation by Chip Rosetti was published in June 2012 and made available in Egypt, and Dar Merit was rumored to have acquired the rights in Arabic. Yet until recently, Metro was still unavailable in Egypt in its original language.

Five years later, Metro is back on the shelves in Arabic. It was republished in August 2012 by The Comic Shop, “the first publishing house in the Arab world specialized in comic books for adults,” which launched in October 2011. (Much of their website is still under construction, but they do offer a small tantalizing selection of other graphic novels from the Middle East, in both Arabic and English). In Egypt, Metro is now being sold at Kotob Khan, which advertises itself as the only shop in the country carrying copies. (Editor’s note: directions to the store.)

It’s certainly an exciting time for graphic novels in Egypt: the collections Autostrade and خارج السيطرة (Out of Control) were published in 2011, the same year Division Publishing House was founded with the goal of ‘spreading comics across Egypt and the Middle East like wildfire.’ In 2012, الفن التاسع (The 9th Art) held a 24-hour comics workshop culminating in the publication of إنت حرّ (You Are Free), and the magazine TokTok is currently on its eighth issue. Yet with censorship concerns under Morsi’s tenure, including attacks on freedom of the press and an increase in lawsuits for ‘insulting the president,’ it remains to be seen whether future graphic novels like Metro will be able to be published without similar concerns.

Previous coverage of Metro on ArabLit:

Magdy El Shafee on the English Edition of ‘Metro,’ Censorship

Elisabeth Jaquette is a MA student in Anthropology at Columbia University and a CASA fellow at the American University in Cairo. She has lived in Cairo since 2007, where she runs an Arabic-English book club and tweets at @lissiejaquette.