Banned: A Day In The Life of a Kuwaiti Censor 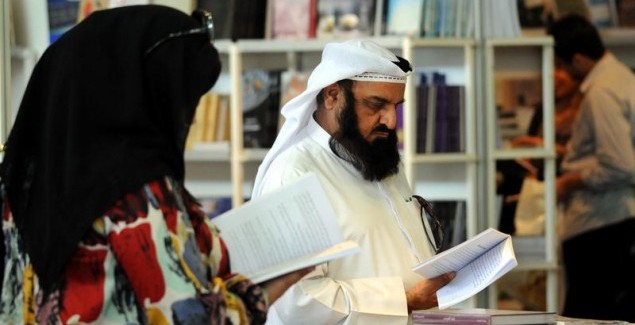 According to the US-based “Freedom House,” Kuwait’s media environment has been “long considered one of the most open in the Middle East[.]” Kuwait was one of just a handful of countries in the region that the political organization labeled “partially free” in their 2011 report, joined in 2012 by Egypt, Libya, and Tunisia.*

However, this “pretty free, comparatively” label is not one all Kuwaitis would give their country’s book culture. One tweeter noted in 2010, “@fajera I get my books either from Beirut or Cairo, half of what I read is banned in Kuwait (everything is banned here)”.

After dozens — or perhaps hundreds (a list wasn’t released) — of books were banned from the 2010 Kuwait International Book Fair, The Kuwait Times quoted an anonymous publisher as saying:

In Kuwait censorship is so severe that we do a self censorship before the Kuwait book fair … We only submit a list of books that we believe might pass censors here and every time something new is banned.

This publisher told the Kuwait Times that local censorship is not only worse than all other Gulf Cooperative Council book fairs but also the worst in the world. He further complained: “I don’t think most of the censors read the books they ban.”

Another publisher said, back in 2010: “I would like to understand the criteria under which books are banned… In this book fair, a book of ours was banned, and I simply cannot see any reasonable justification for it to be banned at all! I just want to meet the person who banned it…. I bet he didn’t even read it.”

Well now, in the same Kuwait Times, senior censor Dalal al-Mutairi claims this month that she and her colleagues do read the books, every word:

Many people consider the censor to be a fanatic and uneducated person, but this isn’t true. We are the most literate people as we have read much, almost every day.

As a censor, I read a book from beginning to the end, word by word. In case the censor makes a mistake, the head of the department will be responsible for this mistake, as they should also read the book.

Indeed, al-Mutairi said, being a censor is nice work if you can get it:

I like this work. It gives us experience, information and we always learn something new.

Unlike, for instance, the regular folks who don’t have access to these books.

So how does it work? Al-Mutairi’s department was set up in 2000 and deals in a number of different languages. She said that, unlike for instance in Egypt, every book must be touched: ”Nobody can distribute any book unless he has a license to do so.”

We have a list of banned books in Kuwait and we deal with publications containing forbidden material that are not on this list, and which we have to censor.

How does one become a censor?

It takes about a year or a year and a half to become a censor, as the person is first employed as a censor assistant. The employee first starts slow in reading and it takes him a week or days to finish a book. Also, beginners are not given political or religious books in the beginning as these are difficult. Instead we give them children’s books or some scientific books, which are easy.

But where do new censors come from?

After graduating and appointment to this job, the new censor receives practical training at the Ministry of Information. For instance, he or she is given a book containing violations to be censored and we see how good they are. Within a year or so, they will be completely trained. Also the employee receives a course about the laws related to censorship. Usually the employees are graduates from the college of political science, history and similar fields.”

If there is a “violation,” then the censor writes a report. And they check up on all parts of the system. Al-Mutairi:

The printing house is responsible for the material and books printed by it and they should inform the Ministry of Information that they are printing a book, and then the book is not distributed without a license. There are some censors and inspectors from our department who inspect different printing presses to check their license.

She particularly spoke about their high period, the book fair:

We start censoring the books in this fair about three months before it is held. We receive about 7,000 to 8,000 books to read. There are about 15 censors working on this fair. These censors take the books home with them to finish their reading. If we find a book containing restrictions, we write a report that is passed to a committee which decides that certain books will be banned from the fair.

Al-Mutairi felt that reports of censorship at the book fair had been greatly exaggerated. Or, in any case, they shouldn’t fall on her head:

Always during each Book Fair, the media writes about banning hundreds of books from being sold. And they blame us for this. The committee that decides the ban consists of members in high positions from outside and inside the Ministry of Endowments and the Ministry of Information. The censor is not responsible for the ban. He only reads and gives his opinion according to the law.

A partial list of books banned from the 2010 Kuwait International Book Fair:

Dar al-Ain (6 banned this year, 8 from previous years, for a total of 14). This year’s banned titles nclude:

One Response to Banned: A Day In The Life of a Kuwaiti Censor