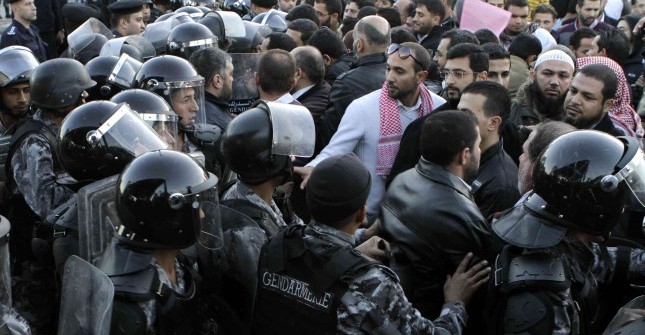 In the context of endless rounds of violence on university campuses throughout the Kingdom in recent weeks, the Minister of Higher Education has reportedly proposed a plan to “stomp out” violence in university campus. The plan consists of the following steps in the SHORT TERM:

1) “…making changes to the admission system and criterion that universities in Jordan currently use, saying that the high percentage of students enrolling in higher education courses in their governorates may have led to the increase of violence.”

i.e. universities have been accepting terrible people, thus increasing admission standards weeds them out and universities will be safe once again from the mongols

2) “…the Ministry of Higher Education will seek to encourage students to attend universities outside of their governorates as a preventative measure…the ministry was working on finding a mechanism to financially support students who cannot afford to study away from their local governorates.”

tribal youth are responsible for violence, thus shipping them out of their local communities will decrease probability of violence

3) “…under the new admissions system, more students will be directed towards studying technical subjects rather than humanities. Currently, 70 per cent of university students are enrolled in humanities faculties.”

i.e. students who study “smart” subjects like science, don’t do violence. Only students studying silly things like language and social sciences have the free time required to be violent

4) “..other recommendations put forward included assessing university regulations governing students’ conduct and drafting a code of conduct to be applied in higher education institutions. If implemented, all students will sign and be committed to the proposed code of conduct when they enrol at university.”

i.e. similar to the code of conduct ministers are made to sign when appointed to office. because signing a piece of paper deters you from corruption or violence

5) “…university employees across Jordan will be given training on how to prevent the escalation of violence if it occurs on campus.”

i.e. professors will be trained in mixed martial arts?

6) “The Ministry of Higher Education’s new strategy also calls for forming a monitoring committee that will be responsible for any violation on campus, upgrading the skills of campus security personnel and ensuring that they have the suitable equipment so as to be able to work effectively, including intensifying security and monitoring equipment such as CCTV. Mahmoud cited the case of the University of Jordan (UJ) as evidence for an increased CCTV presence preventing violence — UJ installed a superior CCTV system, at a cost that did not exceed JD400,000. According to the minister, the move significantly reduced the outburst of violent clashes at the university.”

“In addition to these immediate recommendations, the ministry’s plan also includes long-term goals. These include restructuring academic curricula and the entire system so as to encourage more independent learning, rather than what Mahmoud called “spoon feeding”. The long-term recommendations also call for intensifying cultural activities in universities, and the encouragement of voluntary work and community service.”

i.e. things we’ll eventually, some day, maybe, probably, kind of, depends on the money….get around to

I am not an expert in education nor security – but I am a taxpaying citizen so here’s another way to go about this in my very humble opinion:

How about changing admissions to complement a better quality educational system (that includes both sciences and humanities) rather than changing it just so it’s tougher for the violently-prone students to commit their acts on campus? How about we invest the cost of CCTVs (400k X the total amount of public universities?) and put towards genuine educational reform? How about instead of investing money and time in training university staff to “deal with” campus violence, you put that investment towards training school teachers not to beat kids – something which is a norm in public schools and probably has some effect on yielding violent students headed to universities. How about, instead of spending local governorate money on paying for students to study outside their local communities, thus taking money OUT of the local system – you spend that money on improving the universities IN their local communities?

Normally, the excuse for the lack of educational reform is money. But according to this proposed plan, there seems to be plenty of money to spend on changing admission standards, setting up monitoring systems, paying for students to study outside their local universities, installing CCTV systems, beefing up security (likely metal detectors and campus police), and training campus staff to deal with violence. In short, creating a better security system doesn’t really tackle the larger problems. Imagine venturing in to the poorest ghetto in a random innercity somewhere in the US and seeing the windows borded up with wire, metal detectors, and private security – are the kids there likely getting a good or bad education? Is violence there higher or lower than in some white, middle income, suburban public school? The same logic I feel can be applied here.

It sounds like this plan is equivalent to putting a bandaid on a bullet wound.

For those interested in a bigger discussion, 7iber is organizing a Hashtag Debate on solving problems in higher education, Monday 20th, at the Shoman Foundation between 1st and 2nd circle, at 6:30pm. Details here.