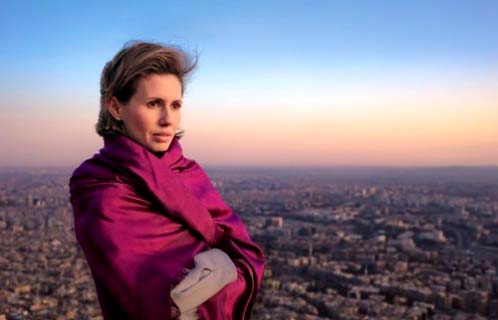 “One can only assume that the Assads agreed to be interviewed for this piece before the current outbreak of unrest made it embarrassing for both for them, and for Vogue,” says Foreign Policy magazine. Well, yes, Vogue admits as much:

The fact that FP missed that point makes me wonder if FP didn’t just read the first paragraph and assume they knew what the whole story was about.

“Asma al-Assad is glamorous, young, and very chic—the freshest and most magnetic of first ladies. Her style is not the couture-and-bling dazzle of Middle Eastern power but a deliberate lack of adornment. She’s a rare combination: a thin, long-limbed beauty with a trained analytic mind who dresses with cunning understatement. Paris Match calls her “the element of light in a country full of shadow zones…. She is the first lady of Syria.”

Words like that are bound to grate in the current climate.

FP argues that Asma should not be flaunting her glamour. If FP bothered to read the article, they would’ve found that she isn’t:

The first lady works out of a small white building in a hilly, modern residential neighborhood called Muhajireen, where houses and apartments are crammed together and neighbors peer and wave from balconies. The first impression of Asma al-Assad is movement—a determined swath cut through space with a flash of red soles. Dark-brown eyes, wavy chin-length brown hair, long neck, an energetic grace. No watch, no jewelry apart from Chanel agates around her neck, not even a wedding ring, but fingernails lacquered a dark blue-green. She’s breezy, conspiratorial, and fun. Her accent is English but not plummy. Despite what must be a killer IQ, she sometimes uses urban shorthand: “I was, like. . . .

But come on, this is Asma Al-Assad, the media-shy opposite of Jordan’s Queen Rania. I have been saying for years that Syria needs to put Asma in the spotlight. Her work – and indeed her character (because that’s what impressions are based on) – needs to be understood by a Western audience. Paragraphs like this are priceless:

Back in the car, I ask what religion the orphans are. “It’s not relevant,” says Asma al-Assad. “Let me try to explain it to you. That church is a part of my heritage because it’s a Syrian church. The Umayyad Mosque is the third-most-important holy Muslim site, but within the mosque is the tomb of Saint John the Baptist. We all kneel in the mosque in front of the tomb of Saint John the Baptist. That’s how religions live together in Syria—a way that I have never seen anywhere else in the world. We live side by side, and have historically. All the religions and cultures that have passed through these lands—the Armenians, Islam, Christianity, the Umayyads, the Ottomans—make up who I am.”

“Does that include the Jews?” I ask.

“And the Jews,” she answers. “There is a very big Jewish quarter in old Damascus.”

The piece (minus the first paragraph, which was probably written by an overenthusiastic editor who has never been to Syria) paints an honest portrait of Asma, and reminds me of David Lesch’s The New Lion of Damascus.