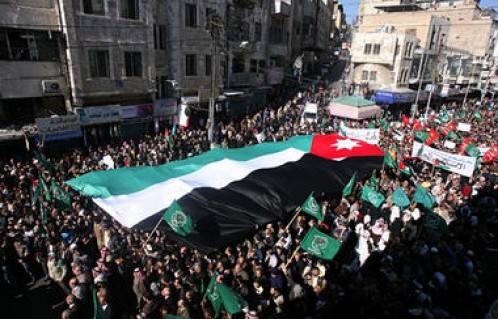 One of things that is perhaps the most difficult thing to explain to a non-Jordanian about Jordan, is regional relativity.

To the average Jordanian, relativity is engrained in us. From birth, from parents, from relatives, from friends, from peers, from the government, from our leaders, from school books, and so on and so forth. From the moment someone is born in this country their political mind is shaped by regional relativity.

They are constantly told that Jordan is the best country in the Middle East because it isn’t plagued with the same unstable elements that are found throughout the Middle East. We are told to count our blessings that we are not Lebanon, Palestine, Iraq, and as of late, Egypt, Tunisia, Syria, Yemen and Libya have all been added to that list. This regional relativity is indeed important context to understanding Jordan, but here, it is elevated to whole other level. A level where the population is brought up to be satisfied with the status quo, and, worst of all, to appeal to the lowest common denominator.

This thinking is so well entrenched in the minds of so many that it dominates the way they see the country, and determines the role they play as inactive citizens. And this is for the most part what the state has spent so much time nurturing, especially in recent years: inactive citizens. The inactive can range from the apathetic to the non-threatening. For it is a population divided between those who do not care, and those who do nothing to threaten the status quo; who do nothing to raise the bar that has been set, who operate strictly within the beltway manufactured by the status quo. And it is one of the reasons we keep running around in circles and wonder why we’re not getting anywhere.

It dominates the way people think, and it is evident in how they speak; how they counter arguments and end discussions.

What is perhaps most nonsensical about all this is the belief that Jordan is somehow protected by a vast impenetrable shield. As if Jordan, along with any other nation in this region, does not have the ability to be incredibly unstable in the blink of an eye. As if Jordan is not constantly destabilized by default every few years whenever a refugee crisis occurs. We’ve put up this shield, this massive comfort zone that allows us, as a nation, to believe we are not only protected, but, simply put, better than everyone else. And the folly behind this kind of thinking is self-evident. How many years have we heard that we have the best education system in the Middle East? Now, here we are, still saying this, while our educational system has been crumbling for well over a decade, and while the Gulf states are taking the lead leaving us far, far behind.

It is this kind of thinking that has allowed us to accept even the slightest improvement as massive progress, when it is anything but. It is the personification of throwing a starving dog a bone, and this has become all the more relevant in a time when reform is on the mind of the nation. Even the most simple act by the government is deemed to be a positive step, and to me this is mind-blowing. It is unmistakeably mind-blowing because for the first time in a long time, our regional relativity actually demands that we be making leaps and bounds. That we implement a blue print for a better country. That we set our sights a bit higher than ludicrous comparisons. That we have better security than Iraq or better education than Sudan or more political stability than Lebanon. Etc.

Instead, we are a nation that is by and large cowering in the corner and thanking the powers-that-be that we are not like those who are worse than us. And if regional relativity has taught us anything is that while we all sink in to the sand at different paces and in different ways, we are all, at the end of the day, sinking.

The cynical and self-defeated among us will say Jordan cannot compare itself to those who are better. That with little resources and wealth, it would be impossible for Jordan to stand next to Japan, or Sweden, or Denmark.

To those who make such faulty claims, they should know that this country is home to some great minds who need only the right environment to operate in, in order to accomplish great things. And the worst part about this is that those who offer nothing but weak contrasts are those who do so in a so-called defense of the country. As if it were some sort of twisted sense of patriotic duty driving them paint the country as being better simply because it’s not worse than those who are currently experiencing turmoil.

When all is said and done, the example should be set by the leader. By the King. No one else in this country has the credibility or ability to change mindsets than the Monarch. That’s just the way it is. Overcoming this regional relativity will hang on bold and courageous moves; daring even, if you’ll allow. Irrefutable evidence that this a country set on progressing despite regional relativity, rather than using it as an excuse for its regression. Evidence provided through actions rather than words; through a sense of leadership not reliant on speeches and public rallies.

What we need is a public resolution made right from the top that declares us a nation that will no longer appeal to the lowest common denominator. To declare us as a nation that seeks to raise it instead.

We should be raising it.