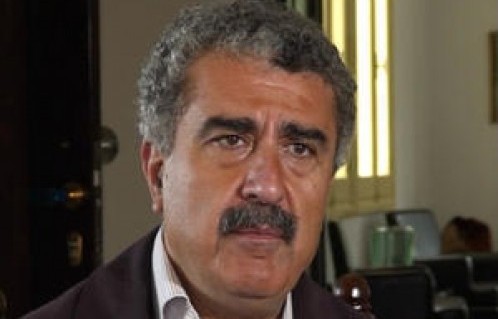 Hassan Daoud, the Lebanese novelist and journalist, delivered an engrossing talk in London last week as part of the capital’s ongoing Shubbak festival. The event was hosted by the Free Word Centre at their premises in Farringdon.

Scholar and Portuguese-English translator Amanda Hopkinson conducted the evening while Dr Nada Elzeer, of the School of Oriental and African Studies, was on hand to interpret. Although the audience was disappointingly small, the event was one of the best of the Shubbak season so far, as Daoud engaged in a wide-ranging conversation, putting forth his opinions on a diverse array of topics: his life and work, the Lebanese civil war and its consequences for Beirut, the current state of Arabic fiction, and the influence of the International Prize for Arabic Fiction (“Arabic Booker”).

Although the event ran on for 90 minutes, it could easily have gone on for another 90, and its end was greeted by a palpable sense of disappointment. Below is a distillation of the evening’s discussions:

On the writing life:

Daoud felt he came to fiction rather late—his first book was not published until he was 33.  He started his career as a journalist during the Lebanese civil war, and the writing habits imposed by that conflict have lasted a lifetime. He usually does his writing in the middle of the night, working steadily from 3 am until 8 am. This is because, during the war, the small hours were the only time when there was some relative peace and quiet to be had. Commenting on the notion that war can drive the creative spirit, Daoud said that actually, no, it actively prevents the act of writing.

The author noted that most Arab writers have held some kind of job separate from their writing—often in the civil service, in teaching or in administration—and pursued their writing outside regular hours. Most cannot live on the earnings from their writing and must do something else besides. For Daoud, that something else has been journalism. He has been a journalist for more than 30 years. He was attached to al-Hayat for more than a decade, and is now the chief editor of the cultural supplement of Beirut’s al-Mustaqbal daily.

On the sectarian ghosts of Lebanon:

The emcee Amanda Hopkinson noted that Daoud’s first book, The House of Mathilde, bears some similarities to Alaa al-Aswany’s The Yacoubian Building in that both treat the building at the centre of the book as a metaphor for the nation as a whole. For Daoud, The House of Mathilde was the story of his own family and the building that they all lived in in pre-war Beirut. (His other novels, like Borrowed Time or Bread-Making Machine, also borrow from people and events in his life.) In The House of Mathilde, Muslim and Christian, Armenian and French and Russian families all lived cheek by jowl without conflict or rancour.

The Beirut of Daoud’s youth, the author noted with visible nostalgia, was “very special,” a beautiful city that underwent an extraordinary transformation as a result of the civil war.

Even physically, Daoud said, Beirut has become segregated. The street in central Beirut called Imam Musa Sadr, which becomes Michel Zakhour and which runs east to west, highlights this segregation. It splits Beirut between north and south – on the Shiite side, you’ll find bookshops that stock little else apart from books and pamphlets on Shiite icons like Imam Hassan, Imam Hussein and the Mahdi.

In response to a question about the West’s role in promoting sectarianism in Lebanon, Daoud unequivocally said that the West or Orientalism “did not make us sectarian—we ARE sectarian. Our history is a history of conflict and you can feel that, touch that every day in your daily life.” He mentioned once going to a book fair in the Shiite-dominated town of Nabatieh in the south of Lebanon. He was startled to find that as many as two-thirds of the books on show were about the Mahdi, and there was next to no modern literature represented in the entire fair.

The war is a pervasive presence in all Daoud’s 10 books, either directly or indirectly. In his view, the war subverted and destroyed the social order in Lebanon; older values of decency and politeness to one’s neighbour died away, while new values surfaced, primary among them the lust for money. “Money protects,” Daoud said, and so everyone wanted to make money in Lebanon. Communities that had previously been accepted without comment or rancour, such as the Armenians, found their status much diminished in the new Lebanon and learnt to be meek in the new status quo. He recalled the example of an Armenian lady, a stall owner, who used to go into his uncle’s bakery to answer nature’s call. The uncle eventually refused to allow her to enter, forcing her to make a longer trek to a local church.

On the ‘Arab spring,’ censorship, and social media:

According to Daoud, old-school intellectuals have been totally surprised by the advent of the Arab spring. To his mind, there has been no worthwhile work by an Arab intellectual (so far) that is able to analyze or explain the phenomenon persuasively. The Arab world has entered a new epoch, and the most eloquent expressions of this new era are coming mostly from new and unfamiliar voices, either in the newspapers or online via blogs and social media.

Daoud is not optimistic about the ultimate outcome of the Arab Spring and fears that forces such as the Muslim Brotherhood will come to dominate the political landscape, imposing its own brand of censorship on writers and journalists. However, he also noted that there have been numerous attempts to transcend censorship—in particular, he is amazed by the boldness and freedom with which recent Saudi women writers have tackled taboo topics in their society.

In an echo of Raja Alem’s comments at the Southbank Centre a few days before, Daoud said that de facto censorship and self-censorship still hold sway in the minds of many Arab writers. If certain regimes gave their authors full freedom, they “wouldn’t know what to do with it.”

Amanda Hopkinson added a comment about the raw material to describe these topics, the Arabic language, being fraught with difficulty,  referring in particular to an Arabic word for “gay” that also means “pervert.”  [Editor’s note: I don’t know Dr. Hopkinson, or her work with the Arabic language, but for a brief discussion of positive Arabic terms about sexuality, visit this page from Michelle Hartman and Dima Ayoub.]

Daoud noted that a major difficulty of writing in Arabic is that the classical language cannot truly capture the mundane activities of everyday life. According to him, this is a big reason why Arabic novels are not transferring to the cinema. In this regard, he noted that Naguib Mahfouz made a great effort to form a bridge between the classical and the quotidian, that he tried to make the Arabic language amenable to his stories about Cairo life. Although Mahfouz’s language tends toward the classical, the characters in his books remain fresh and demonstrably modern.

Asked about the advent of e-book readers, Daoud said that the use of new technology (e.g. Kindle) to read books is non-existent in the Arab world [Editor’s note: Well, not quite.] Facebook and Twitter, though controlled to a certain degree, are very popular throughout the region—he himself has a Facebook page—but Daoud fears that this widespread use of social media may ultimately be to the detriment of literature itself. People are no longer reading books, rather their reading is limited to newspapers and what they find on Facebook, Twitter and the blogs.

Daoud believes that the best works in current Arabic fiction are not getting their proper due from an international audience. In particular, he had strong words for recent bestsellers such as The Yacoubian Building and Girls of Riyadh. Talking about Alaa al-Aswany’s novel, Daoud said that it’s a book that reveals the nature of Egyptian society but does so in an exaggerated, sensationalist manner. As for its artistic accomplishments, there is nothing new in its structure or technique. As such, he said Yacoubian fails to stand out artistically, either among Egyptian novels or in the wider field of Arabic literature.

According to Daoud, the sensationalist content of Yacoubian largely accounts for its runaway success in the Middle East and beyond. He also said that many Arab writers and critics consider it an injustice to more deserving contemporary works that Yacoubian (a work that is “not significant”) has captured so much attention and adulation. Daoud was even harsher on Rajaa Alsanea’s Girls of Riyadh. He said that although it has been through 27 prints, it is not by any stretch an artistic book.

Daoud repeated the charge he has made in recent times (as here) that Western audiences do not want Arab literature to deal with the same topics as they would expect their own authors. They still want at least some hint, some reference to the Arabia of the 1001 Nights, the prevalent attitude being summed up as follows: Why should we be interested in Arabic fiction that deals with “normal” topics when we have enough normality of our own? In this way, Western audiences have pulled Arab authors away from the path of modernity in literature. Western readers are certainly not seeking out the “avant-garde” in Arab literature, rather they are looking for works that transmit a certain image with which the West is already familiar.

In this context, he praised the original works of Ibrahim Aslan which are sadly almost totally unknown outside the region.

Daoud criticised the IPAF, for which he was longlisted for 180 Sunsets, saying that since it started 4-5 years ago, it has become the only reference point for judging Arabic novels. And yet, echoing fellow Lebanese author Hanan al-Shaykh, he said that the winners so far are not representative of the best in Arabic literature. He said that he has written forcefully about this in his columns.

On translation and publishing:

Commenting on the difficulties of translation, Daoud recalled an instance when a colloquialism in The House of Mathilde defeated the translator Peter Theroux. Daoud had used a colloquial term for the pullover that his aunt used to wear, a word that would normally translate as “treasure.” Theroux translated the word quite literally, implying that the aunt wore piles of treasure on her body. It was not until Daoud sat down with his editor, spending 10 days in London and 10 more days in Beirut over the translation, that such bugs were spotted and fixed. While he did not give an opinion on the quality of subsequent English translations by Randa Jarrar and Michael Scott, he did mention that out of the four translations of his books in French, two were very poor.

Daoud also ruminated on the fragmentation of publishing in the Arab world. He recalled that once upon a time, Cairo and Beirut were the dominant centres of Arab publishing. Everything worth reading used to come from these two cities. But one legacy of the Lebanese civil war has been the loss of that status—Beirut no longer holds its central role, and every Arab country now publishes and reads its own literature. Were he to read about an interesting work that had come out in the Maghreb, say in Morocco, Daoud said, he would not be able to get hold of that book so easily.

Editor’s note: Some opinions, notably the insinuation that 33 is old for a debut author, are not shared by ArabLit management.