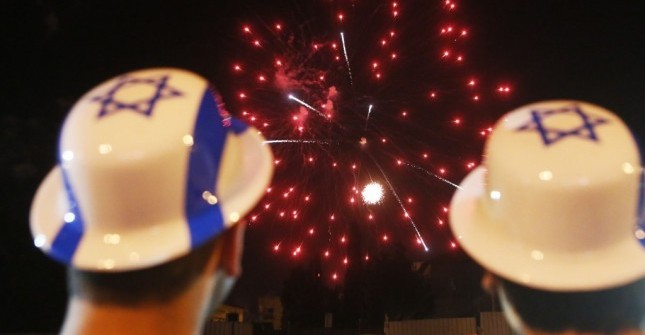 “Do you speak Hebrew,” he asked in me (in Hebrew). “No, but I speak Arabic. Do you speak Arabic?” I replied (in Arabic) to the drunk twenty-something Israeli at an ATM in West Jerusalem. He looked at me for a moment like he was hearing gobbledygook. Then — “Arabs! I hate Arabs!” he exclaimed throwing his arms up for the big finale: “They want to kill us! They want to kill us! I hate Arabs!”

Abruptly a journalist friend pulled me away thinking that the conversation would turn to blows. The night was Yom Haatzmaut, the April 15-16th celebration of Israel’s 1948 declaration of Independence. The air was full of irresponsibility. Myself, I was foolish to think I could put up a defense in a street beating—”there’s two of us and he’s shorter than me,” I said. My friend, however, was less interested in his colleague goading a racist to punch us, despite how righteous our bruises would be.

Nearby on Yaffa Street there was a flood of other drunk Israelis. Intersections to side roads that sheltered rows of bars were blocked by checkpoints. Security officers loosely patted down bags and stopped the occasional pedestrian. The hired hands gave me the impression that they were not looking for things, but persons—and by persons I mean Palestinians. Although I cannot say this definitively, it is widely known that there are only two bars in West Jerusalem where Palestinian can comfortably get inebriated. And so the lax checkpoints lend themselves as a visual marker for who is celebrating Independence Day, and who is not allowed to pass.

In Israel, Yom Haatzmaut comes the day after the Memorial Day for fallen soldiers and the day before Palestinian Prisoners’ Day. It is the season for national exuberance. But in Jerusalem tensions run high throughout the year. The drunkenness that tags along with holiday outdoor dance parties and pop music acts as a lubricant to expose underlying feelings of racism—”Arabs! I hate Arabs!“

Yet even on an average day in the holy city some Israelis view the Arabic language itself as a provocation. About a week before Independence Day I was riding the light rail, a line serviced by Veolia that is the only public transportation running through both East and West Jerusalem. Standing in the rare un- segregated crowded car, a middle-aged Israeli woman spoke to a group of younger Palestinian men. The men wore jeans, tee shirts and sweatshirts and carried tied black plastic bags. In the West Bank and in Palestinian businesses in East Jerusalem, vendors package products in medium sized blue or black bags, while Israeli businesses typically give out shopping bags with words or prints. Because the men were dressed down, carrying the bags and heading towards the Damascus Gate—the location of the bus station for rides to the West Bank—they clearly looked like Palestinian day labors with special permits to work in Israel. The woman had picked up on this.

When she spoke I could not understand her words. Yet it was obvious that she upset one of them. The youngest man in the group of five spoke back to her in Hebrew. He was agitated. I understood only the phrase: “why, because we are Arabs?” At the next stop the women got off. Then the men switched to Arabic. I eavesdropped.

I remained quiet throughout the incident. In the moment of the first conversation, the one with the Israeli woman, I knew something was afoot, but I could not translate the altercation. But during the Arabic recounting of events I understood what had transpired.

Apparently the woman had asked to see the Palestinian group’s rail tickets. The youngest protested the question, leading the woman to explain something like “you look like you didn’t pay.” The youngest man then told her that every day he, and other Arabs are asked to show their tickets. Even the police, he continued, ask just him and then move on.

An older man sitting in the group tried to calm the youth whose feelings were hurt as they discussed what had just happened. The youngest looked sick of everything.

Because I was listening in, I kept looking over at the group. They noticed. I looked away. I am a creep, I thought. Something racist happened and I just sat there—like a quiet idiot—and now something else was happening. My intermittent eye locking was also getting mistaken as a gaze of contempt. But at this point, what could I say or do? And for that matter, even if I had understood the first conversation in real-time, what would it matter? The situation showed that small realities and hardships for Palestinians living under occupation and working in Israel are beyond capabilities of rectifying. If I said something after the fact, it would only be to absolve myself of guilt. To be a narcissist, showing that I am different from this woman. I could not change anything for these men. And it troubled me that speaking would be a selfish act and not a pious act, which only troubled me more because I realized I was still only thinking of myself.

I continued to replay this incident over the next week. At the same time a painful lump was growing in my intestine, the result of a medical condition that runs in my family. The bulge protruding from my abdomen served as a reminder to my helplessness, which is why on Yom Haatzmaut I asked the Israeli man if he spoke Arabic. I knew what I was doing, but didn’t care. I wanted to make the inner discomfort match the outer. I knew the man would be upset by the question. So I guess I was looking for trouble. I guess I was looking to recreate the scenario, but direct the outrage at me. I guess I was looking to get punched in the face.

When I am disappointed in myself I tend to internalize, which is perhaps the most ineffective way to deal with self-loathing. Through genetics I have a predisposition for my insides to crumble. I could feel the process starting to happen and I got feisty over the lack of control I have on my body, the occupation and on the racist Israeli public transportation rider. Anything I would have said that day in the light rail would have been more about my hero fantasy than actually assisting these men, who clearly did not need any assistance. They stood up for themselves and called out racism when they saw it. I am not part of their story and mouthing off at an ATM the week after was like recording a B side to a record that no one will listen to anyways.

It is hard to propose a solution for diffused racism. A re-education camp for bad behavior? No, there needs to be a psychological shift separate from equitable policy. And I don’t see that shift playing out in the light rail or in the street celebrations for Israel’s Independence Day.

Under International Law Jerusalem is a divided city, with East Jerusalem occupied by the Israeli authorities. But under Israeli law, East Jerusalem was annexed to the Jewish state in 1980. Increasingly the areas that are beyond the separation wall, such as Qalandia refugee camp have been de facto ghettoized to the Palestinian Authority, despite its location within the Jerusalem borders and not the West Bank. These people pay to the Jerusalem municipality around 26% of the revenue generated from taxes. But the city only doles out to Palestinians 5% of the funds. Such concrete discrimination is easy to point out. And perhaps it also forgives and encourages a social framework where shouting “Arabs, I hate Arabs!” does not so much as turn a head.