Arabic Chat: An Encounter With Hatred On a Train 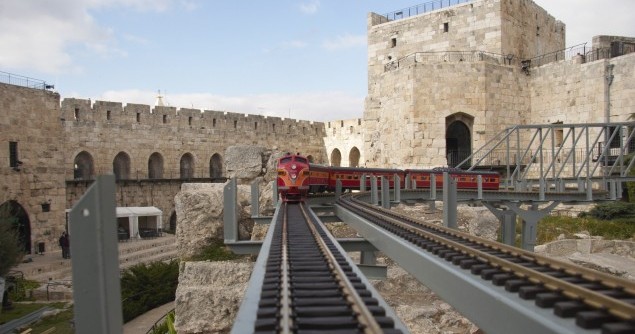 We are on the light rail, gliding through Western Jerusalem. The same light rail that snakes through the Eastern/Palestinian parts of the city, ending in the settlement of Pisgat Ze’ev.

This train, like almost everything in this city, runs heavy with the weight of politics, of history and of language.

We are two Jews. My friend wears a kippah, I wear a hat. And as we glide through the gentle-stoned buildings of West Jerusalem, we speak to each other in Arabic, an oddity for this city in which Jews and Palestinians are separated in virtually every way- physically, legally and linguistically.

Both of us grew up observant Jews, with deep connections to Israel. We met at university, a small school in Vermont where both of us chose to study Arabic.

Both of us felt a deep compulsion to understand this culture with which our people have become inextricably linked. A culture which we are often told is to be mistrusted. I remember living in Israel during high school and enjoying the rhythms of Arabic music, but always being a bit worried that the lyrics were actually anti-Jewish tirades.

Learning the language, I realized, a bit sheepishly, that while there certainly are a few songs that talk about Jews unpleasantly, for the most part, Arabs sing about the same things I sing about: romance, parents, the ocean, food and more romance.

We were not the only ones who sought to deepen our understanding of the “other” through language. More than half of the students in both of our respective Arabic classes were Jews, despite our school being less than 10% Jewish. With our Arabic as a guide, we threw ourselves into this unknown world: my friend spent part of a year living in Jordan, and I lived in a Palestinian village over a few summers.

We often practice with each other, for fun, but now as we glide on this heavy-light rail we both recognize that the language we are speaking has a deeper significance. Everyone around us is staring at us, two young Jews speaking Arabic loudly.

“I wonder what everyone thinks,” I say to my friend, in Arabic.

He laughs, and responds that he’s not sure, but they all certainly seem to be thinking something.

As if on cue, a petite, gentle-looking girl sitting next to me turns to us, and asks, in Hebrew-accented English, “What language are you speaking?”

“I know someone who would want to kill you right now.”

My friend chimes in, “You know, [the Jewish philosopher] Maimonides spoke and wrote in Arabic.”

We arrive at our train stop and walk out into the Jerusalem night, chuckling but shaken, still speaking Arabic.

The interaction was both a sad and fascinating one, indicative of many of the currents of fear and confusion that run through Jerusalem today. If only this girl knew Arabic, she might not imagine Arabs to be saying something like, “When shall we kill the Jews?”

Rather she could truly understand that most often Arabic train conversations sound more like, “How will I pay for my children’s school bills,” or “Did you see the excellent game between Real Madrid and Barcelona?”

We are living here together with each other, and we will all continue to live here together, God willing. Perhaps freer conversation and more finely trained ears will serve to break down the barriers of fear in our hearts.

Moriel Rothman is an American-Israeli activist and writer. He current lives in Jerusalem and is a New Israel Fund/Shatil Social Justice Fellow and active with Rabbis for Human Rights.