The Ongoing Battle Against ‘Honour Killings’ 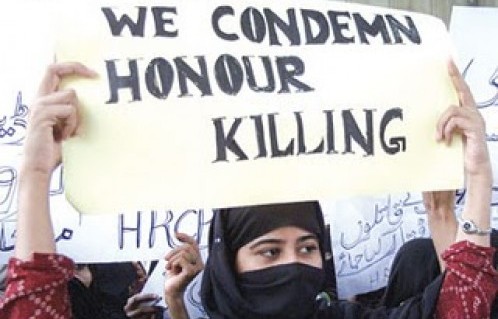 Women in Arab countries have become increasingly visible in demonstrations for democracy, especially in Egypt and Tunisia. However, they still face several hurdles, many of which were discussed at a recent training program in Stockholm for opinion makers from the Middle East and North Africa. As a journalist from Cairo, I had the opportunity to get to know different people from the rest of the Middle East, as well as Sweden, to understand what women experience in different contexts.

One of the most important issues women face are so-called “honour” killings. Across the world, too many women are murdered by their male relatives, because they have “dishonoured” their families by engaging in “unacceptable” relationships.

Although having a sexual relationship outside of marriage is what usually comes to mind, causing “dishonour” may also include marrying a man from different religion or sect, or even a husband the family simply doesn’t accept.

Sadly, “honour” crimes continue, primarily because of the absence of effective regulation and the lack of implementation of existing laws, in addition to negative attitudes towards women.

But slowly, governments are doing something about it.

According to the Ma’an News Agency, Palestinian Authority President Mahmoud Abbas ordered an amendment to the existing “honour killing law” in May, which states that perpetrators of crimes “in defence of family honour” should no longer receive lenient sentences. This decision came after the Ma’an News Agency highlighted the case of Ayah Barad’iyya, a 20-year-old woman from Hebron who was drowned by her uncle because he disagreed with her about the man she had chosen to marry.

Earlier, in 2009, Syrian President Bashar al-Assad issued a decree to amend the Syrian Penal Code with an article that confers a more severe sentence for “honour” crimes than before.

Article 548 of the Syrian Penal Code previously stated that anyone who commits an “honour killing” could claim mitigating circumstances and receive a reduced sentence. The new article, however, clearly states that murder in the name of “family honour” would result in a sentence of no less than two years. Article 548 was amended again in January 2011 to increase the penalty from two years to five to seven years.

However, Bassam El-Kady, the director of the Syrian Women Observatory (SWO), one of Syria’s main women’s rights organizations, said that the “article should be cancelled, not amended”, echoing sentiments of many women’s rights activists who believe the sentence isn’t harsh enough.

Individuals and organizations are also working to end these crimes. Breaking the silence around the act is one of their most important tools.

One of these efforts is Murder in the Name of Honor, a book written by the Jordanian journalist and activist Rana Al-Husseini in 2009 to raise awareness of the brutality of these killings. The book chronicles Al-Husseini’s 15-year journey to uncover stories of violence against women and draw attention to the fact that this is a global epidemic, not something that only happens in Arab or Muslim communities.

In Egypt, the Center for Egyptian Women’s Legal Assistance (CEWLA) started a project four years ago, focusing on four governorates in Upper Egypt. The group uses different activities and media programmes on local radio and television channels to break the taboo around discussing crimes of “honour” by allowing those listening to the shows to call and ask questions or share their stories.

A Facebook group, “No Honor in Crime” also works to raise awareness about the issue and talks about positive steps taken to combat “honour” crimes.

The Jordan-based group, which reaches out to Arab activists in all countries, decided not to focus on honour and human rights, but instead on debating “honour” as a concept.

By creating spaces where “honour” was discussed as a concept, participants had to subject their current understandings of honour to logic and reason, and therefore had to take a more critical attitude to the issue. The mission of the group therefore became a “society-wide conversation to reclaim honour”.

But another factor in women’s lives might actually have the greatest impact. According to the September 2005 Population Reference Bureau Report, Arab women now have similar or higher levels of education compared with their husbands, especially in Egypt, Jordan, Lebanon, and Palestine. Women are fast becoming more educated, and information is an important source of empowerment, as education will offer women more opportunities to work and become financially independent. In a few years, this could result in more women speaking up for laws that protect their rights – and countries instituting more policies that show they are listening to women.

Rasha Dewedar is a freelance journalist from Egypt with special interest in covering Middle East, gender issues and science.

One Response to The Ongoing Battle Against ‘Honour Killings’