Aqaba: To Boldly Go Where No King Has Gone Before 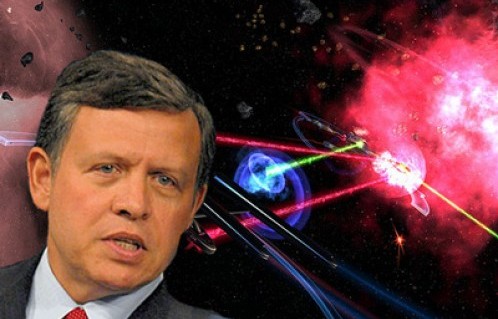 The Hashemite Kingdom of Jordan has big plans to renovate the port of Aqaba, and among them is the building of a $1.5 billion Star Trek theme park powered by green energy.

King Abdullah of Jordan is a huge Star Trek fan, and appeared in a cameo in Star Trek: Voyager

The mixture of futurism, utopianism, environmentalism, American pop culture, and Middle Eastern politics in this news item is too powerful for an old Trekkie like yours truly to pass up.

American television serials have been an important part of t.v. history in the Middle East, as they have been in much of the world. In the Arab world typically they have been broadcast with subtitles (back in the 1970s I learned some Arabic in my leisure time that way, in Cairo, Beirut and Amman). In contrast, in Iran they were dubbed into Persian, and I watched a Star Trek episode in that language in Tehran in 1976, before the ayatollahs banned Americana as a tool of the devil.

Back in the days when there were few channels in the Arab world, before satellite t.v., sometimes a whole season of American soap operas like Falcon Crest (I know) were broadcast as a bloc, one every weekday night until the season was finished, and you could hear a pin drop in Cairo during that hour. Now, there are satellite channels that specialize in delivering American serials.

I can’t say that I am aware that Star Trek has been particularly popular in the Arab world. The Star Trek wikipedia entry is a stub. Among the few Arabic web page entries I could find for the serial was a 2009 announcement that MBC-2, a Saudi-owned entertainment satellite channel, was offering a free Star Trek t-shirt or mousepad if you could answer the trivia questions at its Star Trek web page. Leonard Nimoy (who played Spock) recently endorsed a Palestinian state as part of a two-state solution, which caused a flurry of reporting on Star Trek in Arabic. Of course, reception studies for American television serials among Arab publics are virtually non-existent, so it is hard to gauge the impact of or interest in the series.

As an afficionado of science fiction, I read fanzines like Locus, and have noted that the reports on fandom throughout the world are extremely uneven. That is, science fiction seems to be popular in Romania, but not in Zambia. Now, you might think that it depends on how urbanized a society is, or how many engineers and other technically trained people it has. But I don’t think that is the explanation.

I have a different hypothesis about the relative popularity in various regions of the world of science fiction. It is influenced a bit by Frederic Jameson’s thesis that literature in the developing world is often a national allegory. I think science fiction is popular where scientific and technological innovation is explicitly part of the national project. Thus, it was produced everywhere in the old Soviet Union, even in largely rural areas like Tajikistan, because scientific modernity and invention was key to what it was to be a Soviet citizen. It is popular in Communist China for the same reason, even though that country still has a lot of rural villages. Also in Brazil. Of course, it is big in Germany, France and the UK, and Western Europe generally.

Given that “Arab researchers and scientists account for only 1.1 percent of global scientific publishing, and spending on scientific research lies below 0.3% of GDP in the majority of Arab countries,” it is no surprise that science fiction just is not a big genre in contemporary Arabic literature. That is, it is not a genre on which the national allegory can easily be inscribed.

The lack of scientific and technological productivity in the region is owing to the same forces that created economic and infrastructural stagnation (the Oil Gulf is excepted)– major resources were simply stolen by the ruling elites and dedicated to their villas and foreign investments rather than being invested in the universities and research institutions. This major failure to boost research is one of the reasons that they lost militarily and geostrategically to their rival, Israel. The bad governance also has an impact on public attitudes. For most Arabs, science and technology is something that is constantly coming from the outside, almost never something invented locally. It is not participatory, not part of their national project. Rapid technological change, especially if it affects employment or the relative power of groups and states, may even fuel resentment against the outside world. The turn to religion, a putting of faith in forces outside ordinary reality, makes sense in a context in which there is little human scientific and technological agency. (Arabs know very well how to use technology once they acquire it, they are just not the heroes of its story.)

So King Abdallah’s love of Star Trek is a little idiosyncratic. And the theme park is after all intended for foreign tourists.

But the use of alternative energy for the park is the one bit of it that has a local context. Research and development in green energy is expensive, and deploying the solar panels and wind turbines is a substantial investment that will pay off only over time. That is why investors in this sector are typically well-heeled venture capitalist with deep pockets, or are governments. One of the ironies of the current energy scene is the United Arab Emirates’ project called, Masdar, a green-energy town of 30,000. There was at one point a plan to build a bigger version of Masdar in Jordan itself. Alternative energy faces obstacles in the region because behind the scenes, the Saudis, who give out a lot of foreign aid, lobby against wind and solar (they are afraid their oil will fall in value). But this attitude of theirs may be changing, and the Revolutions of 2011 have anyway reduced their clout in this regard. I don’t know how anyone would have known about it in the English-speaking world, but the first Egyptian solar power plant, funded in part by the European Union, opened this month in Bani Suef.

So renewable energy, for the non-oil Middle East states, is one potential area of innovation where at least a few local leaders and environmental groups are taking some initiative. It is no accident that it is this technology that is being associated in Jordan with the Star Trek theme park. That is, the Arab world may be groping toward a new national allegory, in which solar energy will be central.

In the meantime, King Abdallah needs to move his country more rapidly toward being a parliamentary democracy with full legal rights and liberties for all citizens, of the sort characteristic of the United Federation of Planets in the Star Trek universe. The age of the Klingons and Romulans in the region is passing.