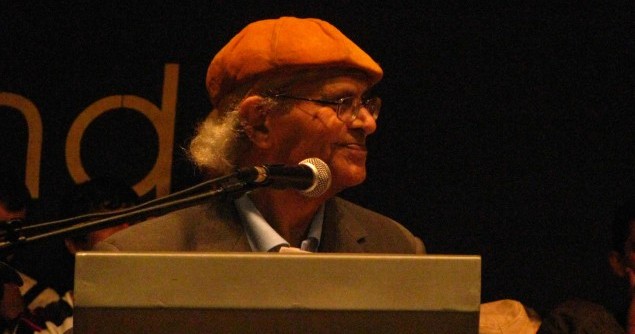 Fadhil al-Azzawi, renowned Iraqi author, was briefly in London to judge the Saif Ghobash-Banipal prize for Arabic Literary Translation, the results of which will be announced in January. Banipal took the opportunity to host an informal discussion with him on 6th December at the Arab British Centre, which Amira Abd El-Khalek attended:

Al-Azzawi was born in the multi-ethnic, multi-lingual city of Kirkuk, Iraq, in 1940. He studied English literature at Baghdad University and journalism at Leipzig University. He is a poet, novelist, literary editor and critic. His works include The Beautiful Creatures of Fadhil al-Azzawi, Cell Block Five,  trans. William Hutchins, Miracle Maker, trans. Khaled Mattawa, and Last of the Angels, trans. William Hutchins, to name a few. He is a contributing editor at Banipal and has written many articles for the press.

During the 1963 coup in Iraq, al-Azzawi was among many intellectuals and political activists thrown into prison. He has written about the experience and various methods of torture that he and his fellow prisoners had to endure.

Fadhil al-Azzawi is well known in the Arab world as a poet but also as a novelist, a critic and a short story writer. To him, writing prose is as important as writing poetry; what is important to him is the text. It is the writing process that al-Azzawi is interested in. If there is something that he wants to write about, he will do so in any form, be it a poem, or a short story or a novel. His works often combine elements of both poetry and prose.

His first published work, The Beautiful Creatures of Fadhil al-Azzawi (1969) is a concoction of poetry and prose; a sort of meta-fiction. It is considered one of the avant garde works of modern Arab literature. Al-Azzawi believes that writing is like a street that combines all genres. “In the Last of the Angels, you can find a lot of poetical moments,” he says. “Also in my poems you can find stories. In every poem is a story… I like literary takes that deal with me as a poet or as a novelist.. all these genres mixed together.”

In answer to a question on what makes him move from one genre to another and where exactly does he find himself, al-Azzawi referred to Nietsche who mentioned that in every artist is a child that wants to play. To al-Azzawi, “the whole idea of modernity is to play in the arts, for it opens horizons for you as an artist”. He does not consider himself to be like famous Arab writers who started out as poets and then turned novelists.

“I am different,” he says. “My first book, The Beautiful Creatures of Fadhil al-Azzawi, was prose, or something between poetry and prose. My second book, Cell Block Five, about my experience in prison, was also prose.” He adds that in 1971 it was important to write about prisons and dictatorship in the form of prose, but at the same time he continued to publish his poems. People in the Arab world considered him more of a poet than a novelist.

Fadhil al-Azzawi moved to Germany in 1977. He was able to obtain a scholarship to study there when he felt that he could no longer stay in Iraq if he wanted to be a free writer. Though he was well known in Iraq, there was huge pressure on intellectuals to be in line with the Baath Party. His decision came after he delivered his poem: ‘I am the cry which the throat will free me’ at the Society of Arts in the presence of around 600-700 people. “I had sent it secretly to Adonis at the time,” he said. “I read it there, but it was banned in Iraq. The next day, they came to arrest me.”

Germany was a temporary way out. It was a means to defend al-Azzawi’s will to be a free writer, even though it was equally difficult to write there. While he was in Germany, he continued to produce poems and articles, which he sent with friends. They were published in Beirut or Cairo or Syria, never in Germany at the time. Though there were many attempts to send him back to Iraq, he struggled to remain. He considered Germany a waiting place until he could figure out what to do next.

As a journalist for the Arab Press, al-Azzawi travelled extensively and wrote about England, Europe, Germany, France, Cyprus, Istanbul and many other countries. He worked as a cultural journalist, travelled around the world and wrote hundreds of articles. In 1970, he was in London for a week or so and he met Salah Niazi and Adonis and Tayeb Saleh. He was also interviewed by the BBC. Collecting his journalistic articles and interviews is one of al-Azzawi’s dreams but an almost impossible feat, they are so many.

Fadhil al-Azzawi is currently working on several projects at the same time: A book, The Man who sees in the Darkness; a collection of his poems, and a book of his travels around the world. He is also trying to write the novel of his life. He wants it to be the culmination of his work, the best that he can do. This work is not meant to be a memoir. He has already written memoires, and he has written about his experiences facing death, and about his travels. “I write all the time,” he says, “even when I sleep.”

There was one poem that he conceived entirely when asleep. He woke up the next morning and wrote it all down word for word. He has attempted to collect many of his poems, though he lost many through the years, whether after he left prison or when he left Iraq. At one point, he gave his poems to his mother and told her to burn them.

Al-Azzawi continues to write and produce, poems and stories and memoirs and he feels the importance of renewing himself, so he writes and rewrites. He says: “Sometimes you think that what you’ve written is a great idea and then you reread it in the daylight and find that it’s rubbish… I write a text and then try to destroy it, to create another text and then destroy it.” He has done this with The Beautiful Creatures of Fadhil al-Azzawi. “I work on them to make them better, he asserts. “Why do we think that when we write, what we write is holy?”

For example, many years after he wrote his original The Last Dinosaur, he wrote another version, which has not been published. He has also taken ‘The Eastern Tree’, a collection of poems in Arabic, translated them, changed them and tried to improve them.

The fascinating discussion in the presence of such a prolific author was followed by al-Azawwi’s reading of his poem, ‘The Lion and the Apostle’, from his Miracle Maker in both Arabic and English. It was followed by a reading of ‘Toasts’ from the same collection by Margaret Obank, Banipal co-founder and publisher.