An Encounter with the True Meaning of Ashura 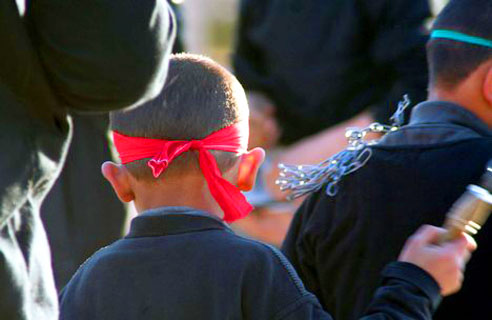 As I sit in my balcony enjoying a balmy winter evening in Bahrain, three very different sounds compete for attention. To my left, a raucous party blaring out from a nearby apartment block – Filipina girls having a rare old time singing Christmas carols. In front of me, shouting from a football game at a nearby recreation ground. To my right, the mournful sound of an Ashura ceremony – drums and cymbals in a slow rhythm, a Shia cleric reciting verses of lamentation in a strong baritone, and a choral response from the faithful. In an island of tolerance, a very Bahraini tableau.

We are in Muharram, the first month of the Islamic calendar. The tenth day of Muharram is known as Ashura – which is Arabic for tenth. For Muslims of all schools of thought it’s a special day. For Sunnis, Ashura marks the day on which Moses (known as Mousa in the Koran) and his people escaped from Egyptian servitude by walking through the Red Sea, parted by divine intervention. For them, it’s a day of fasting.

For the Shia, Ashura and the ten days preceding it are days of lamentation for the death of Husayn, the third Shia Imam and grandson of the Prophet Mohammed. At the Battle of Karbala, Husayn and many members of his family were vastly outnumbered and killed by the forces of the Sunni Caliph, Yazid of Damascus. His fall crystallized the schism between the Shia and the Sunni branches of Islam. This was rooted in a dispute about the legitimacy of competing claims for spiritual and temporal leadership of the Muslim world between Husayn, as a direct descendent of the Prophet, and the line of successors chosen from the Prophet’s companions.

Here in Bahrain, at least 65% of the population are Shia, so across the island, communities gather to lament the passing of Husayn. A few nights ago I accepted the invitation of a friend, Mohamed, to visit the Islamic Awareness Centre Muharram Camp near the Manama souk. For the first ten nights of Muharram the Centre is the venue for gatherings to commemorate and explain Ashura and the suffering of Husayn. In a large courtyard there was a tent containing a library of commentaries in many languages explaining the meaning of Shia Islam. At a nearby table, women volunteers offered free refreshments – sandwiches, cakes, tea and coffee. Next door was a sheltered auditorium where a scholar in a white turban and black robes was seated on a podium in front of a few hundred people – men on the right and women on the left.

The scholar was reciting Arabic verses in long, slow incantations. When Mohamed joined me, he explained that the speaker, Idris Samawi Hamid, was an American from Colorado with a degree in Physics and a doctorate in Islamic studies. Although the majority of the gathering appeared to be Arabic speakers, the scholar started speaking in English. He surprised me by commenting that great strides have been made in expressing the meaning of Ashura in English – most Muslims I have met have emphasized the purity of the language of the Koran, and therefore the impurity of translations into other languages.

He spoke of the Battle of Karbala and the tribulations of the family of Husayn. Karbala, he said was symbolic of the struggles we face in our daily lives when dealing with adversity. As he continued on the theme of breaking through from observance to true acceptance in word, deed and spirit of the message of Islam, I was struck by the underlying mysticism of the faith he was describing. Western perceptions of Islam tend to focus on the observance of ritual and behavior mandated by the Koran and Hadith. Yet here was a man talking in a language that any mystic would understand – transformation of the inner person and communion with God.

As the scholar’s address was coming to an end, my friend took me to a nearby street where we could hear the drums of a procession. At the front was a pick-up truck with loudspeakers. The leader was singing to a slow, rhythmic drumbeat. Following him was a line of around fifty men and boys dressed in black. In time to the rhythm, the followers were brushing their backs with flails made of gold beads. This, and hundreds of other parades around the island, was a precursor to the mass marches on the day of Ashura, in which many followers beat their chests and often draw blood with real flails. Lamentation and guilt at the failure of their ancestors to prevent the wrong done to Husayn and his family.

I’m not a Muslim. Nor am I a theologist or a mystic. In the two hours I spent listening and watching, I couldn’t begin to understand the intricacies of Shia theology. But I was struck by the gentle emotion of the occasion, and by parallels with the Christian observance of Easter. Those who look askance at the ritual self-mutilation practiced by some Shia at the height of the Ashura observance should think also of Easter processions in many devout Catholic communities around the world, some of which involve ritual crucifixion. Themes of guilt, redemption and inner contemplation are common to both faiths. But the raw emotions and seeming harshness of the climactic Shia observance of Ashura were not in evidence, and I was touched by the warmth of the welcome I received.

During my time in the Middle East, I have mingled both with Sunni and Shia Muslims. Images of Islam reach the West via TV, YouTube and the print media – the Haj, Ashura and Ramadan. Historical and current events frame our picture of Islam – the Muslim conquests, the Golden Age, the Crusades, the fall of Constantinople, the Ottoman Court, and today, jihad, terrorism, the Taliban, veiled women, Iran, sectarian strife and Iraq. In the West, we fuel our paranoia by seizing upon messages of hatred rather than love. And that hatred is often reciprocated.

For all the posturing of politicians, propagandists, sheikhs and scholars, I also see millions of members of the human race who wish to live their lives in peace and prosperity without harming others and imposing their beliefs upon them. And when the crises of today pass into history, to be replaced no doubt by others, it will still be the common humanity of people like those I met the other day that will give us hope for the future.

Let’s not forget the people of good will.