‘Ambulance or Hearse?’: Life and Death in the Atlas 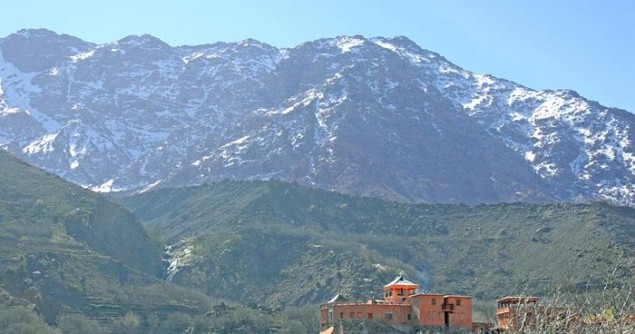 We recently heard the sad news of the death of Habiba Amelou, a baby little more than a month old, whose small body couldn’t cope with a winter freeze in the Middle Atlas Mountains. Many of the villages in the area are extremely remote, with sometimes little access to medical help. Imlil, a village in the High Atlas Mountains, the Association Bassins d’Imlil, a local association covering the seven villages of the Imlil Valley, have made a major difference in the medical services of their area.

In the remote, and even not so remote villages of the High Atlas Mountains, medical assistance of any kind is rarely close to hand. Because of this there have been a number of deaths over the years, particularly during childbirth, due to lack of transport to Asni, the nearest town with a maternity clinic, or on to Tahanoute or even Marrakech for more serious cases. One of the most important projects that the Association Bassins d’Imlil has instigated is the provision of an ambulance to reduce these all too avoidable mortalities. The ambulance has been a life-line to many, particularly those in the most remote valleys who might otherwise have to wait many hours for medical assistance. But there is another ‘ambulance’ that receives scant publicity, and fulfils a role that most of us don’t want to think too deeply about. It is a hearse, on call twenty-fours hours a day, seven days a week, just as the regular ambulance is, but, by the nature of its occupants, it fulfils a more discreet service.

The way Abderrahim Ajdaà handles his ambulance as he tackles the hairpin bends of the rough track that zigzags precariously up from Imlil to Armed, the highest and largest of the villages that form the Association Bassins d’Imlil, you would think he was still driving a taxi around the roads of Asni, seventeen kilometres away. After eleven years driving over some of the roughest terrain in North Africa’s highest mountain range, his confidence is built on experience. As it’s my first trip I spend a fair bit of my time concentrating on the Moroccan flag on its stand taped to the dashboard, and try to ignore the sheer slope of the mountainside, so close that I can’t even see the edge of the road from the passenger seat. Every pedestrian, mule, Jeep and truck gives way as the ambulance climbs the narrow road. After all, it may be someone in their family it’s on its way to.

We’re not on a house call or emergency today, but Abderrahim is demonstrating in a practical way his daily round. The road ends at a flat area of rough ground, where the Reyara River bubbles and sparkles languidly before picking up pace on its way down into the Imlil Valley below. Across an almost non-existent ford is Armed, a village of almost two thousand souls, and Abderrahim points out the pharmacy, closed for the last eight years due to lack of money.

If a helicopter is needed for a mountain rescue on Jbel Toubkal, the highest mountain in North Africa, this is where it lands, on a piece of flat land beside the river, with the patient being transferred to Abderrahim’s ambulance for the onward journey down the mountain to Asni or Marrakech. But ‘flat’ doesn’t mean ‘smooth’; the uneven surface makes for a rocky and tricky landing. When the river is in flood – and people shouldn’t be on the mountain anyway – there is nowhere for the helicopter to land, and Abderrahim has to gather a team of villagers to bring the injured down by stretcher.

In more general medical situations Abderrahim takes the first call. His main work is ferrying expectant mothers to the maternity clinic in Asni, or the hospitals in Tahanoute or Marrakech to give birth. One person is allowed to travel with the patient in the rear of the ambulance. The next most common is attending accidents, mainly motor accidents, where he’s often first on the scene, even before the police arrive. Abderrahim has been trained in first aid, but the ambulance has limited equipment and if he thinks the patient needs a nurse or doctor they will be taken to the clinic at Imlil. The resident nurse, Hamid Asbayo, calls the doctor if necessary, and the patient can be treated there. If there are complications, Abderrahim makes the sixty kilometre drive to the hospital in Marrakech.

When the Association Bassins de Imlil put forward the idea of buying a hearse in 2010, Hassan Bouyenbaden volunteered to be its driver; on call day-in, day-out, just as Abderrahim is. When Abderrahim is unavailable to drive the regular ambulance, Hassan steps in, but most of his clients are at the opposite end of their life-cycle to those of his fellow driver. At fatal road accidents, he is required to attend with the police, bagging the body and removing it to the morgue in Marrakech. Fortunately this kind of situation is quite rare, and the majority of the people he transports have died of natural causes. For those from the villages of the valley who die in Marrakech, Hassan collects the body from the hospital so that the deceased can be buried in his or her homeland.

Most of the inhabitants of the locality are strict Muslims, which means that no male outside the family other than medical personnel may touch a woman. Dispensation is also given to Hassan, as he is required to handle the body in order to put it in his ambulance. Sometimes family members are too distraught to deal with the death, and Hassan has to quietly seek help from others for the removal, without overstepping the bounds of propriety. What helps in this situation is that he has lived in the valley all his life, and many of the people he is called to attend were his friends.

“At first it used to upset me, seeing my friends dead, but eventually I came to realise that we all die, and surely it’s better to have a friend attend to you than a stranger. It’s no problem for me now.”

Women will be returned to the home to be ritually washed by their female family and friends, before being enshrouded in white cotton or linen cloth; men will go straight to the mosque, where their male family performs a similar service. Sharia law calls for the burial of the body, usually within twenty-four hours. After prayers at the mosque the deceased will be taken to a cemetery, although not one with headstones and mausoleums a westerner might recognise. In Imlil it is simply a square plot, only distinguished from the rest of the bare hillside by a fence to keep out wandering goats.

One of our regular contributors, Derek Workman is an English journalist living in Valencia City, Spain – he admits to a love of Morocco and would love to up sticks and move here. To read more about life in Spain visit Spain Uncovered