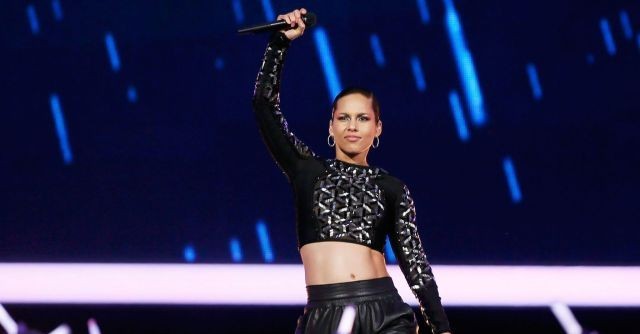 Advocates for Palestinian human rights harshly criticized singer Alicia Keys’ recent visit to Israel, where the pop star visited an organization founded by Israeli President Shimon Peres and performed with a self-proclaimed “cultural ambassador” for Israel. The U.S. Campaign to End the Occupation, which had urged Keys to respect the Palestinian call for boycott and cancel her show, issued its critical statement yesterday.

The criticism comes a week after I reported on a photograph that showed Keys with a woman with direct links to a group called Thank Israeli Soldiers, which sent warm winter gear to Israeli soldiers fighting in the Gaza Strip last year and proclaimed its support for the Israeli Navy’s attack on the Mavi Marmara in 2010. The U.S. Campaign reports that an American activist visited the Thank Israeli Soldiers office yesterday, and was greeted by the same woman who was in the photo with Keys.

“Keys claims to support human rights, and she talked about playing to unify audiences in ‘peace and love,’ but instead her actions conveyed support for Israel’s government, military occupation and elites that impose a violent, discriminatory regime of oppression and apartheid on the Palestinian people,” said the U.S. Campaign’s Anna Baltzer in a statement.

Here’s more from the U.S. Campaign to End the Occupation:

Keys’ visit to Israel was proudly tweeted at least eight times by Israel’s Ministry of Foreign Affairs, and various Israeli consulates. Showing the importance the government attaches to major artists visits in light of Israel’s growing cultural isolation, Israel’s consulate in Philadelphia tweeted, “Alicia Keys blew Tel Aviv away at her July 4th concert, and Rihanna is next! Will you be at her October 22nd show?” There is no evidence that Keys and her representatives objected to the use of her name and performance by Israeli officials to the benefit of the state of Israel. However, Keys and her legal representative, the firm Ziffren, Brittenham, LLP, whose partner David Byrnes is also an advisory board member of Creative Community for Peace, took legal action to remove from Youtube a video made by activists of Palestinian women protesting set to the tune of “Girl on Fire” that called on Keys to cancel her show in Israel. CCP later asserted that the activists were using Keys’ “work for their own self-gain.”

Israeli media and the founder of the Israeli technology company Natie reported that Keys visited the Peres Center for Peace, an Israeli organization accused by Palestinian civil society of being “a leading colonial and apartheid institution.” Shimon Peres, Israel’s President and the center’s founder, has cultivated the aura of a champion of peace, despite, as just one example, having ordered Israel’s military assault on Southern Lebanon in 1996 that resulted in the massacre of 102 Lebanese civilians and wounding of hundreds more who had sought refuge inside a UN compound in Qana. The Peres Center has been denounced by Palestinian civil society organizations as “neither effective in bringing about reconciliation, nor desirable, and “hindering the path to just peace,” and was characterized by an Israeli analyst as “patronizing and colonial.”

The group also says that Dr. Rachel Mattson, who was recently in Palestine on a delegation, witnessed Keys’ band members being harassed by Israeli security. Mattson said:

I found myself being interrogated next to Alicia Keys’ sound engineer. He was Latino. I saw 2-3 Israeli security staff harassing him, aggressively demanding that he prove that he participated in the concert and hand searching all his equipment. Security started my interrogation after his and I still finished before him. At the gate later I ran into Keys’ other band members, all African American, who told me they had all experienced problems with Israeli security.