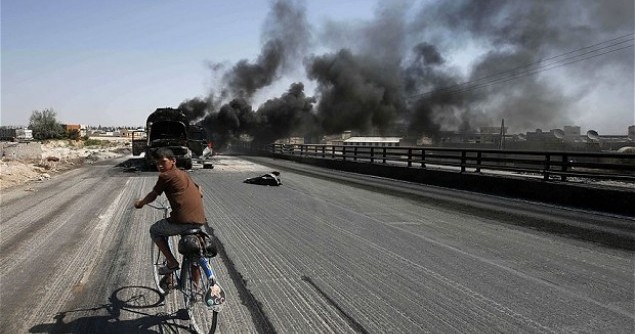 “Gerald Lynch blinked at the transition from the late afternoon sunlight to the cool darkness of Aleppo’s covered souk. Wearing jeans and a plain white t-shirt with scuffed sneakers and with a slim bag slung around his neck and over his shoulder, Lynch felt like a tourist.

The souk was noisy, a bustling tide of people packing the narrow street, a motor scooter welded to a trailer forging its way through the press. The stalls were brightly lit from inside, neon strips hanging crazily from twisted wire stays and broken fittings, sacks of flour, wheat, spices and charcoal lined the way, poor stores selling charcoal, tobacco, spices and sweets butted up against collections of pans and kitchen implements. Lynch slipped through the throng feeling lost as he tried to recall his way around the Ottoman labyrinth. He hadn’t been back to Aleppo in ten years and more and hadn’t seen The General since the end of the Lebanese Civil War. He felt old as the scents of the souk took him back: oudh incense burning, baking, spices, exhaust fumes. He passed a man butchering a lamb hanging from its back legs on a great hook, its viscera shining as the knife sliced into it.

He turned left from the busy street, passing shops stacked high with bolts of cloth, tailors working on ancient-looking sewing machines that whirred away over their voices raised in cheerful conversation. There it was, just as it had been all those years ago, the little shop front hung with sequinned belly-dancer costumes and kandouras decorated with dangles of little brass coins.

Lynch stepped into the shop, pushing aside the plastic strips hanging in the doorway. The sound inside was muffled by the clothing hanging on the walls, towards the rear there were shelves of gold-decorated bottles, packets of solid bukhour perfumes and mubkhars, the little jars used to burn incense. Sitting behind a tin desk with a glass top was a thin man. His bulbous, mouse’s eyes flitted constantly around the room, settling on Lynch then darting away in an instant.”

From Shemlan – A Deadly Tragedy

It’s strange to see Aleppo in the news. It’s even odder to see it under bombardment, fighting in its streets and in the long, cool alleys of the world’s greatest covered souk. The picture that has always sat as the masthead of a certain silly little blog was taken during one of my long wanders around in that very souk, a place where you could still feel the heartbeat of an older, more basic Middle East. At its heart are Ottoman mosques and madrasas, a dark, rich 14th century Armenian orthodox church.

Over the years living in the Middle East, I suppose you get used to seeing places you know and love, places where friends live, embroiled in conflict. F16s glittering above Beirut’s corniche, tanks rolling through Kuwait’s boulevards, police firing on demonstrators in Cairo and bombs smashing through hotels in Amman all seem so remote on a TV screen and yet have a horrible resonance when you’re involved with the places and the people living there. You can just hope they’re okay, that the violence passed them by. That they got out before it got too bad. That the water and electricity stay on. You send messages and don’t get replies or perhaps reassurances that, yes they’re okay and it’s not as bad as it seems on TV.

It’s never as bad as it seems on TV. I vividly recall meeting some Americans exhibiting at the Dubai World Trade Centre just after the Gulf War (the Kuwait one, not the Iran/Iraq one) who had come out to help rebuild the Gulf. They’d seen it on CNN, in flames. All of it. And they were gonna help rebuild it all. I did wonder how long it would take before the penny dropped. I was chatting to friends in Aleppo a few days ago and being told it was ‘no biggie’. Now they’re in Amman.

UNESCO is worried about the damage, apparently. I see what they mean – Syria is home to so much that is key to our history, from the crusader castles through to the ikons in that church. But I’d go worrying about the people first – the people in that photo, buying spices in the souk – and over two million more like them