A Yemeni Adventure: Wet Aden Heat, Smell of the Sea 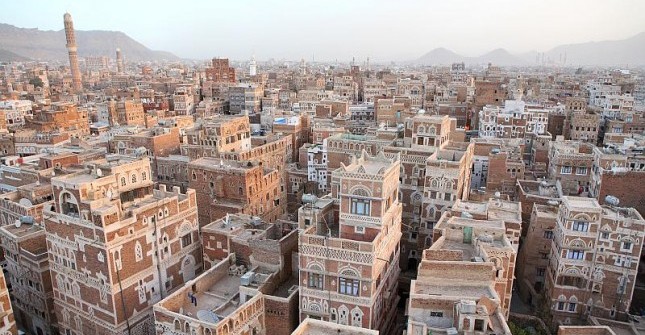 We went to the Somali quarter early that summer evening which was a congested collection of narrow streets with make-shift, open, breeze-proof garage like buildings that lined hard black earth thoroughfares. Some were restaurants, stores (some like the shanty sheet metal huts and other split level fabrications reminiscent of photo-news reports in the days of South African Apartheid) and just places men played cards under the yellow hue of bare light bulbs in walled airless spaces of sheets and blankets on flailing nylon twine.

Garbed women moved loads in an act of handless balance on their heads. Like miracles of grace, they moved purposefully through the byways of loitering, walking and sitting men engaged in the easy talk people do when their days and evening ended with the sunset.

“Yes, they have a pretty good reputation”, said my friend’s friend– a lawyer or law clerk or something that supposedly could give us the ‘skinny’ on the legitimate businesses. The fact he knew little about anything that wasn’t questionable confirmed most of what we had heard. At the time, Ali was still president and Yemen was becoming one of those places the news reported fighting in the hills and such.  Of our band of three, Khalid was most pensive . His quixotic search for a Yemeni who owed him money seemed as foolish as one studying to be God. I told him to forget it but he kept asking; looking and telling us why he went into business in the first place and the lame excuses he heard before the guy stopped answering his phone.

When Muhammad and I had concluded our business, I called Yemenia to double check our flight back to Sana. Khalid felt if he patiently’ just hung in there’ on his search for his money, the matter would work out in his favor (Canadians are so optimistic); so he decided to stay until he realized for himself we were right—your time and effort is worth more than the aggravation.

No one told us we needed to confirm that the return ticket was paid for 24 hours before the flight or be pushed out for the sake of the ever teeming crowds leaving for Sana. We were warned by the travel agent – but I thought just saying “I am confirming now” at that time would do it. Maybe he thought I was kidding; but more than likely he didn’t care. He had my money.

I had been there only two days and had already grown accustomed to the wet Aden heat and the heavy smell of the sea in the mythic presence of a slight wind. Truthfully, I really wouldn’t have mind all that much staying a week or so longer. Eventually, I would run out of money as well as lose my job and perhaps the adoration of my wife and seven children expecting me to show up and be what fathers and husband are.

After spending an hour having manic urban Arabs jump my place in line, a chubby woman at the travel agency– perhaps intrigued with my flat, American accent gestured me to a seat at her desk.

“Your reservation was cancelled. You should have called,” she said with a smug, but apologetic tone.  There were no other flights to be had. Muhammad tugged my sleeve like he would to stall my forward motion to argue my point as was my habit in such situations.

An so it was, the next morning we made the bus on time; though my experience suggested everything runs at least a half hour behind the schedule posted (which proved to be the case). It was one of those huge touring coaches with overstuff seats made for the Asian contour and that would have been retired in the states ten years ago.

“Twenty hours for twenty riyals”, said Muhammad grimly. The air conditioning was traditionally set on the lowest setting for local comfort and made trip next to Muhammad like being cooked on a slow turning spit. He said the check point soldiers might stop the bus and ask questions but our brown skins and traditional clothing made that unlikely for us. As the bus drove up through the mountains, which were covered with fields of mostly ‘Gat’, a green weed that Yemeni swear sticking a wad in their teeth, cheek and gum gets them high. I took no comfort that we were on our way and I would have plenty of time to catch my flight back to Saudi.  Deadlines and schedules were like vague guidelines in the Middle East. The only certainty was that life there was uncertain.

We saw veiled women tending fields of gat with an occasional boy or middle age man herding goats near the road side. Unlike the city, no one appeared unoccupied. The men had a rough look with bronzed skin dulled by the dust of the mountains and a lofty dignity that reminded me of a Norman Rockwell painting with a similar working class theme. The towns the bus roared through seemed a bit like the old wild American, ancient with the small uneventful history of families living and travelers much like us passing through.