A Summer Tonic: Mahfouz’s Belief in ‘the Power of Good’ 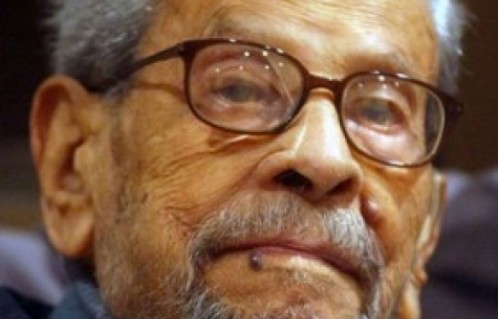 I was doing a bit of research for an interview about Naguib Mahfouz: This is his centenary, after all.

So I was up to my elbows in material, as not only did Mahfouz write extensively, he was also extensively written about. In among the pages, I took the time to re-read the great man’s Nobel lecture. It made me wish he were still around to be balanced, thoughtful, good-natured, and optimistic (despite that Edward Said was, I think, right when he said: “The result is that when you get to the end of one of Mahfouz’s novels you paradoxically experience both regret at what has happened to his characters in their long downward progress and a barely articulated hope that by going back to the beginning of the story you might be able to recover the sheer force of these people.”)

Anyhow! At least we still have the echo of Mahfouz’s optimism in his words:

In spite of all what goes on around us I am committed to optimism until the end. I do not say with Kant that Good will be victorious in the other world. Good is achieving victory every day. It may even be that Evil is weaker than we imagine. In front of us is an indelible proof: were it not for the fact that victory is always on the side of Good, hordes of wandering humans would not have been able in the face of beasts and insects, natural disasters, fear and egotism, to grow and multiply. They would not have been able to form nations, to excel in creativeness and invention, to conquer outer space, and to declare Human Rights. The truth of the matter is that Evil is a loud and boisterous debaucherer, and that Man remembers what hurts more than what pleases. Our great poet Abul-’Alaa’ Al-Ma’ari was right when he said:

I finally reiterate my thanks and ask your forgiveness.

And if you haven’t seen this: