A Saudi Hand in Iran? Possible But Unlikely 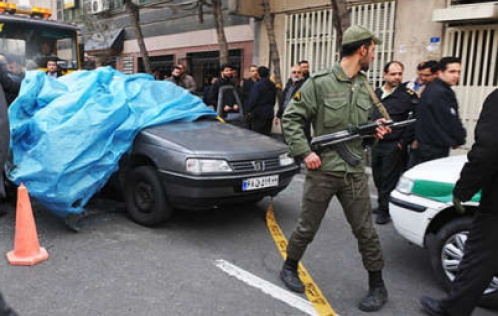 A couple of times recently I’ve been somewhat annoyed with myself for not thinking outside the box. Last night at a lecture by James Piscatori, he quoted someone coining the phrase ‘internal sovereignty’ referring to the place of Islam in society in much of the Middle East. What a wonderful phrase. But why didn’t I think of it? I’ve been reading and writing about sovereignty and the Middle East for years in one form or another yet this notion never occurred to me.

Again today, the superb Times columnist David Aaronovitch asked why no one seemed to be suggesting that perhaps Saudi security services might seek to bump-off Iranian nuclear scientists. What a good point. I don’t think it’s likely, but it’s an excellent point that I feel I ought to have thought up myself. But c’est la vie.

The underlying principle that KSA would want to disrupt Iran’s presumed acquisition of nuclear technology is, of course, sound. Reality aside, KSA’s elite believe that any such change would immeasurably damage their  interests. Indeed, if Iran were to pass the threshold it seems to me a virtual guarantee that Saudi Arabia would buy a bomb ‘off the shelf’ from Pakistan, probably holding it as Israel does: making sure everyone knows they have it, but not announcing it.

However, I am sceptical as to whether in reality KSA security services could launch such an attack.

Like most Gulf States, KSA has outsourced its security to America. This has several key corollaries.

Primarily, this means that there is little pressure on KSA’s defensive forces to actually be good at what they do. This report, though old and referring to the GCC Peninsula Shield, highlights some of the typical problems that befall much of KSA’s armed forces. Problems of communication, motivation and discipline within the armed forces are legion. Indeed, when KSA sent its forces to attack the rag-tag Houthis in 2009-10, they were embarrassingly routed despite decades of expensive military acquisitions.

The key question is whether this attitude has spread to the security services too. Here – I confess – I am in two minds. For certainly KSA security services have reportedly become really rather efficient in recent years, particularly domestically. The Al Qaeda threat which rocked the Kingdom from 2004 onwards has been all but eradicated and the elite’s grip on domestic security appears to be strong.

Yet at the same time there are egregious examples of crass errors and a profound lack of professionalism. One might suspect that at the height of Al Qaeda attacks and at the world’s largest oil processing plant, security would be professional and competent; yet though Abqaiq’s central facilities were not breached in 2006 and the attackers were stopped by security measures, Prince Muhammad Bin Nayef subsequently said ‘we did not save Abqaiq; God did’. Hardly a ringing endorsement of KSA’s facility security. Moreover, US wikileak documents are replete with Saudi officials scrabbling to get US help to assuage their various security vulnerabilities. One’s conclusion must be that a direct and real threat is not enough to guarantee meaningful speed and professionalism of action.

Aside from such rationalisation, after having lived, studied and worked in this region for many years now, the notion of the Saudi security agency (the General Intelligence Presidency, for example) meticulously researching, rehearsing, planning and executing such a risky, dangerous and deft mission just seems highly unlikely. Never have I come across any snippet, source or story indicating that Saudi’s security agencies have attempted something like this before or would be capable of doing so. Obviously, this is not to say categorically that they did not, but to note that such an action would be wholly out of character and involve far more subtle and professional skill than is typically ascribed to such organisations.

Lastly, factors such as the proximity between Saudi and Iran, the very real risks that the operation could have gone wrong and the innate conservatism at play within the Kingdom suggest again that KSA was not behind such an action. The potential repercussions were Saudi found to be plotting such an operation are immense and would surely have found ill-favor with the geriatrics running KSA.