A Region in Revolution, With One Constant – Change 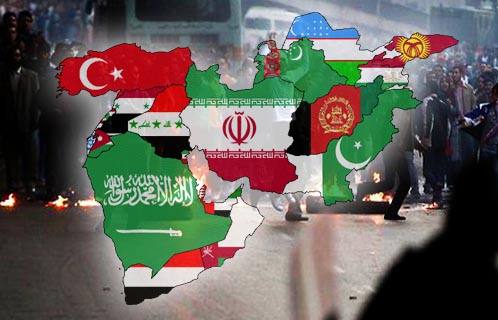 Blogging about politics can be an incredibly depressing pastime. Anyone who’s resignedly thrown a newspaper down on the table in disgust can understand that.

Lebanon is going through the mill once again, with the coalition government falling apart, threats of mass protest, indictments for murder / complicity in murder hanging over one party and the usual screams of outside interference. For a while last week bubbling just under the surface was the possibility of violence. Thankfully and, perhaps predictably, the threatened confrontation didn’t occur.

Nevertheless, the country sits on tenterhooks and the most optimistic of outlooks seems to be ‘It’ll pass.’ ‘It’ll pass’ isn’t exactly a clarion call for confidence …

In the meantime the economy continues to be in the pan, with investors (understandably) twitchy about the prospects over the coming months.

While it’s true that this is democracy in action, it’s a clear reminder, to me at least, that people, leaders and voters alike, can be somewhat blind and continue to be ruled by self-interest. But that’s just me, and I’ve never thought that ‘democracy’ or ‘democratic values’ are the great panacea they’re held up to be. Yes, I’m aware that last statement will stick in the craw of many, but there it is.

And here I am, so far ignoring the great silent elephant in the corner … Egypt … or more specifically, Egypt and Tunisia, Yemen and, to a lesser extent, Jordan.

The Middle East is certainly a fascinating place. As a student of international relations and security I grew up being taught that the region is a place of strongmen, religious zealots (of all creeds) and a hotheaded tendency toward conflict. While the last two are still very much alive and well, the first pillar seems to be under attack.

Since moving to the region in 2004 I’ve witnessed the ‘peaceful’ ejection of the Syrian military from Lebanon (I say ‘peaceful’ as the protests were sparked by killings, or rather one killing in particular); Public protests in Iran which were initially quashed, before the government got cold feet and applied softer pressure to restore the situation; The potential split of Yemen; The ejection of the Tunisian leadership amid hordes of people on the street and, finally, the ongoing protests in Egypt.

It’ll be nine years this summer since I first came here for more than a family holiday and around a decade that I’ve been (politically) interested in the region.

I am by no means claiming that the region stands on the cusp of a revolutionary wave (my feelings of disappointment following the Cedar Revolution and the continuation of the old client-patronage system and the quashing of protests in Iran have led me to be cynical), but there’s certainly something in the air.

Iran and Syria are certainly as strong as they ever were when it comes to the maintenance of their particular governments, but then, who would have honestly claimed to have seen the situation in Egypt coming? Precious few I’m willing to bet.

And that’s the point – this region is prone to flux like no other in the world. The 2006 war between Israel and Lebanon, in terms of the speed of which events can spiral out of control and more recently the Iranian, Tunisian and Egyptian movements, highlighted the inherently unstable nature of regional politics.

But then we come to the fear, the fear that, while ‘democracy’, or some form of change for the better, is within arm’s reach for the people of these various countries, that different hard men, or the religious fundamentalists will end up holding the reigns. The fear is this – that they will end up exchanging one master for another, maybe not tomorrow, but in the near future.

Nevertheless, the events of the past few years remind me of a recurring theme that I first came across during my reading on security and politics, that real political change is achieved through conflict.